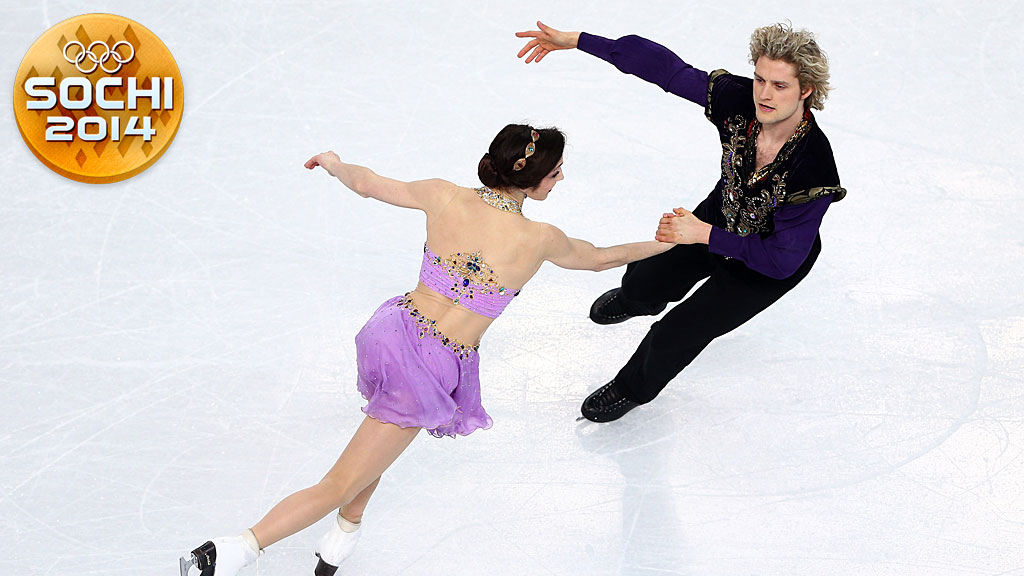 With her Anna Wintour bangs and her infuriatingly youthful skin, Marina Zoueva could pass as the editor of a high-fashion magazine. She would look precisely in place perched in the front row of a runway show, black Chanel purse on her lap, skinny-panted legs crossed, and black high-heeled feet tapping with interest or boredom. Instead, the 57-year-old Zoueva was in Russia, the country where she grew up, to observe a different kind of artistic presentation: On Monday night, she leaned over the padded boards inside the Iceberg Skating Palace in Sochi and watched her ice dancers perform the choreography she’d dreamed up.

There were Alex and Maia Shibutani, the brother-sister pair known as the Shib Sibs who (thankfully) lack romantic charisma but compensate with their athletic spins. For them, Zoueva designed a snazzy routine around Michael Jackson that crescendoed with “Thriller.” Sadly, a skate stuck on a sequin ruined one of their lifts, and a British team had performed earlier in the evening to a different mélange of MJ tunes, which kind of felt like two people showing up to prom in the same dress.

There were Canadians Tessa Virtue and Scott Moir, the gorgeous reigning gold medalists from the Vancouver Games (and reality TV stars), who all but dissolved into each other’s arms as they glided around and flew aloft to a selection of music by Alexander Glazunov. Their chemistry was so electric, their bodies so entwined, that you almost wanted to tiptoe backward to give them some privacy.

And, skating last, there were Meryl Davis and Charlie White, who earned silver four years ago and had made it no secret that this time around, anything less than gold would disappoint. For months, as they trained at the Arctic Edge arena in Canton, Michigan — now one of the world’s great hotbeds of ice dancing talent and instruction — Zoueva constantly implored the two to throw even more passion into their free dance.

The routine was designed to tell the tale of Scheherazade, the woman who enraptured a Persian king hell-bent on beheading her as he’d done to a thousand other one-night stands — all in vengeance for being cuckolded by his first wife. She avoided this fate by telling him stories so transfixing that he just had to hear more, night after sleepless night, until finally, years later, he’d fallen in love and made her his queen. It’s an ancient story of temptation and restraint, and in 1888, the Russian composer Nikolai Rimsky-Korsakov wrote a celebrated suite with the plot in mind. His music filled the venue as Davis and White prepared to begin.

Four and a half minutes later, they were both panting. White’s fluffy, floppy blond hair was ever so slightly weighed down by sweat. Davis, who has worked with mimes in the past on her vibrant expressions, looked stricken, nearly blank. They embraced, each holding the other up. “I love you” was all White could say. They labored to the kiss-and-cry area and sat next to Zoueva, awaiting their score. Finally, it popped up with a yellow “1” next to it. That meant gold. 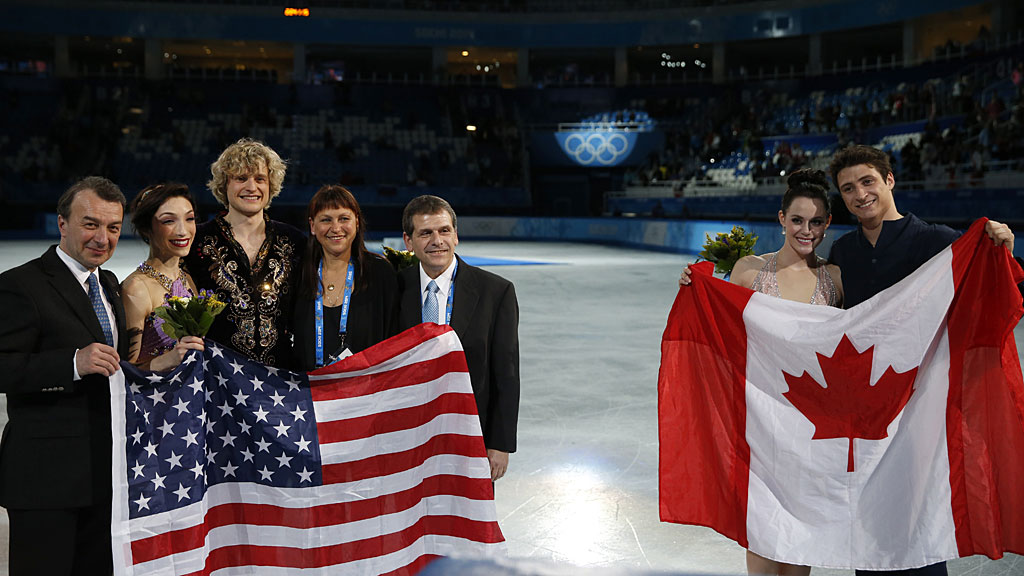 White was about 9 years old, and he was irritated: He’d been ice dancing for six months already, after a hockey coach suggested it would help with his footwork, but now he was being paired with a newbie. Davis was a tiny girl with enormous eyes, shiny hair, and a quiet intensity that enabled her to quickly catch up to her partner. That was more than 17 years ago. Davis was so awkward about making eye contact that a coach put a sticker on White’s forehead and told her to just look at that.

Sometimes you watch Olympic sports and think, How do people get into this? In Davis and White’s case, the answer is that they both grew up in suburban Detroit, where figure skating was and remains enormously popular. As children, they skated at the same club as Tara Lipinski and Todd Eldredge. But ice dancing had never been an American strength. No U.S. team had won a gold medal in the discipline, long dominated by Soviet and, later, Russian teams.

Things began changing a little more than a decade ago, when Zoueva — who had moved to Canada in 1991 from her native Moscow, where she’d worked with Ekaterina Gordeeva and the late Sergei Grinkov — began coaching outside of Detroit. (She operated side by side with Igor Shpilband, though they murkily parted ways in 2012.) She’s a mysterious good witch of a woman. “My dream is to one day have a farm with alpacas,” says one of Zoueva’s bios. “I love red sports cars. I love cruising on my boat called, ‘Marishka.’ I love all types of art.”

The art form in which she is most skilled, though, is ice dance choreography. In 2006, Tanith Belbin and Benjamin Agosto, two athletes coached by Zoueva and Shpilband, won silver in Torino. In Vancouver, Virtue-Moir and Davis-White finished one-two. Working with competitors from either side of the border has led to some strange moments. During the team program in the first week of the Sochi Games, Zoueva hopped back and forth between national delegations in the kiss-and-cry, donning a maple-leafed Team Canada jacket over her minimalist black clothes before swapping into an American coat. 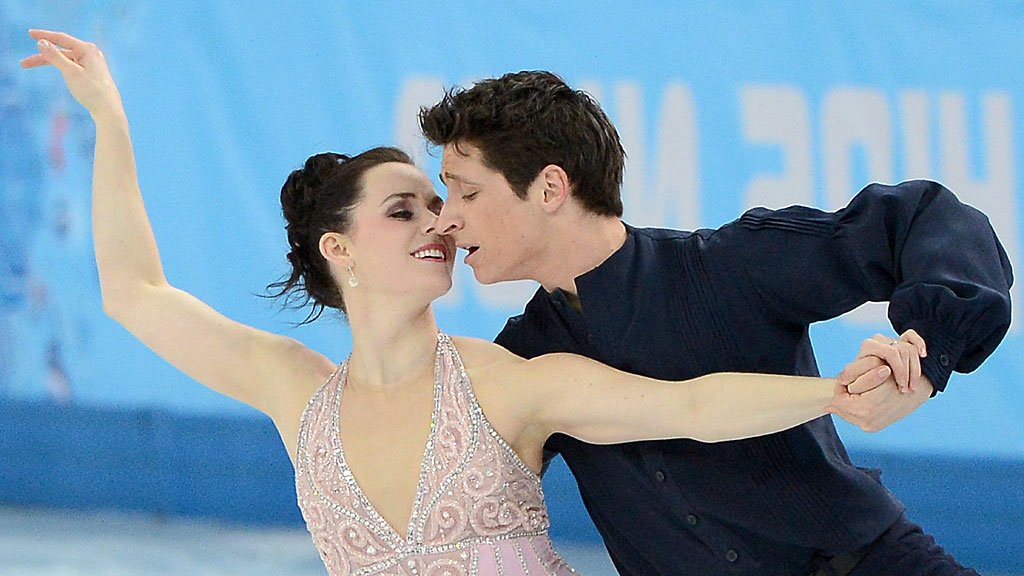 I never thought I’d be saying this, but I prefer ice dance to pairs; the huge throws and spins of the latter are exhilarating, sure, but they sometimes come at the expense of a clean and well-rounded skate. (Men’s singles can suffer from this, too: On Saturday night, pretty much no one could land his ambitious routine.) My memories of ice dance from childhood were from the dark days when every team had to skate a boring, identical program — 20 tangos or fox-trots, one after the next — but that’s not part of the Olympics anymore, and the increased athleticism and originality are obvious.

I don’t know that ice dance necessarily translates all that well to television, as the camera tends to zoom in and focus on the dancers’ painted faces rather than the icy blank palette around them. It’s that negative space, and the speed and grace with which teams move through it, that stands out most when you watch in person. Plus, I’m a sucker for the bonkers costumes.

Truth be told, to my untrained eye on Monday night the best duo wasn’t Davis and White, nor was it Virtue and Moir. It was Elena Ilinykh and Nikita Katsalapov, the young Russian team — she’s 19, he’s 22 — who brought down the admittedly biased house with a brooding and beautiful dance to “Swan Lake.” (The manic fervor in Ilinykh’s eyes as she collapsed on the ice after the performance made Natalie Portman’s Black Swan character seem serene.) They were rewarded with the bronze medal, and will almost certainly be a pair to watch in Pyeongchang four years from now.

It wouldn’t truly be Olympic ice dancing, unfortunately, if there weren’t some ol’ international outrage over alleged corruption. (A “tawdry whore of a sport” is how easily incensed Canadian columnist Rosie DiManno put it.) In 2002, an uncovered vote-fixing arrangement gave new proof to conspiracy theorists who had long felt the whole thing was rigged. Changes have been made to the scoring system since then, but the score sheets now seem more muddled than less.

During the first weekend of the Olympics, the French newspaper L’Equipe alleged that the Russians and Americans were in cahoots to deliver the team competition to the hosts (they did end up winning) and the ice dance gold to the U.S. The veracity of the report didn’t matter, really — the mere suggestion of it immediately gave people reason to doubt. Following Saturday’s short program, Virtue and Moir felt lowballed on their scores, particularly on the Finnstep, a complicated sequence that was invented by Finnish dancers Susanna Rahkamo and Petri Kokko and is one of the backbones of the compulsory short program. It didn’t help matters when Kokko himself tweeted that Virtue and Moir had pulled it off better than Davis and White. But regardless of what went down, the American lead proved too wide to make up on Monday night, and the podium positions from Vancouver were reversed.

The press conference that followed the on-ice flower ceremony was at turns collegial and awkward. The two Zoueva-coached pairs occasionally interrupted one another with inside jokes, and they spoke about the nature of their bond like old veterans reminiscing about time spent in foxholes — only they could really understand their shared experiences. “We’re linked forever,” White explained. But you could sense the disappointment of the silver medalists. “It’s not likely we’ll be calling each other every day,” Virtue said. “But I know when we see one another, it will be like picking up from where we left off.”

The next afternoon, Moir admitted he and Virtue had not been completely thrilled by the diminishing attention they’d been getting from Zoueva in the months leading up to the Olympics. “We weren’t happy and we felt like sometimes she wasn’t in our corner,” he said, adding that they’d been very “blunt” in telling her so.

It made me think back to something that Zoueva had said the night before, when someone asked her if there were any times her skaters had not gotten along. In her accented singsong, her lovely face a mask of ice dancing intrigue, she compared things, as she likes to do, to the rhythms of nature.

A few [hours] before he hurdled G-Man for his unforgettable reverse dunk to claim the dunk contest, Wall made a peculiar bet with Bradley Beal about last Saturday’s college basketball game between his 18th-ranked Wildcats and Beal’s second-ranked Florida Gators ... “I got to go buy me a onesie … and I will wear it to practice and I will wear it all day long,” Wall said.