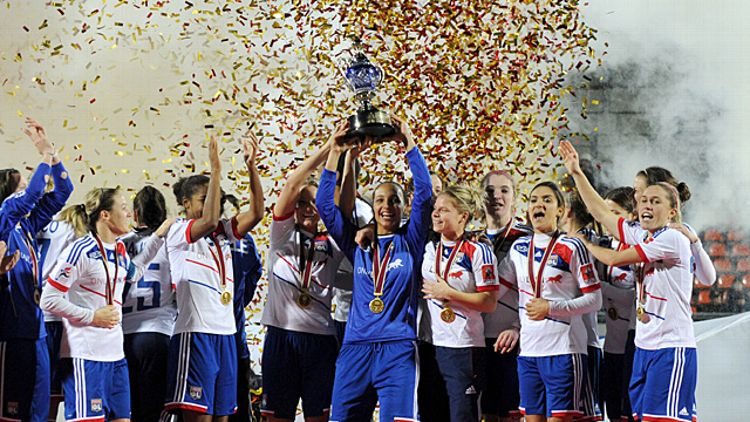 It was all good just a year ago. 2012 was the first year in 13 that Olympique Lyonnais failed to qualify for the Champions League, missing out on the money and spotlight that European competition brings. In truth, the rot had already set in. Lyon hasn’t won the league since 2008, its finances — including yearly turnover, income from player sales, ticketing, and merchandising revenues — have steadily decreased generally from year to year while its payroll and incoming transfer fees, spent trying to right le proverbial bateau, have soared.

If 2008 was the onset of the men’s decline and fall, it was also the year that the Lyon women began to win, to win everything; ecstatically, beatifically, and at a near-comedic rate. Though the club had seen success as top-flight champions since the early 1990s, 2008 saw the coming-together of the team that, today, might very well be the best side — club or national — in the world.

Superlatives are useless in the face of such genteel despotism. The current — and repeating — champions of Europe, Lyon haven’t failed to reach the semifinals of the fledgling Women’s Champions League competition since their debut in 2007-08. In 2010-11, they went undefeated and undrawn in their domestic league (22-0-0), undefeated again in 2011-12 (19-0-3) with a goal differential of plus-116 — yes, plus one hundred and sixteen — didn’t allow a league goal for 11 months, and conceded only three — three! — goals the entire year. Their last Champions League run saw them go 8-0-1 (with a plus-37 goal differential in those games), which included a 2-0 win on cruise control over FFC Frankfurt in Munich and this classy chip from midfielder and French international Camille Abily. It’s a peerless run of form and one that, within the same span of years, is comparable only to that of FC Barcelona — and here I mean the one that features a diminutive Argentine last seen clad in a flashier man’s pin-dot tux.

Of Lyon’s 23 current squad players, 11 are French internationals. Six others have represented their countries at either the senior or junior level for Sweden, Switzerland, Tunisia, Japan, and now, the United States.

Last week, Megan Rapinoe, attacking midfielder, 2012 FIFA Ballon d’Or short-list member, ecstatic goal celebrator, magnificent-scarf wearer, and all-around exemplary American signed a six-month contract with the French champions that, assuming Lyon’s inexorable progress through the French first division and the Champions League, would give Rapinoe a chance to play in women’s soccer’s version of a fantasy team and yet another significant international cup final. That is, provided she is able to work her way into such an embarrassingly talented side.

Alongside the elegant Abily, Amadine Henry, and the Swiss Lara Dickermann glides the gifted playmaker Louisa Necib — “the Female Zidane” for those who simply can’t get over the Marseille roots and Algerian background she shares with the retired Real Madrid and Juventus star. If you prefer your midfielders deep-lying, brimming with style, full of possibility, and mercurial to a fault, then Necib is your huckleberry. (OK: Perhaps the Zidane comparisons are somewhat appropriate after all.) The problem for Rapinoe will be that, if not for a bit more attacking intent, those are apt descriptions of her game as well. That said, there is every reason why a player like “Pinoe,” whose range of passing at times can resemble that of Paul Scholes or Xavi, won’t challenge for a place in Lyon’s lineup. That she is also possessed of a discernible (and delightful) personality — beyond 40-yard outside-of-the-boot pings or minute metronomic exchanges — can only help her (and, potentially, both her new club and the women’s game) to market herself.

Lyon’s dual signings of Rapinoe and Japanese striker Shinobu Ohno (who can now together be called, irresistibly, “Shino” and “Pinoe”) are, in a way, a coup for Aulas, who is after all the owner of the entire OL club — not just the men’s first team. In the absence of any significant January transfers for the men, Aulas has brought in two high-profile foreign players who will further raise the profile of his club beyond the nation’s borders. They will likely sell many (rather handsome) jerseys in France and abroad, and now the American and Japanese media have an incentive to see what’s really good on the Rhone these days. For Rapinoe, who will return to America after her six-month deal and immediately join up with the newly formed Seattle Reign of the National Women’s Soccer League for their inaugural 2013 season, this has the potential to be yet another memorable year. The 2013 Women’s Champions League Final is at Chelsea’s Stamford Bridge on May 23. We all remember what happened the last time someone let Rapinoe loose in one of England’s premier footballing venues. West London, watch for the hook.