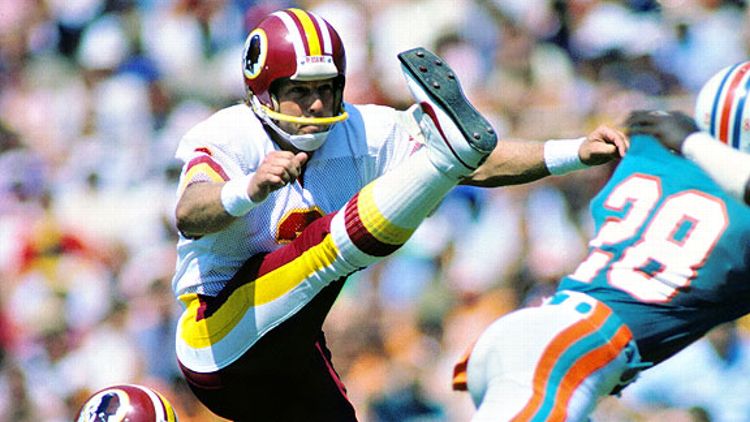 There’s something fundamentally absurd about a place-kicker being named MVP. It’s like a setup man winning the Cy Young, or Ashton Kutcher winning anything. Yet that’s exactly what happened after the strike-shortened 1982 NFL season, when Washington Redskins place-kicker Mark Moseley took home the Associated Press’ NFL MVP honor. He remains the only kicker to have won the award, selected that year over more obvious choices. At first glance, it’s a puzzling decision. How did a place-kicker score such a high-profile honor? To put it another way: What the hell happened here?

If you’re looking for a bright side to the NFL’s current labor mess, it’s that weird things can happen when a season gets shortened. With any luck, the league won’t miss any contests in the upcoming season. If it does, though? Sure, we’ll miss a few fantasy games, but there’s a chance that some unheralded player can replicate Moseley’s miraculous 1982.

The turbulent season was an odd duck even before Moseley made his improbable grab at the hardware. Labor unrest loomed through the spring and summer, but the season started without incident. The season lasted two weeks before players went on strike. When the strike was resolved eight weeks later, each team played a nine-game schedule.

Moseley’s MVP campaign got off to an inauspicious start. To begin with, he was almost replaced. Washington coach Joe Gibbs’ staff told Moseley to not even bother showing up for training camp. His job belonged to Dan Miller, drafted by the Redskins that offseason. Moseley came anyway and was named a starter after Miller imploded in the preseason. He also didn’t handle kickoffs during season. Gibbs worried Moseley might aggravate a muscle pull, so Jeff Hayes kicked off.

On paper, the Redskins’ offense that year looks like it should have been pretty stellar. With Joe Theismann under center and future Hall of Famers at running back (John Riggins), receiver (Art Monk), and guard (Russ Grimm), the team looked a lot like the Redskins squad that would lead the league in scoring the following year. In 1982, though, the offense was a middling 12th in the league in scoring. Theismann & Co. could get Moseley into range, but they couldn’t find the end zone. “We hadn’t put in all the shifts and the motion that those teams and Joe Gibbs later became known for,” Moseley said recently. “We needed my field goals.”

The offense wouldn’t click, but Moseley couldn’t miss. In the Skins’ seventh game, on Dec. 19, he kicked an NFL-record 21st consecutive field goal — a wobbly, tipped 42-yarder that rubbed Garo Yepremian’s name out of the league’s record books. (But nothing can erase his name from our hearts! Or from our list of the top Cypriot NFL kickers!) The last-second kick didn’t just set the record; it also gave the Redskins a win over the New York Giants and clinched the team’s first playoff berth since 1976. The Washington Post said it was “one of the most dramatic moments in Redskins history,” a statement that probably said as much about the Redskins’ history to that point as it did about the drama of the moment.

The abbreviated season lent extra gravity to each game, and Moseley kept getting chances to bail out the Skins’ scuffling offense. In the season opener at Philadelphia, he kicked a 48-yarder to tie the game in the fourth quarter and a 26-yarder to win it in overtime. In the team’s first game against St. Louis his four kicks were Washington’s only points in a 12-7 victory. He then nailed the game-winning, playoff-clinching, record-breaking boot against the Giants. The Redskins finished the season with an 8-1 record, and many of the team’s biggest plays involved the foot of its 5-foot-11, 202-pound kicker.

Despite these big moments, Moseley’s season wasn’t totally perfect. The Skins converted 16 of 19 extra points that year, and Moseley missed on his only field goal attempt in the regular-season finale against St. Louis. It didn’t really matter. The Redskins still won that game, 28-0. Still, Moseley had an uncanny knack for getting chances to be a hero at the end of games, and he came through each time.

Shortened season or not, there was no dearth of more traditional MVP candidates that year. Raiders rookie Marcus Allen led the league in rushing touchdowns and yards from scrimmage for a team that also ran out to an 8-1 record. Chargers wideout Wes Chandler led the league with 1,032 yards receiving and nine scores in just eight games. Chandler’s quarterback, Dan Fouts, piled up 320 yards passing per game. He would end up finishing second to Moseley in the AP voting and winning the Pro Football Writers Association and Newspaper Enterprise Association’s versions of the MVP for his season.

Moseley, selected by a national panel of 84 journalists, had a slew of sportswriter fetishes on his side: He had been an ace in the clutch, he had a record-breaking streak, and his team had been successful. “I think once I got nominated it was such an unusual thing that everybody voted for me. When they called me to tell me I had won it, I was shocked beyond words,” Moseley said.

It’s too bad the hardware Moseley brought home was strictly metaphorical. “I never got a trophy!” he said. “I never got anything for being MVP. I got a phone call. The only thing I have to show my kids and grandkids are the articles.” Those grandkids are probably more impressed by his delicious second career as director of franchise sales for Five Guys Burgers and Fries.

After Moseley kicked them into the postseason, the Skins’ offense took off in the playoffs en route to a 27-17 thumping of the Miami Dolphins in Super Bowl XVII. For Moseley, that 1982 season was a beautiful outlier. After making the Pro Bowl only once in 11 seasons before 1982, he suddenly couldn’t miss for eight games. Moseley led the league in scoring with 161 points the following year, but he didn’t become a perennial MVP candidate. He ranks 23rd in career points scored and in 2002 was named one of the 70 Greatest Redskins, but he’s no Hall of Famer.

Sadly for kickers, Moseley’s win didn’t usher in a new era of respect for their ilk, either. It does leave the door open for the possibility that a shorter season might yield some screwball stories of its own. The rise of the punter, maybe? Start printing some “Mike Scifres for MVP!” signs now, just to be on the safe side.