Notes on the Fate of Marcus Lattimore 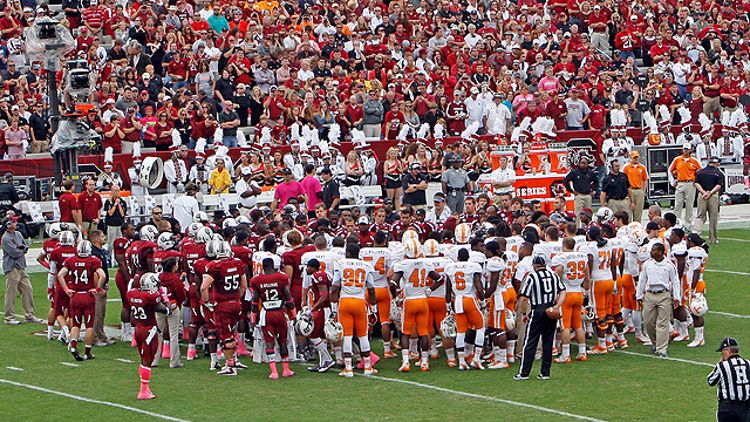 “[Steve] Spurrier visited [Marcus] Lattimore on Sunday and said the junior had a good attitude about his condition,” USA Today reports.

“In life, sometimes you’ve got to move on with whatever hand you’re dealt,” Spurrier said at a press conference.

“The entire college football world will be praying for Marcus Lattimore,” Yahoo! said.

“We prayed for him as a team,” Georgia coach Mark Richt said.

As soon as Lattimore’s right knee was dislocated Saturday — as soon as the TV announcers said, “Avert your eyes if you’re squeamish” — everyone started talking about fate. The hand of footballic fate that smote Willis McGahee and Robert Edwards and Adrian Peterson and Boobie Miles had smitten one of the most likable and talented running backs in the sport.

The fate theory of Lattimore’s injury goes like this: If we just turn our heads when Lattimore’s knee explodes, or when Denard Robinson suffers a nerve injury in his right elbow, or when four of Maryland’s scholarship quarterbacks go down (three of them to ACL tears) and the Terps are forced to start a linebacker at the position, we can have a nice afternoon. This describes me on a lot of my Saturdays, jumping off the couch only occasionally to shake my fist at God.

Another way to look at Lattimore’s injury is to ask, What’s not fate? What’s not the helmet of Eric Gordon arriving at the precise wrong angle from stage left? Here we could talk about the NFL rule that makes a player wait three years after high school before he can turn pro.

Marcus Lattimore was playing college football on Saturday because he had to. In 2010, he was a five-star recruit that Rivals compared to Knowshon Moreno and Cadillac Williams. If there weren’t a rule saying Lattimore had to wait three years, he might, in the manner of a stud high school baseball player, have declared for the 2010 draft. I don’t think Lattimore would have been one of the first picks. But I bet he could have gone at no. 30 overall.

The 30th pick that year was Jahvid Best, a running back from Cal. He went that low because he suffered a terrible concussion during his junior — which is to say, his compulsory third — year of college football. Avert your eyes if you’re squeamish … Here’s Best that season vaulting into the end zone, landing on the back of his head, and at the moment of impact — which made his helmet fly off — sticking his arms out next to his body like a robot that had just powered down. He left the field on a stretcher. The opposing team said a prayer for him.

Had Lattimore gone in that draft spot, he would have gotten $7.1 million guaranteed.

In the 2011 draft, I’d put a still semi-healthy Lattimore at no. 28 overall. That’s where Mark Ingram from Alabama went. Ingram would have gone higher if he’d come out in 2010, when he won the Heisman as a sophomore. But Ingram had to play another year of college football, which meant he had to have his knee scoped and watch his rushing total fall by nearly 800 yards (nearly 40 yards per game).

Had Lattimore gone in that draft spot, he would have had $7.1 million guaranteed.

South Carolina put out a statement Sunday. “Marcus has already begun the process of prehabilitation prior to surgery and to his eventual return to football,” it said. By “football,” South Carolina means college football, for the Gamecocks, at the same non-existent rate of pay.

I’m squeamish, so this is the point at which I avert my eyes.

Filed Under: Bryan Curtis, NFL, South Carolina, The U