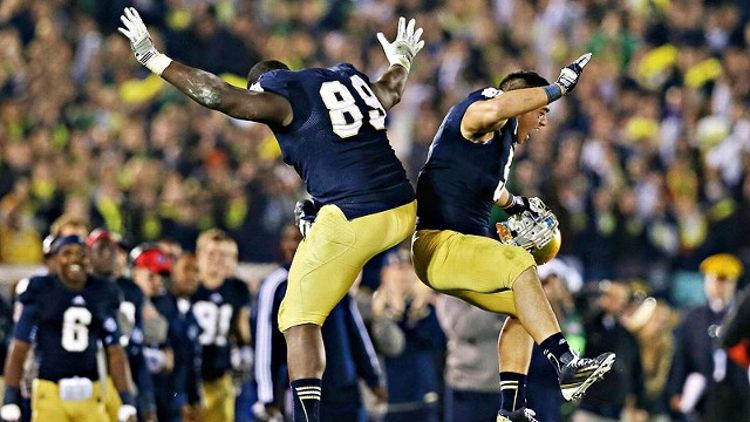 A century before the Saturday evening that will forever be recalled for the painful death of Bill Snyder’s 16 precepts in Waco, and for the gumming up of Phil Knight’s fast-twitch widget-production apparatus in Eugene, and for Les Miles’s epic Lebowski Speech — tell me he doesn’t resemble Jesus Quintana just a little at the 1:39 mark — Notre Dame was just a tiny Catholic college in Indiana with a progressive strategy and a dream of defeating the U.S. Army. This goes back to the summer of 1913, when Irish quarterback Gus Dorais and an end named Knute Rockne worked together as lifeguards in Sandusky, Ohio, practicing a newfangled stratagem on the beach known as “the forward pass.” They unleashed it on the first day of November, against a bigger and stronger West Point squad; the Irish won, 35-13, and an epoch’s worth of treacly film scores were birthed.

“The Westerners flashed the most sensational football that has been seen in the East this year, baffling the Cadets with a style of open play,” wrote the New York Times’s Harry Cross, and this was the opening needed to spur a new type of football, a more wide-open style that may have rescued a violent sport from obsolescence.

So here we are, all these years later, and Notre Dame is atop the college football universe, ranked no. 1 again, and it would be a hell of a story if the Irish, only a few years removed from the Weis-ian doldrums, won the national championship, I admit. But viewed from a historical perspective, I wonder if it really gets us anywhere. Which is why I will be rooting for Notre Dame to lose to the ongoing lax-bro football-deflating freak show at Southern California next Saturday.

Here’s the thing: I like this Irish team more than any I can recall, which isn’t saying much, since I have never liked an Irish team that I can recall. They are overachieving in ways that seem highly emotional and empirically immeasurable. I felt the same way about Kansas State, where Snyder had constructed a powerhouse with wire and string, but I have spent this season quietly pulling for Oregon to reach the National Championship Game, because what Chip Kelly is trying to achieve feels very much, I imagine, like what Charley Dorais and Knute Rockne accomplished a century earlier. Kelly’s offense, and others of a similar ilk, are attempting to drag football feet-first into the future by building off its past, and it is pretty damned fun to watch this war escalate.

When Nick Saban bitched about the challenges of the no-huddle spread a few weeks before his team got buried by Texas A&M, it hearkened back to the time Nixon visited protestors at the Lincoln Memorial. It’s clear that Saban, who is the closest thing we have these days to an iconic old-school coach, is scared to death of what’s coming, and I’m guessing the A&M loss did nothing to change his worldview. This is why I think it’s imperative that, if Alabama plays for another national championship — as now seems more likely than not — they do it against a team like Oregon.

It does seem possible that if Notre Dame loses to USC, Florida State beats Florida, and Alabama finishes off both Auburn and Georgia, the Ducks could slip back into the no. 2 spot. And this is what objective college football observers should want. We need this game in order to confront both our past and our future — to measure our progress, just as we needed the Westerners to baffle those Cadets a century ago. It is only because I appreciate what Notre Dame has done to aid the evolution of college football that I am hoping they blow it.