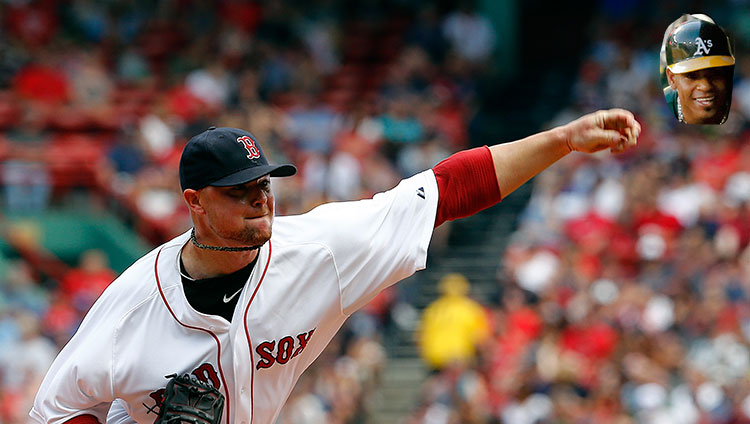 Dan Fierman: Any Red Sox fan who tells you winning three championships hasn’t changed everything is lying. We care less. Almost all of us care less. This is not a bad thing. No one, not even Dan Shaughnessy, would want to go back in time to 2003. (OK, maybe Dan Shaughnessy would.) We’re up $200,000 at the casino, feeling a little frisky, and deciding to play high-stakes pai gow because what the hell? That game has always looked fun. So awesome. Cespedes in right? A roster made up entirely of MLB Muppet Babies? Let’s try it! We’re on a hot streak. What could possibly go wrong?

Bill Simmons: What Dan said. Also, we all know Lester is coming back in five months. Maybe I wouldn’t rent out my wife, my kids or my dogs like this, but I’d definitely rent out my staff ace, considering we’ve won three since 2004. (I’d also rent out anyone at Grantland — other websites, make me an offer!) Oh, and we haven’t had a truly quirky Red Sox star since Manny — you know, someone who keeps our interest on a lazy August day, just because he’s a threat to hit a 450-foot homer or throw somebody out from 310 feet, at all times. Cespedes + Monster = I’m in. He’s gonna love Fenway. And if that’s not enough, I can’t wait to hear all the different ways my father will pronounce his name. I like this trade, and I especially like that we’ve won more titles in the past 10 years than everyone else’s team on this thread combined. I have to go — I am in a juggling class right now learning how to juggle our three World Series DVDs.

Mallory Rubin: Sure, sure, let’s allow the crazy Red Sox fans to go first. I’ll refresh Kevin Gausman’s player page and watch Manny Machado web gems while the Boston folks get it out of their systems. #FeelTheMagic

JackO: Anytime you can trade your staff ace and beloved homegrown hero for a guy who’s got three HR and .573 OPS in the past month, you’ve got to do it. Cespedes does have a great arm, though, which will come in handy, since there will be plenty of guys rounding the bases against your Triple-A-caliber pitching staff. The over/under on Lester donning pinstripes is November 28. Take the under. Tanaka-Lester will be a fantastic one-two punch. I’m excited already. While Billy’s juggling DVDs, I’ll be juggling rings. 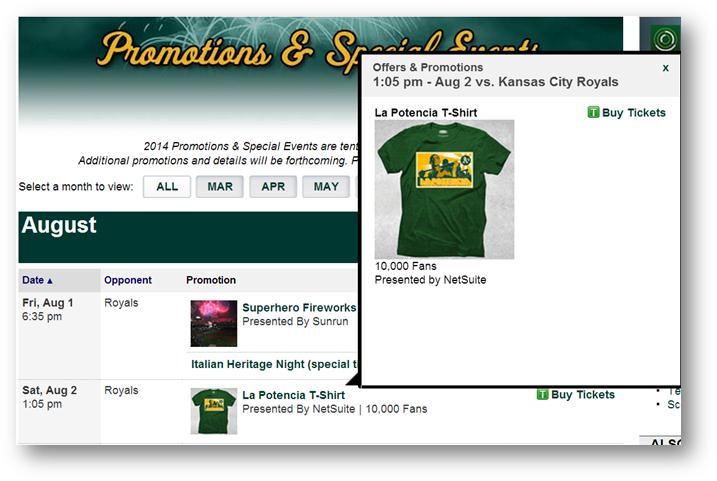 So much for Saturday’s giveaway the A’s had planned. That’s the bad news. The good news is, they will probably make up the lost revenue in World Series tickets sold, as their rotation is rock solid. For Boston, they get a guy who could be Manny-lite in terms of ability and goofiness. He joins Dwight Evans and Tom Brunansky as the best outfield arms the Red Sox have ever had. It’s about 10-1 that he’ll throw someone out at first on a one-hopper to left in Fenway. It’s about 2-1 that he’ll try.

Mark Lisanti: I can’t wait for the first time Yoenis Cespedes fields a ball off the Monster, turns, and, not realizing left field at Fenway is only 100 feet deep, fires the ball out of the stadium, killing a bystander at a T stop on Beacon Street. I’m not sure the geography works out, but this feels spiritually accurate. 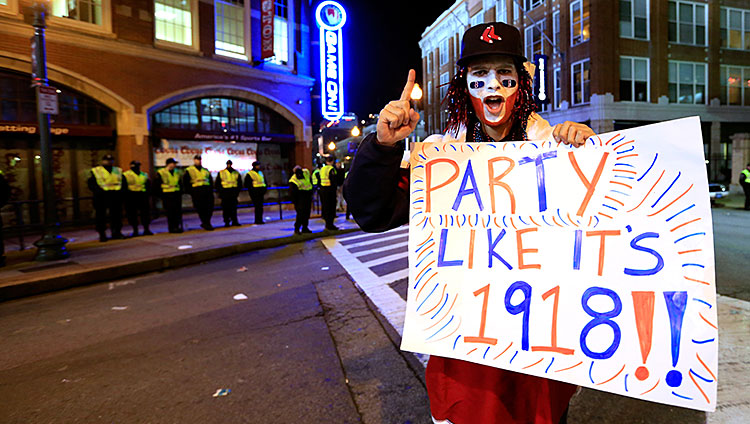 You have to admire Billy Beane. “The Now” is the only remaining undervalued resource. Or maybe the key to the deal is actually Jonny Gomes? Perhaps Beane spent a long, pre-deadline night turning the crank on the Moneyball Apparatus until it spit out a series of images of Sons of Anarchy extras, soot-caked turn-of-the-century coal miners, and a bowl full of loose teddy-bear eyes before resolving into Gomes’s Baseball-Reference.com page? Anybody can trade for a rental like Lester, if they have the stomach for it. It takes a true visionary to make sure he gets the secretly crucial guy nobody would think to ask for because he’s terrible.

Ben Lindbergh: Well, Billy Beane is still ballsy, and he’s still more concerned with wins than appearances. How many teams, and how many general managers, would trade the guy who’s been batting third for them for the past six weeks — and who’s the closest thing they have to a prototypical slugger — with a two-game lead in the loss column and the playoffs looming? And then replace that guy with a combination of Jonny Gomes (who’s hitting .234/.329/.354), Sam Fuld (whom the A’s designated for assignment in April), and Stephen Vogt (who’s having his first productive season at age 29)? Beane wins (albeit only in the regular season, so far) because he’s not afraid to trade anyone, and because he doesn’t think in terms of archetypes like the Middle-of-the-Order Bat. Mix and match Gomes’s bat against lefties, Vogt’s bat against righties, and Fuld’s ability to catch baseballs, and you have 75 percent of Cespedes with 10 percent of the star power. Oh, and you also have one of the best left-handed starters in the sport, who gives you the option to go R-L-R-L in a seven-game series without ever having to hold your nose, cross your fingers, and use someone you wouldn’t want to see in October. Beane is making moves like a man who’s very tired of talking about crapshoots. 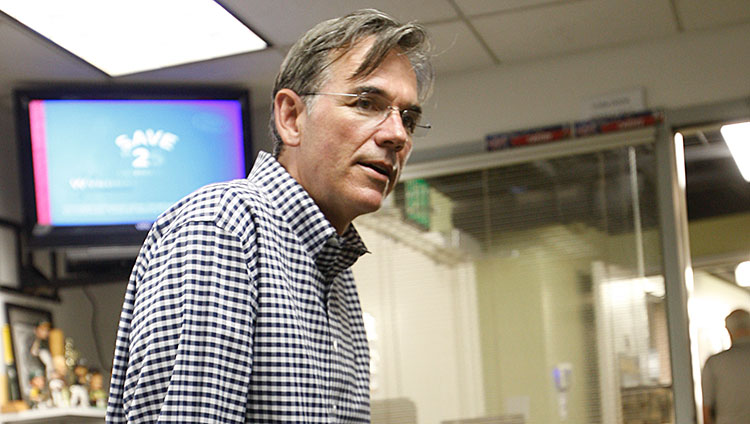 Rany Jazayerli: 1. Everyone’s framing this as a Blockbuster Trade and Oh My God Look At Billy Beane’s Balls, but I really don’t think this deal has a lot of risk for Oakland, certainly nowhere near the risk involved in the Samardzija-Hammel deal. They traded eight months of Yoenis Cespedes for two months of Jon Lester. Do you know what Cespedes’s career OBP is? It’s .318. Since the start of last season, it’s .298. There’s obviously more to him as a player than his OBP, and Fenway is a great park for him, but still: Billy Beane traded a left fielder with a .298 OBP the last two years for the guy who will start Game 1 of the playoffs for him.

2. Given Beane’s propensity to trade any player at any time, I wonder if it wasn’t the plan all along for Beane to put Samardzija back on the market this winter to see if he could recoup a significant fraction of what he gave up to get him. By trading Addison Russell, it was clear the A’s were willing to sacrifice wins in 2016, and beyond, to win now — by trading Cespedes, it’s clear they were even willing to sacrifice wins next season to win a playoff series or three this year. The A’s, as presently constituted, are built to win now, but Beane has shown the willingness and ability to turn his roster over on a dime over and over again, so it wouldn’t surprise me if they used 2015 to retrench a little and replenish the cupboard.

3. I know you Red Sox fans are thrilled that Lester is in Oakland, where there’s zero chance he’ll re-sign, putting him back on the market for the Red Sox front office to get him back. But you know who I bet is equally thrilled? The old Red Sox front office, currently employed at Wrigley Field. Maybe I’m wish-casting here, but I’m convinced the Cubs are going to make a major play for high-end free-agent pitching this winter, and this guarantees that Lester — along with Max Scherzer, James Shields, and others — will be out there. Lester also fits their M.O. as an American League guy who will get a boost from facing off against inferior NL competition. He arrived in Boston too late to end one curse, but saw how it affected the legacy of those players who did end it; it wouldn’t surprise me one bit if the appeal of ending another curse sways his decision this winter.

Sean Fennessey: In November, director Bennett Miller’s new film Foxcatcher arrives in theaters. It’s a story of USA Olympic wrestling and families and how the quest for winning can drive you mad. By all accounts, it’s a serious thing pitched squarely at the awards circuit. Miller’s been here before. His last movie was the 2011 adaptation of Moneyball. It got walloped at the Oscars by The Artist, which is a movie that actually happened. Miller — who also made the Oscar-nominated Capote — is taking nothing to chance this fall. He reminds me of someone.

I wonder if Miller still talks with Billy Beane. Like, late at night. About being sick of inching toward the finish line, only to have their heads chopped off. About exploiting the inefficiencies, for a spell. About never being good enough, just good. About saying, “Fuck it.” They might have more to talk about in November.

“My shit doesn’t work in the playoffs, they said.” Beane shoves a stack of books off the table and shouts at the sky like a wounded raven.

“I’ll show them shit working in the playoffs. I’ll make it work.”

Beane turns and grabs the phone. The effort of picking up the phone causes him to lose his balance. “FORST!” he yells into the receiver as he steadies himself. “Get me a pitcher … yeah, Samardzija. Yeah! Get him! … I don’t care, just get him!”

Beane slams the phone down, then immediately picks it up and dials again. He throws a glass against the wall, breaking it into more pieces than it took the Mariners to acquire Erik Bedard.

Beane rips the phone cord out of the wall and throws the entire assembly through the window.

“My shit doesn’t work in the playoffs, they said.” Beane takes another slug of whiskey. “I’ll show them what happens when I have all the pitchers.”

Beane looks out into the night. Oil fields burn in the distance as sirens drown out the noise of birds and crickets.