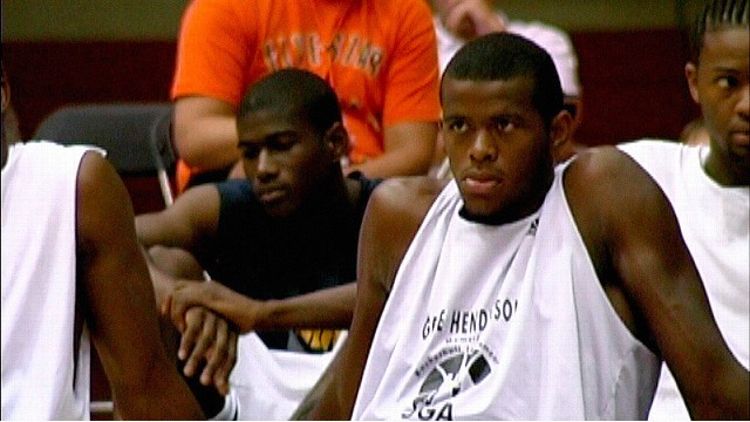 When we call the New York Times the “paper of record,” we’re usually referring to its coverage of elections and international affairs, or ambitious Pulitzer bait like the “How Race Is Lived in America” series. In recent years, however, the Times “Sports” section has also marked its territory as a go-to publication for reporting on shattered hoop dreams, especially “Where is he now?” stories about gifted amateur players whose NBA futures have gone kaput thanks to bad luck and catastrophic decision-making. The photographs that accompanied these articles — Victor Page in his eye patch, Jonathan Hargett in prison blues — felt like they tapped into the vein of basketball heartbreak, and no image affected me quite like the one that ran with Harvey Araton’s 2012 profile of Lenny Cooke.

Unlike Page, Cooke hadn’t been shot, and unlike Hargett, he wasn’t incarcerated, so in very plain terms, things could have worked out worse for Cooke. But the sight of Cooke, 6-foot-6 and 300 pounds, sitting with his elbows on his knees and rolls of flesh spilling out of his black tank top, shook me in a way the others didn’t. His plaintive gaze was searching for something — maybe his past, maybe his future — and coming up empty. It wasn’t just that Cooke, who went from being the no. 1–ranked high school player in the country to being passed over in both rounds of the 2002 NBA draft, had lost the muscle tone in a physique that had once allowed him to dominate high school competition as a man among boys. Also missing from Cooke was that New York– and Brooklyn-bred look of stubborn, unrelenting confidence, that sense that the world was his to take, that he didn’t even know how to feel fear. Instead, his expression looked heavy and forlorn, like he was one setback away from losing all hope.

I first caught wind of Cooke’s fate in early 2006, in a metro Manila neighborhood called Barangay Pag-Asa, or “hope,” of all places. I was living in the Philippines and researching an article about how American import players were treated in the local professional league. Sitting in the kitchen of the Philippine Basketball Association’s head stat-keeper, I leafed through his binders of box scores and recorded the imports while his mother boiled fish for dinner. I jotted down names like Ace Custis, Rodrick Rhodes, and Shea Seals until I reached a stat sheet from a 2003 game and stopped dead in my tracks.

“Yes, he was the import of Purefoods,” the stat-keeper said. “Great scorer until he had an injury to his Achilles tendon.”

At the time, that seemed to be the missing piece of the Lenny Cooke story. He had been one of the most hyped players in the history of overhyped New York basketball phenoms. Then he became the biggest cautionary tale in NBA draft history, a case study in how shady agent deals and attitude issues can derail a promising career before it ever begins. Next, he was a fringe pro, hanging tough in NBA summer league stints and succeeding as an import in the international game, until a 2004 car crash and subsequent injuries forced him out of competitive basketball.

Or so I thought. Lenny Cooke, a documentary that premiered this month at the Tribeca Film Festival, takes stock of the latest, least eventful period of Cooke’s career and turns it into one of the most raw and unguarded portraits of a modern athlete I’ve ever seen. The beauty and tragedy of New York basketball — “The City Game,” as Pete Axthelm dubbed it in his 1970 nonfiction classic — has been extolled in so many books, from Axthelm’s to Rick Telander’s Heaven Is a Playground to Darcy Frey’s The Last Shot, but it has yet to be presented on film (well, unless you count Above the Rim). Lenny Cooke feels like it could be New York’s Hoop Dreams.

The filmmakers followed Cooke at two very different points in his life, and the documentary is presented in two chapters — before and after his fall from the top. The first half of the movie covers 2001 and 2002 and follows Cooke through AAU tournaments, summer showcase camps like ABCD and Five Star, and his senior year of high school. The story dead-ends after Cooke goes undrafted, with a few scenes from games he played in the USBL, the CBA, and in the Philippines used to fill the temporal gap until Lenny Cooke picks up again in 2012, when Cooke is 300 pounds; jobless; living in Emporia, Virginia; and about to turn 30. (Two disclosures: I helped the filmmakers obtain footage from Cooke’s PBA career, and this documentary premiered in a series of sports documentaries at Tribeca that was sponsored by ESPN.)

The film captures scenes from Cooke’s teenage and adult years that are more honest and unpolished than anything today’s sports fans are accustomed to seeing from high-profile athletes. When he was still in high school, some of Cooke’s actions make him look like an amalgam of everything that was wrong with the AAU basketball circuit in the early 2000s. At Five Star camp, he fakes his way through push-ups, arrives late for morning drills, and then tells his coach that a punishment of running suicides at 6:30 the next morning will not work for him — 8 a.m. is better. Cooke describes taking money and shoes to play for various teams in different tournaments. At an AAU event in Las Vegas, Cooke appears to be more interested in chasing tail than proving himself on the court. Because when Slam and the Times and all the recruiting services say you’re the best player in the United States, what’s there to prove?

These scenes, disheartening as they may be, don’t come as a great surprise in the film. The audience knows that Cooke’s comeuppance is looming. And because uncoachable prima donnas, sleazy agents, and illicit gifts have become such a regular part of the narrative of big-time high school basketball, the footage of Cooke’s mistakes feels less shocking than the images in Lenny Cooke of the star kid living life as a normal teenager. Early in the film, we see Cooke and his boys lounging around a living room, watching the 2001 NBA draft and devouring McDonald’s Extra Value Meals while arguing over who was the best player in the NBA: Kobe Bryant, Tracy McGrady, or Allen Iverson. Inside the theater, it felt like half the audience was thinking, Damn, I had the same exact debate that night! The brief instances that allow us to feel something in common with Cooke make it even more gut-wrenching to watch him wade deeper and deeper into career quicksand.

There’s a scene at the heart of Lenny Cooke that stands out not for its emotional impact or cinematic beauty, but as a basketball artifact of great value. Lenny Cooke contains extended and largely unseen footage from the 2001 Adidas ABCD summer camp, where Cooke went head-to-head with LeBron James and Carmelo Anthony. It’s easy to imagine basketball obsessives watching and rewatching those scenes, searching for seeds of greatness in LeBron’s passes and Carmelo’s face-up game. In LeBron’s case, the search won’t be difficult. In the camp’s climactic showdown, LeBron outscored Cooke 24-9, sunk a game-winning 3-pointer at the buzzer, and displayed a floor game so mature that aside from 40 pounds of muscle and a full head of hair, I almost felt like I was watching the same LeBron who will be playing in Game 1 of the Eastern Conference semifinals in the near future. In comparison, Cooke looked very much the amateur, a kid who was still fixated on crossing his man over 15 times before attempting off-balance jumpers. That game was the first time anyone beat Cooke in a significant matchup, and the loss ended up symbolizing the end of his career. After ABCD, Cooke dropped from first to third in the national rankings, and a year later he had tumbled all the way out of the draft.

Later in the film, once the cameras have reunited with Cooke in 2012, he admits begrudgingly that his son is now a LeBron James fan. It’s rare and moving to see an elite athlete, even one who never reached his potential, display his vulnerabilities. Cooke ends up spending his 30th birthday like many of us do — anonymously, except for a few friends and family members. There is a basketball-shaped cake; some drunken serenades; and tears welling in his eyes at some point after midnight. That’s normal for a lot of us, but Lenny Cooke was never supposed to be normal; he was supposed to be great.

Near the end of the film, Cooke, at home in Virginia, sums up his career. “I sit back and think about all the shit I’ve been through and I’ve done,” he says. “And at the end of the day, I’m right back where I started. So I didn’t lose nothing and I didn’t gain nothing.” It’s honest, and when you think about how far Cooke’s talent could have taken him, it’s devastating, but by the end of the film I felt like I had become a bigger fan of Lenny Cooke than I’ll ever be of Carmelo Anthony or LeBron James.

So Who Else on Borussia Dortmund Is Going to Get Bought?