Larry Ellison and the Remaking of the America’s Cup 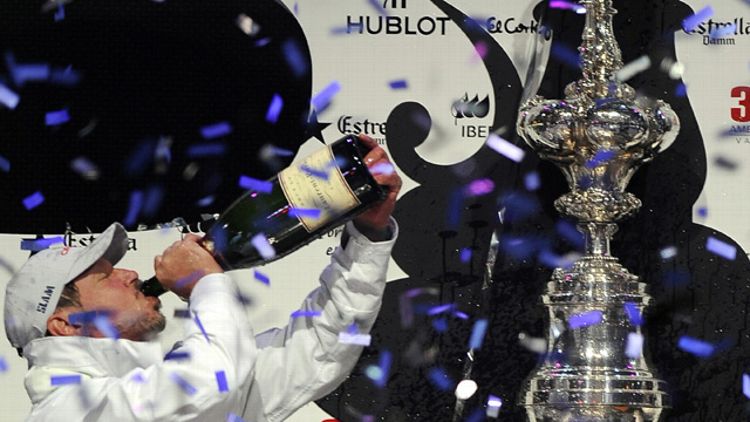 During the NBA lockout last fall, Bill Simmons and Jay Kang fantasized about the players breaking off and creating a rebel basketball league. Their proposed name for the alternate universe: The Oracle. After all, as Kang wrote, “we need a commissioner/bankroller [and] Larry Ellison has to be the man to spearhead this league.” Among Ellison’s bona fides as the ultimate (slightly unhinged) sports sugar daddy? “He … spent $200 million to win an effing yachting competition.”

At least. The Sports Business Journal actually estimated the cost of Ellison’s 2010 America’s Cup victory to be more like twice that sum; perhaps they were tacking on all the legal fees Ellison racked up along the way. And the spending hasn’t stopped since. With the America’s Cup, which for decades had never left Newport, set to take place in U.S. waters for the first time since San Diego hosted back in 1995, Ellison has doubled down on his mission. He no longer just wants to win the effing yachting competition — he wants the effing yachting competition to win everyone over. Even those who may not know their Sunfish from their starboard.

When you win the America’s Cup, you get to decide pretty much all the details about how, where, and when you get to defend the trophy. It’s a little bit like H.O.R.S.E. crossed with Capture the Flag, a soapbox derby, being president in a game of asshole, and lots of saltwater. After Ellison won the 2010 America’s Cup, hosted in Valencia, Spain, he wasn’t just interested in steering the ship, so to speak: Nope, he made like a nautical engineer and decided to redesign the whole thing.

He announced San Francisco as the host venue for 2013, but didn’t stop there. He also announced the formation of a new organizing body and introduced a regatta circuit that would run during the two years leading up to the main event. Called the America’s Cup World Series, it would determine challenger seedings next summer and, presumably, help attract sponsorships and publicity.

Ellison also made sweeping changes to the boats themselves, decreeing that the 2013 race was to be sailed in AC72s, a new class of yacht with a 72-foot double-hulled frame and wing-sail technology. The wholesale changes were an attempt by the technology magnate to, as Oracle Racing CEO Russell Coutts told Wired‘s Adam Fisher last year, “meet the expectations of the Facebook generation, not the Flintstone generation.”

Ellison’s vision is one in which it isn’t just the Judge Smails of the world watching, but the Danny Noonans too. To that end, he’s trying to make it faster, flashier — and crashier. If all that sounds like code for X-Gamesier, it might not be too far off. The latest World Series event is currently being held in the San Francisco Bay until Sunday, a preview of sorts for next year’s America’s Cup, and Oracle Team USA had a guest sailor riding with them on their boat during yesterday’s races: extreme snowboarder Travis Rice. Both Rice and the Oracle team are sponsored by Red Bull.

For the type of people who use the word “summer” as a verb, the America’s Cup conjures up images of the old single-hulled 12-meter vessels, like 1977’s Ted Turner–helmed Courageous, which can still be seen gliding around the harbor in Newport today. Compared to those iconic ships, which look like they belong shrunken inside thick glass bottles atop wooden tables in seaside retreats, the new generation of America’s Cup catamarans seems like it would feel more at home on the shelves of a Sharper Image — batteries not included.

While the change can seem vulgar — the Wired piece called the multi-hulled designs “crass-looking” and noted that “for traditionalists, it was downright offensive” — it’s also very much in keeping with the expensive and eccentric spirit of one-upmanship that has defined the America’s Cup since its earliest years. The event’s history is one rich with the kind of technological innovations, jealously guarded secrets, and diplomatic squabbling that rear their heads in any proper arms race, from the Cold War to Schick-Gillette blade escalation. An 1895 New York Times article about an innovative new boat with a steel mast warned that “exact information [about the boat] from either side of the Atlantic can only be compared to rivals in a game of cards showing their trumps to the other side.”

One hundred years later, the paranoid crews who had taken to literally shrouding their boats in secrecy (think giant loincloths and you’re not too far off) finally agreed to a truce, and in the words of one 1995 article, the five America’s Cup finalists ceremonially “lifted the skirts” hiding their boats’ variously shaped appendages.

“Words such as flippers, beaver tails and squash bulbs were used,” according to the piece, “to describe shapes that took engineers and scientists from groups as diverse as Boeing Aircraft, General Motors, Lockheed Space Systems, Microsoft and Cray Research a year or more to develop.”

Next year’s designs will be pretty uniform, so just two words will probably do: [Expletive] fast.

The AC72s, with their enormous (and rigid) “wings” in place of the old soft fabric sails, are so powerful and efficient that they can reach speeds greater than the wind they’re harnessing. The Italian former Olympic sailor Luca Devoti called the boat “a triple leap of faith” and explained that “you have to change completely your way of thinking: the boat is sailing from the moment the wing comes out of the shed because the wing can fly away at any moment.”

In the World Series events to date, the sailors — many of whom had little or no experience commanding these lightning-fast beasts — have all been competing in scaled-down AC45 boats . Even still, there have been signs of carnage: Emirates Team New Zealand and China Team were among those who already capsized earlier this week during practice, and last year, in the gusty San Francisco Bay, Oracle’s Coutts pitch-poled his AC45 in spectacular fashion.

If the AC45s are a handful, one can only imagine how the AC72 fleet will work out next year. The new catamarans are massive, they are behemoths, they are a full 10 meters longer than the Dennis Connor–era Newport jewels. They are “slightly wild, almost feral,” wrote the New Zealand Herald’s Paul Lewis, “the dip not just of a pioneering toe into previously unexplored waters but whole legs, torso, and arms.” They are extreme. They are dangerous.

In other words, they make for kick-ass TV.

Amid all the big changes taking place in preparation for 2013, one of the most important may be upgrades not to the boats themselves but to the broadcasting technology that will showcase them. At this year’s Sloan Sports Analytics Conference hosted by MIT’s business school, one of the most popular presentations (“The America’s Cup: Augmenting the Visual Experience of Sport”) was by Stan Honey, the head of Sportvision, a company you may know from such household items as the yellow first-down line in NFL broadcasts, baseball’s K-Zone, or the long-lost glowing puck from the NHL on Fox.

Sportvision’s latest effort? LiveLine, a system of graphic overlays that helps turn a jumble of sailboats into something more orderly, like a chessboard. (That is, if a chessboard showed wind direction, currents, and the distance of the narrowing gap between two pieces.) In April, Sportvision won an Emmy award for LiveLine’s “extraordinary technological innovation that enhances the broadcast for viewers.”

The system is so precise and user-friendly that it is actually now being used by the race committee to help police penalties and out-of-bounds. It’s as if the NFL abandoned the chains altogether. As Wired’s Fisher explains in his must-read exploration of the new system, LiveLine is more than “a software package of crowd-pleasing bells and whistles … [it’s] an operating system for an entire sport.”

What’s more, not only is the San Francisco Bay a picturesque venue — watching the World Series races Thursday, the background images of painted houses stacked up on the city hillsides were almost enough to make me run out and buy an ill-advised 3-D TV — the routes of the races themselves are now designed to maximize drama (“drama” usually meaning “collisions”) and allow for more lead changes. The result, Ellison hopes, will be a TV product so lush with color, movement, and speed (and boosted by the priceless audio of the crews yelling, strategizing, and cursing like the sailors they are) that even the casual viewer will want to go along for the ride. (If you’re interested, NBC will televise the finals on Sunday, while Friday and Saturday’s races can be seen on Comcast Sports California or streamed live online here.)

Not everything is (sorry) smooth sailing (I SAID SORRY) for Ellison and the America’s Cup, however. Initial plans to revitalize several of San Francisco’s docks never came to fruition due to clashes with the city. The America’s Cup Event Authority created by Ellison laid off 28 people in March amid the downsizing of the scope of the planned 2013 event. While the World Series event held this week and weekend has a full fleet of boats sailing, only three or four of them will compete for the America’s Cup next year — half the typical yield — due in large part to the cost of having to build an AC72 boat that could be destroyed with one gust of wind.

“There are three billionaire teams and us,” Grant Dalton, the New Zealand coach, told Breeze magazine. “The AC72s are too big and too expensive. These are the wrong boats. It might have been a great idea, but it is a folly really.” A spokesman for Louis Vuitton, one of the Cup’s biggest sponsors, recently had this burn for Ellison: “When we understood there would be only three or four boats, I thought Larry would call a few friends,” Bruno Troublé passive-aggressively told the Mercury News, calling the situation “a pity.”

Ellison may have made himself into a markedly unpopular guy in many nautical circles, but I’m kind of rooting for his experiment to work out. The America’s Cup, much like the sport of sailing itself, has always been about rich men fiddling around with their toys; as Fisher’s Wired article points out, the old adage about sailboats is they’re “a hole in the water into which one throws money.”

I’m partial to the more precise try-it-at-home variation on that theme I’ve always heard: You can buy a sailboat, or you can stay home and stand in a cold shower ripping up hundred-dollar bills. In Ellison’s case, though, I don’t think there’s a shower in the world that could produce enough pressure.