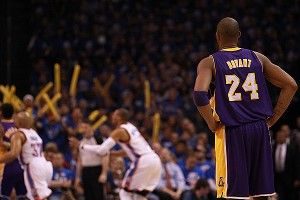 Despite Kobe Bryant’s 42 points, the Oklahoma City Thunder beat the Los Angeles Lakers in Game 5 of their series on Monday night, ending the Lakers’ season and setting up a matchup with the San Antonio Spurs in the Western Conference Finals. If you didn’t catch Monday’s game, here’s five things you missed.

Lakers fans love scapegoats
At some point during the fourth quarter of Monday night’s game, Mike Brown, Mitch Kupchak, Lamar Odom, Brian Shaw, Phil Jackson, Derek Fisher, Pau Gasol, and Andrew Bynum were all trending on Twitter, primarily because Lakers fans were busy passing around the blame. It was no surprise that a guy by the name of Kobe Bryant was noticeably absent from their collective list of scapegoats.

Now, I’ll be the first to admit that Kobe has done so much for the Lakers over the course of his career that he’s earned himself a free pass for the rest of his life. And I know that he played brilliantly in Game 5 and was so explosive from start to finish that he was a baby Afro and a no. 8 jersey away from being Young Kobe. But if you disregard the past and the “Without Kobe, the Lakers wouldn’t even be in this position in the first place” argument, it’s hard not to think that Kobe is partially to blame because the Lakers would likely have a 3-2 series lead over the Thunder right now if not for his awful shot selection at the end of Games 3 and 4. Somehow this is being completely overlooked by a majority of Lakers fans, though, who instead want to blame everyone affiliated with the Lakers except for Kobe. (I guess they also want to blame David Stern for vetoing the Chris Paul trade, which is actually a valid complaint.) Anyway, I know this is a crazy thought, but humor me for a second, Lakers fans: Maybe the blame for the Lakers getting bounced in the second round shouldn’t fall on any one player or coach because maybe, you know, Oklahoma City is just a really good team.

The Thunder look like they would be a blast to hang out with
Except for maybe Derrick Rose, I can’t think of a single NBA superstar who seems to be more down-to-earth than Kevin Durant. He looks like the kind of guy who, after a long day of slaying fools on the basketball court, drives his van back to his place, grabs a box of Capri Suns out of his fridge, and sucks them down while watching that day’s episode of Jeopardy! on his DVR. Meanwhile, James Harden’s beard is all I need to see to know that he likes to party, Nick Collison and Cole Aldrich strike me as the type of guys who spend their summers on a lake somewhere with nothing but a fishing pole, a case of beer, and a boom box blaring George Strait’s greatest hits, and even though at times he has one of the most punchable faces in the NBA, his postgame outfits alone tell me that Russell Westbrook doesn’t take himself too seriously. In fact, the only foreseeable drawbacks to hanging out with the Thunder are that Kendrick Perkins looks like he always has Icy Hot on his balls because he’s so grumpy all the time, and it wouldn’t surprise me if Derek Fisher took his role as the elder statesmen way too seriously and was a huge buzzkill because of it.

Phil Jackson critics should now cease to exist
Excluding his pinky ring and the fact that he rocked a soul patch for a considerable amount of time, the big thing that critics of Phil Jackson like to point to is the fact that each of his 11 NBA titles came with Michael Jordan or Kobe Bryant on his team. Sure, having the two best players in the past 20 years on the roster makes things much easier than coaching a bunch of nobodies, but the misconception seems to be that all Jackson had to do with each of his title teams is stay out of the way and let the immensely talented players handle everything.

Well, thanks to Mike Brown, any doubt about whether Jackson made a difference or was just lucky to ride the coattails of some of the game’s all-time greats is now completely gone. That’s because, similar to Jackson, Brown has spent seven of the last eight years coaching LeBron James or Bryant, who are considered to be two of the best players ever and are certainly the two best players of this era. But unlike Jackson (who won five titles in his first seven seasons as a head coach), Brown has historically underachieved and has won as many NBA Finals games as I have. This isn’t necessarily meant to be a criticism of Brown (cue Lakers fans asking why not), but is instead meant to illustrate that, believe it or not, coaching an NBA team is a pretty difficult job no matter how great your players are.

Capital One and Best Buy won’t let us forget about Alec Baldwin’s plane incident
Alec Baldwin was kicked off a plane for playing Words With Friends months ago, yet somehow there are still two commercials being aired right now that reference the incident. I get why it’s an amusing gag, but at the same time I can’t help but think that if a dumb celebrity story like this is still being referenced months later, next year’s Super Bowl commercials are going to be packed with references to John Travolta’s alleged spa misadventures.

Best-case scenario: Doritos does an ad where a Travolta look-alike is face-down on a table getting a back massage from a man. As the masseuse steps away to do something (let’s say he’s loading a new Enya CD), the Travolta look-alike slowly reaches his arm out of frame. The camera cuts to the masseuse as he turns around from the CD player, and then zooms in on the look of horror and disgust he has on his face immediately after turning around, insinuating that he’s getting his goods fondled by the Travolta character. It then cuts back to the Travolta look-alike, who has orange powder all over his face and his hand in a bag of Doritos that had been placed on a nearby table. The Travolta character freezes after he realizes he’s been caught making a mess, and the commercial ends with the Doritos logo coming onto the screen with some stupid phrase like “Deliciously Irresistible.”