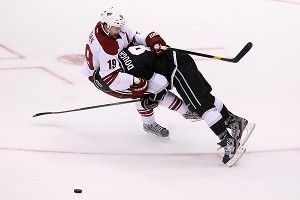 It’s been a tough couple of years for 22-year-old Drew Doughty. The Los Angeles Kings defenseman recorded 59 points as an NHL sophomore in 2009-10, establishing himself as a premiere offensive defenseman. But with just 40 points in his 2010-11 campaign and 36 this year, he hasn’t been able to match his initial scoring pace. It’s a failure that juxtaposes badly with his eight-year, $56 million contract, inked a week before the start of this season.

Nobody’s thinking about Doughty’s faults now, though. He’s easily been the top defenseman on the top team in these NHL playoffs.

Of the Kings’ three defense pairings, Doughty and regular partner Rob Scuderi have far and away the heaviest defensive burden on the team. They are coach Darryl Sutter’s choice to shadow the other team’s offensive stars, a job they’ve done superbly in the postseason.

They also get more work in their own end than either of the other two pairings. Sutter occasionally unites stay-at-home defenders Willie Mitchell and Matt Greene for defensive zone shifts, but even so, neither player carries the same load that Doughty does. Through Game 3 of the Western Conference finals, Doughty had been on the ice for 84 defensive zone draws (59.3 percent of his non-neutral zone face-offs coming in his own zone), while Mitchell (54 total, 49.5 percent) and Greene (33 total, 37.1 percent) have seen far less own-zone time both overall and as a percentage of their total shifts.

Doughty doesn’t just play quality minutes, he plays a lot of them. In this year’s playoffs, his ice time hasn’t dipped below 23 minutes in a single game. He’s integral to the Kings’ game plan in every situation, leading the team in ice time at even strength and on the power play, and still managing to average around 2:30 per night on the penalty kill.

In the latter situation, Doughty’s Kings have been especially good. Overall, the team has killed off 92.2 percent of the penalties it has faced. More than that, the Kings have actually matched the opposition goal-for-goal while shorthanded, scoring four times while surrendering four goals against. With Doughty on the ice, the Kings have scored three times while down a man; even better, they haven’t allowed a single goal.

The only blemish on Doughty’s playoff résumé this year is the struggling Kings power play. At just a 8.6 percent conversion rate, it’s really the only part of the team’s game that hasn’t delivered, and Doughty’s an integral part of the unit. Partly, the power play struggles have simply been a case of shots not going in — the Kings’ shooting efficiency 5-on-4 is just 3.8 percent, but they aren’t getting enough shots, either. Averaging just under 45 shots per 60 minutes of 5-on-4 time would have ranked the Kings 26th in the league in the regular season; it’s just not good enough.

In the balance, that’s a fairly minor flaw. Boston won the Cup last year with a power play nearly as impotent. And if the Kings win this year, a big part of the reason will be Doughty.