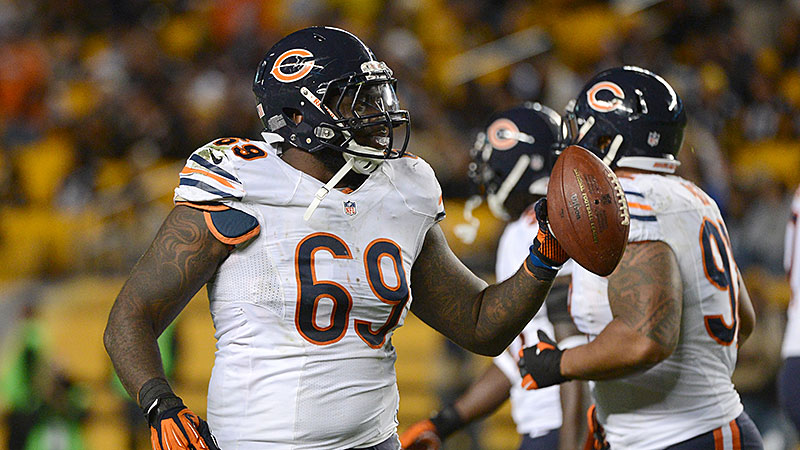 It’s that time of year again. The NFL flea market is open for business, and this year, it’s open for a lot of business. Rather than list off the 50 or so players slated to hit the market, we decided to try to give a little insight into a few of the bigger names available this spring. As you yell at Twitter and friends about who your team needs, a little familiarity with the options can’t hurt.

Griffen is one of the lesser-known commodities hanging around the top of this year’s class. Drafted in the fourth round in 2010, he’s spent his four years in the league as a part-time player on a defense with a pair of entrenched defensive ends. Jared Allen and Brian Robison take most of the snaps outside, so many of Griffen’s opportunities have come as an inside pass-rusher. That, combined with his lack of overall work, makes his sack totals (eight in 2012 and 5.5 in 2013) intriguing.

Before the draft, there were plenty who thought Griffen had the talent to be a first-round pick coming out of USC, but off-the-field problems and effort concerns dropped him all the way to the fourth round. The same strengths that earned Griffen that first-round status are what make him an enticing option as he hits the open market. He’s extremely quick, gets off the ball well, and has great closing speed to the quarterback. They’re all traits that make him better suited to be an edge rusher working in space than an interior player working in the close quarters he’s seen in Minnesota.

There are a couple of different arguments about extrapolating limited-snap pass-rushing numbers for part-time players. One is that a player who’s on the field only in passing situations will be fresher. Another is that pass rushing is a continuous, strategy-based affair that plays out over an entire game — a series of moves and countermoves dependent on sustained exposure to the guy across from you.

It doesn’t seem like a coincidence, then, that Griffen’s best game as a pass rusher came in his only start at defensive end in the past two seasons — against the Texans in 2012. The combination of settling into the rhythms of the game and the chance to play four full quarters at his best position led to a handful of hits and hurries and generally making life really uncomfortable for Matt Schaub. There’s nothing complex about the play above. It’s just an edge rusher getting off the ball, naturally ripping and dipping to the quarterback.

There’s something enjoyable about being pleasantly surprised by a player you haven’t seen much, and watching Griffen was definitely one of those moments. Along with that get-off against the Texans, this spin move against the Bengals was my favorite play of the bunch. Pulling off a spin while lined up as a defensive tackle isn’t easy. It’s a move that typically requires a lot of space — space unavailable when working inside. Griffen makes it work, though, and it’s just another example of how much he’d be served by a full-time move outside.

As a Bears fan, I’m familiar with Melton’s work. I listed his 2012 stats above because Melton missed the final 13 games of last season with a torn ACL. Missing nearly an entire season is tough for any player, but it’s especially rough for someone playing on a one-year deal — even if that deal is the fairly lucrative franchise tag.

Melton earned his tag by putting together a very impressive, Pro Bowl–worthy season in 2012. Six sacks is a good number for a defensive tackle, but even that isn’t enough in describing how consistently disruptive Melton was for the league’s best defense. The Bears’ entire defense was a mess this year, but Melton was the player they missed the most.

The defining aspect of Melton’s game is penetration. In his first year at Texas, Melton was a 270-pound running back. He’s a little bigger now (about 295), but quickness is still his greatest asset. When he’s lined up as a 3-technique tackle in passing situations, it can be a nightmare for opposing guards.

This play is from the Bears’ Monday-night win over the Cowboys in 2012. Melton doesn’t actually get credited with a sack here (it was ruled a pass attempt), but the result is the same. As defensive end Israel Idonije moves outside, Melton has plenty of room to work with against the right guard, who doesn’t have much of a chance. With one simple club and a late rip, Melton is into the backfield.

That position and approach is where Melton does his best pass rushing, but his ability to get deep into the backfield also shows up against the run. Sometimes that means getting across a guard’s face and dragging down a ball carrier running to the opposite side. Other times, it’s plays like this one — simply blowing past an offensive lineman and burying a ball carrier four yards behind the line of scrimmage.

His ability to spend entire games in opposing backfields is what will get Melton paid, but it’s also where he gets in trouble. It produces plenty of spectacular plays, but it also sacrifices the gap integrity many defenses are built on. It’s possible for defensive tackles to get too far up the field, which can leave gaping holes after a runner cuts back.

This happens to Melton pretty often, but it’s probably not enough to deter any team tempted by the barrage of negative plays he forces. It will definitely be less than he would have gotten a year ago, but even with his occasionally unsound play against the run, the ACL injury, and his recent legal trouble (he was arrested for assault and public intoxication in December), Melton is likely to get paid.

During the preseason last year, I drove to Napa, California, for Raiders training camp. I was going to speak with Veldheer, Oakland’s fourth-year left tackle and someone I wanted to include in a series I was working on about the league’s 22 most underappreciated players.

Veldheer’s situation is the perfect one for a good player to be working in relative anonymity. He was drafted in the third round out of Hillsdale College, a Division II school in his home state of Michigan. Playing offensive line as an unheralded prospect on a bad team usually doesn’t come with much recognition, but by the halfway point of his rookie year, Veldheer was the Raiders’ starting left tackle. By the end of the 2012 season, he was one of the more consistent ones in the entire league.

I didn’t end up including Veldheer among the 22 players, because before I could, he was lost for most of last season to a torn triceps. I took away a few things from our conversation, though. Veldheer is massive, even by offensive line standards. He’s every bit of the 6-foot-8 he’s listed as (seriously, he’s a massive human). He also seems to have both a grasp of where he needs to get better and a real desire to do it. Raiders offensive line coach Tony Sparano spent a majority of the practice criticizing his best player, and when I asked Veldheer about it afterward, he said it was exactly what he wanted.

The main area of improvement, to which both Sparano and Veldheer pointed, is in Veldheer’s ability to create leverage in the run game despite that 6-foot-8 frame. It isn’t easy for a player that tall to play under his pads and get enough bend to turn his size into power.

Where Veldheer’s length is an advantage is as a pass-blocker. He has good feet for a player his size, but even if he didn’t, his wingspan and the amount of space he occupies would make life difficult for most pass-rushers. This is a play from Week 16 in 2012, with Veldheer facing off against Greg Hardy, who was a consensus top-two player from this year’s free-agent class before signing his franchise tender. The fluidity Veldheer shows as a pass-blocker is evident here, as it was throughout the entire game. Hardy didn’t get a hand on a Raiders quarterback for four quarters, a rarity for him in the past two seasons.

At just 26, Veldheer is a young, proven left tackle who’s only getting better. Missing most of the season (and not playing his best when he did return) hurts his value, but it’s rare that a left tackle at this point in his career is allowed to hit the open market. The Raiders have a ridiculous amount of cap space, and it would be a surprise to see them let Veldheer leave.

Every year, free agency is a reminder that players are only worth what someone is willing to pay. The market doesn’t always behave the way it’s predicted to, and occasionally, that leads to deals like the one Michael Bennett got last offseason. Bennett was probably the best defensive end available, but he ended up in Seattle on a one-year, prove-it deal. Anyone who watched the playoffs knows that this time around, that’s not likely to happen again.

Schwartz isn’t quite on that level — he wasn’t a full-time starter in 2012, for one — but he was another player for whom the market was surprisingly unfavorable a year ago. Schwartz was a very good guard for the Panthers in 2010, starting 16 games and playing well in most of them, but after he missed all of 2011 with a hip injury, there wasn’t a lot of long-term interest going into the 2012 season. Schwartz elected to sign a one-year deal with the Vikings, where again, he was effective in limited time. Still, last offseason ended with him taking just a one-year deal in Kansas City, where he was expected to compete at both guard and right tackle.

Former third-round pick Jon Asamoah started the season as the Chiefs’ right guard, but when he went down in the middle of the year, Schwartz took over and never relinquished the spot even after Asamoah returned. With more than half a season’s worth of snaps on tape, Schwartz is finally in a position to get paid like the starting guard he deserves to be.

Schwartz’s tape is just a collection of plays from an athlete who does a lot of things well. In a zone-heavy run scheme, he moves with ease, consistently getting to lineman a gap or two over and tracking down players at the second level. And when he gets there, he rarely lets go. Schwartz does a great job sustaining contact, which leads to plays like this one. Several times against Washington, Jamaal Charles used Schwartz as the aiming point of his cutback while Schwartz simply washed the defensive tackle past the hole.

He’s mobile for a player listed at 6-foot-6, 340 pounds, and that frame is also what allows him to capably slide to tackle when asked. As a pass-blocker, that ability to play tackle is fairly obvious. Schwartz is light on his feet, comfortable, and rarely in a hurry when dealing with defensive tackles coming off his outside shoulder. As more and more teams send defensive ends inside on passing downs, Schwartz is the type of guard they’ll need.