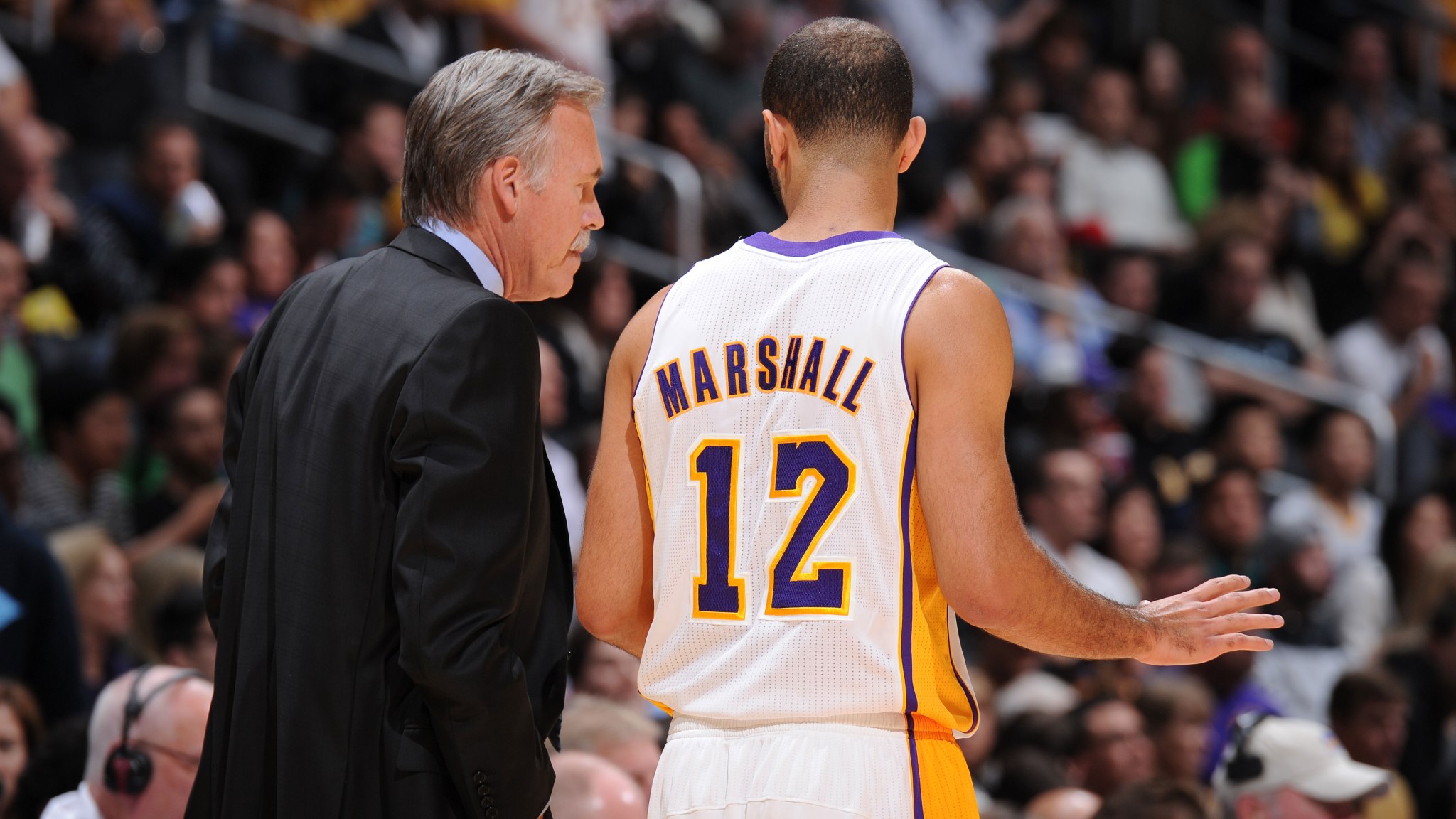 It’s safe to say the Los Angeles Lakers are a bad basketball team. They have 16 wins and 30 losses, bad enough for the sixth-worst record in the NBA, and they’re currently 10 games out of a playoff spot in a brutal Western Conference. Second-round rookie Ryan Kelly is starting at power forward. Kobe Bryant is injured (again) and not expected back on the court for another two to four weeks. Steve Nash recently suffered a setback while getting out of bed.

Things have gotten dark. So dark, in fact, that even the ever-positive Pau Gasol is saying things like, “We are who we are right now. Some nights are better than others but, bottom line, when you lose against the worst teams in the league, you got to ask yourself why and, kind of, what does that make you?”

Enigmatic swingman Nick Young, while speaking to a reporter in the visitors’ locker room following the Lakers’ loss to the New York Knicks last Sunday, felt the need to say, “Just make sure you write something good, man. I’m tired of the negativity, you heard? I’ve been dealing with too much negativity.”

There is a silver lining here, if you’re into that sort of thing. (As someone who has made watching the New York Knicks a significant part of his life, I’ve become an expert at spotting silver linings.) Mike D’Antoni has once again coaxed better-than-expected performances out of a few players who had been previously consigned to the NBA scrap heap. He did it in Phoenix with Boris Diaw, and in New York, where he resurrected the careers of Shawne Williams and Steve Novak, turned Bill Walker into a semi-useful rotation player, and launched the stardom of Jeremy Lin.

This season, D’Antoni has waved his magic wand at Kendall Marshall, Xavier Henry, and Wesley Johnson. The Phoenix Suns selected Marshall, the former North Carolina Tar Heel, with the 13th pick in last year’s draft. But he was such a disappointment in his rookie season that they shipped him to Washington in the Marcin Gortat trade as a throw-in to make the salaries work. Rather than hang on to Marshall to see what they had, the Wizards cut him three days later.

Marshall started this season with the Delaware 87ers in the NBA D-League. In mid-December, the injury-ravaged Lakers signed him to a contract. Marshall got his first start on January 3 against the Utah Jazz, and all he’s done since then is average 12.0 points and 11.5 assists against 3.0 turnovers per game. He’s shot 43.3 percent from the field and 46.2 percent from 3, and assisted on 44.9 percent of Lakers baskets while on the floor.

D’Antoni recently compared Marshall’s ascent to that of Jeremy Lin. Both point guards were toiling in the D-League before joining a D’Antoni-coached squad in December. They both played bit roles for a while (though Lin did so for longer), and then cemented their place as starters with a string of exceptional performances.

Ask Marshall why he’s been able to find the type of success in Los Angeles that he couldn’t in Phoenix, and he’ll rattle off a host of reasons. “I think it’s a bunch of different factors. [Playing in a similar system to the one I was in at North Carolina] is one of them. I’m getting playing time. I also think it’s just experience, getting that time under your belt.”

Henry, like Marshall, was selected at the end of the lottery, by the Memphis Grizzlies with the 12th pick in 2010. He underwhelmed during his Memphis stint, and didn’t fare much better in a stop with the then-Hornets. Then, like Marshall, he landed in the D-League (though Henry’s time there lasted all of one game).

He eventually signed with the Lakers this offseason, and that decision paid off in a big way. At the beginning of the season, Henry got off to a scorching-hot start, shooting 45.9 percent from the field and 47.1 percent from 3, while averaging 19 minutes a night in his first 20 games as a Laker. (He’s tapered off quite a bit since then, but is still averaging career highs in points per 36 minutes, player efficiency rating, true shooting percentage, and many other metrics.)

Johnson, an über-athletic forward out of Syracuse, was saddled with huge expectations after being selected with the fourth overall pick in the 2010 draft. Stuck in a system (the triangle, under former Lakers assistant Kurt Rambis) that wasn’t exactly designed to maximize his prodigious athletic gifts, he failed to crack 40 percent from the field in either of his two seasons with the Timberwolves. Matthews eventually had to be paired with a protected first-round pick just to be shipped out of town. He struggled again with the Suns last season, then landed with the Lakers last summer.

After L.A.’s opening-night victory against the Clippers, D’Antoni had high praise for the combo forward. “What coaches have to coach Shawn Marion?” D’Antoni said. “That was the experience I had and I told Wesley and that’s a lofty goal, no doubt about it, because Shawn is obviously one of the better players in the league — but [Johnson] has a lot of those qualities. He can do that. He can disrupt at the 4.”

Johnson’s been tasked at times with guarding the likes of LeBron James, James Harden, Carmelo Anthony, Joe Johnson, and Arron Afflalo, with D’Antoni selectively deploying him based on score, situation and matchups. He hasn’t been a Marion-level defensive stopper, but he’s acquitted himself fairly well, surrendering baskets on only eight of the 24 shots he’s defended in isolation, and holding his opponents to 41.9 percent shooting overall, per mySynergySports.

Much like Henry and Marshall, Johnson is averaging career highs in multiple categories. Asked about the surprising success he, Henry, and Marshall are enjoying in Los Angeles, Johnson said, “[It’s] just the opportunity. Certain places might not be the right fit. You’ve just got to be in the right place at the right time.”

For so many players, that right place has been on a team coached by D’Antoni. Asked by Vertsberger how and why his system is so often able to turn players who struggled elsewhere into contributors, D’Antoni responded through a Lakers spokesperson, “I don’t know if it’s as much the system as it is us trying to put guys in the right positions and give them confidence and give them the opportunity to do it.”

Marshall, for one, says he’s feeding off that confidence D’Antoni has placed in him. After it was noted that he’s shooting over 15 percent better from 3 this year than he did as a rookie, Marshall cited confidence as the main reason for the improvement. “I think when you shoot it with no worries, the way I look at it is, two things are gonna happen, you’re a 50 percent shooter: You’re gonna miss it or you’re gonna make it. So that’s kind of the mentality I’ve been going with.”

The point guard is quick to make sure, tempting as it may be, you don’t lump the three Lakers castoffs together. “To be honest with you, I feel like it’s hard to put all of us in the same category.” He paused, before continuing, “I can only speak for myself. It’s only my second year. I’m 22 years old. I’m still developing as a player. Xavier is 23, he’s still developing. So it’s hard to really say that we’re ‘busts’ or we’re not what we’re supposed to be. We’re still learning. We’re still learning to play basketball.”