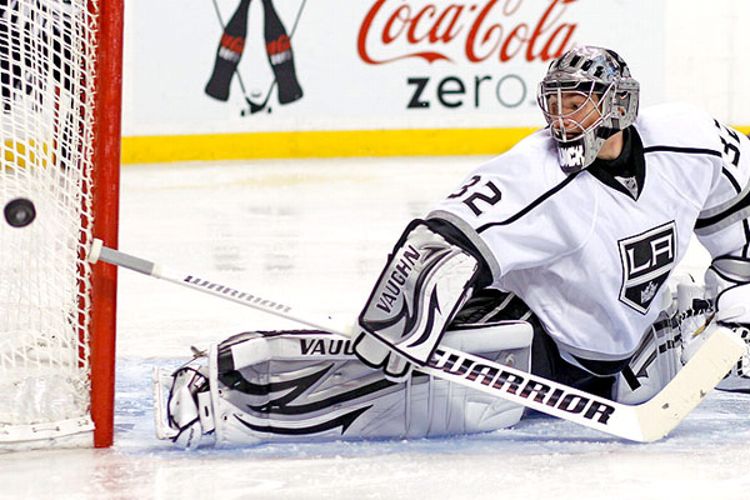 In his 42 starts, Jonathan Quick has given up an average of 1.93 goals per game, making him one of just four NHL goaltenders with a GAA below two. Unfortunately, he’s been having this All-Star season behind the league’s lowest-scoring team, the L.A. Kings. Quick leads all netminders in shutouts, blanking his opponents six times. In the other 36 games he’s played, though, the ones where he’s let even just one measly goal trickle past, Quick has come away with a loss 21 times.

Last week, I watched losses no. 20 and no. 21 at Staples Center, where the atmosphere remains vibrant even as the team’s offense has not been. The two games were like so many others the Kings have played this year: On Thursday they lost 2-1 in a shootout to the Calgary Flames, and on Saturday they fell 3-1 to the Colorado Avalanche. In both games, the Kings scored first but were unable to either add insurance goals or regain the lead after their opponents tied the game.

In the Flames game, Quick had 24 saves, including a big stop in overtime in which he stacked his pads to deny the Flames’ Scott Hannan.

But L.A. could not capitalize on numerous overtime chances of its own and for the 10th time this season, the game went to a shootout. “I had an empty net in overtime and [Dustin] Penner had a rebound empty net, and somehow the puck stayed out,” said Kings captain Dustin Brown. “So we go to a shootout, and it is what it is with the shootout. You win some, you lose some.”

The Kings lose more than they win. They’ve gone to overtime 17 times this season, more than any other NHL team. Among goaltenders, Quick has faced the most shootout attempts, allowing 12 goals in 32 one-on-ones.

Against Colorado, seconds after the Avs scored their third goal on a power play with less than two minutes to play, Quick took a wicked slashing penalty on the Avs’ Daniel Winnik. It was an out-of-character outburst for the normally coolheaded netminder, whose body language is typically far more languorous (when the puck is in the far zone, he has a tendency to chill out with his arm slung over the crossbar like he’s a BMOC on a date). And so many took it to be a sign of frustration boiling over — frustration at his team’s play, its lack of goal support, its subpar year that began with many expecting the Kings to be a potential Stanley Cup contender. The team finds itself in seventh place in the Western Conference and with a new coach in Darryl Sutter, who took over for Terry Murray in December.

“It was the first time I’d seen it,” Sutter admitted when asked about the temper that led to Quick’s slash. He qualified (as a still-fuming Quick himself did in a testy exchange with reporters following the game) that the penalty was simply in retaliation for an uncalled clip behind the net by Winnik, but Kings’ forward Justin Williams said in the locker room that it may have been more than that.

“I know he’s frustrated, obviously, with the late penalties, frustrated that we’re not scoring goals supporting him,” Williams said. “And I’m sure he’d never say that. But we’ve got to do that for him as well.”

Williams had said practically the same thing a few days earlier, though, before the Flames game. “It’s frustrating, not only probably for him, but for us, not giving him the goal support that he deserves some nights,” he said Thursday morning after a team skate. “When he loses 2-1, we feel for him. And I can’t imagine what he is saying in his head about us.” The team, as previously mentioned, lost that night.

It was fitting that in just the third round of Thursday night’s NHL All-Star Game Fantasy Draft, Quick’s name was called out (“Unexpectedly,” Quick later said) by Henrik Lundqvist. (He went before goalies Carey Price, Brian Elliott, and Jimmy Howard.) Last season, Lundqvist often found himself in a similar spot: He’d put his team in a position to win, yet wind up with a loss due in large part to his teammates’ inability to put the puck in the net. One wonders if, once he sees the offensive firepower that will be on display in Sunday’s All-Star Game, he’ll grab onto one of his teammates’ legs and beg him not to make him go back to L.A.

In other goalie news from around the league:

Love Detroit’s Jimmy Howard getting into it the other night — and clearly so did the announcers. “It is the Norris Division! Just like the old days!”

The San Jose Sharks waived third-stringer Antero Niittymaki last week, but the goalie didn’t find out until he got a call from a reporter. “I’m on waivers? Nobody told me anything or called me,” he said, adding that considering injuries he’s had this season and the size of his contract, he wasn’t surprised. “I don’t want to be in this organization at all anymore, nothing wrong with city. Glad they did it, hope somebody picks me up.” And so it felt a little awkward when he went unclaimed and thus remained with the organization, causing him to clarify that the translation of that interview from Finnish to English had made him sound unhappier than was intended.

The Islanders’ Al Montoya had one of the best saves of the season — almost.

When the St. Louis Blues signed Brian Elliott to a two-year contract last week, it was the next chapter in a wonderful story for the goaltender, who began this season on a two-way contract after an unceremonious exit from Ottawa and is now back in the Canadian capital for the weekend as an All-Star. (Elliott had a special helmet made with a blank spot on the back so he can get fellow All-Stars’ signatures.) But for goalie Ben Bishop, a hometown talent who was re-signed to a one-year deal this offseason and expected to battle Elliott for the no. 2 spot in training camp, the signing was an indication that his time in St. Louis might be drawing to a close. The tandem of Elliott and Jaroslav Halak — who recently went on a seven-game win streak that included three shutouts — have become impenetrable not just to opponents but to anyone trying to earn a spot on the Blues’ roster. Bishop, who made the AHL All-Star team this season for his impressive play with the Peoria Rivermen, will most likely be traded before the February 27 deadline, and he’ll be a player worth keeping an eye on going forward.

The Penguins’ Marc-Andre Fleury had an unbelievable performance in an overtime game against the Blues. The Pittsburgh goalie kept it up in the shootout, giving the Penguins a 3-2 win Tuesday night.

As the Nashville Predators have continued to climb up the Western Conference standings as part of the toughest division in hockey — the Central — goalie Pekka Rinne has been a rock in net. Rinne is riding a 10-game win streak and has so far lived up to his seven-year, $49 million contract extension.

And finally, the fact that the San Jose Sharks forward Logan Couture was picked last in the All-Star Fantasy Draft on Thursday suggests to me that the team captains might not have scouted him fully. Who knew kid could play like that in net on top of everything else? Kick save and a beauty!