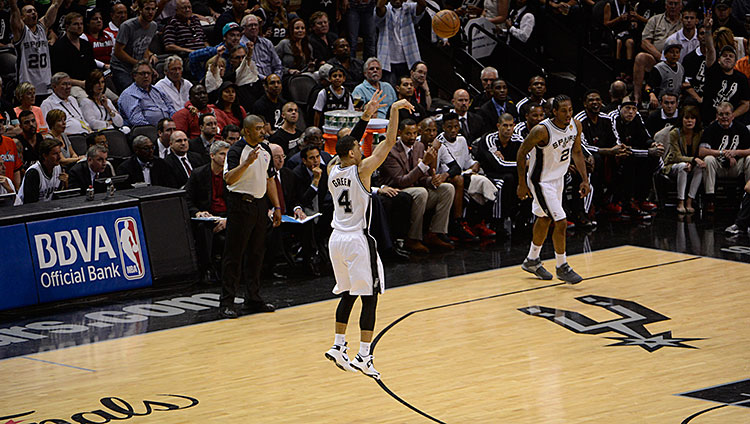 Is it time to move the NBA’s 3-point line back? Has the shot become too easy and too frequent in today’s game?

From an analytical perspective, the 3-point shot is one of the most important scoring options on the court. But is it too easy for contemporary players? During the Finals, the Spurs made an incredible 47 percent of their 3s, which translates to 1.41 points per shot. It’s no wonder they attempted a third of their shots from beyond our magical point-inflating arc. The Heat weren’t too far behind. They made 40 percent of their 3s and also attempted a third of their shots from long range.

The league as a whole is not up to those levels, but it’s not trailing by much. During the regular season, 3s accounted for a record 26 percent of all shot attempts, and shooters made 36 percent of them. Considering that NBA players make only 39 percent of their 2-point jump shots, you don’t have to be Daryl Morey to figure out why teams and players are taking more 3s than ever before.

We’ve reached a point in the NBA when, with the exception of layups, dunks, and free throws, the expected value of a 3-point shot exceeds that of any other shot on the floor. 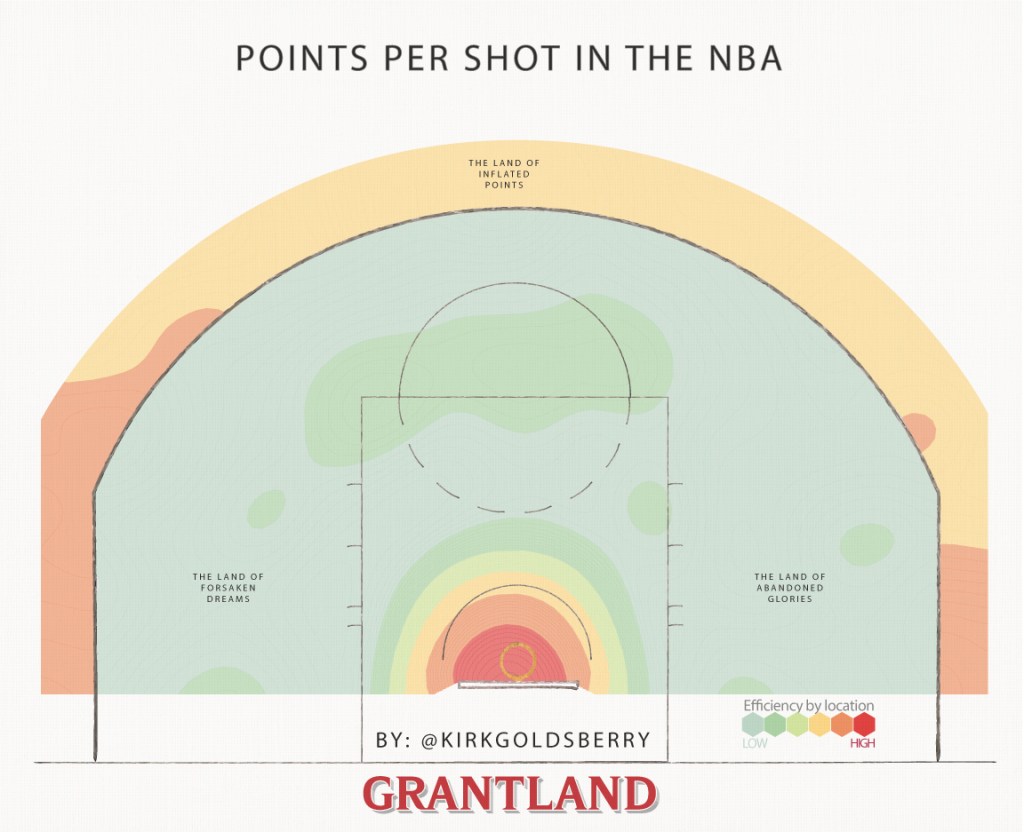 The NBA is a perimeter-driven league now. Is this what we want? From a sheer entertainment perspective, if you’re talking about teams like the Spurs and Heat, you’ve got a gorgeous product on the floor. But there are 28 other teams, and now that players and tactics have evolved to exploit the puffy virtues of the 3-point shot, our game is drastically different than it was only a few decades ago, and those changes are by no means complete.

Aside from the sideline, the 3-point arc has become the most important stripe on the floor. That unassuming curve now affects everything from offensive architecture and defensive priorities to playing time, draft stocks, and free-agent value. Maybe this is all OK, but we have to acknowledge that what started as an ABA marketing ploy has upended the way the game is played at the highest level.

The 3-point shot was introduced to the NBA in the 1979-80 season. It was a concept borrowed from the ABA, whose commissioner at the time, the prophetic George Mikan, suggested that the new line would give smaller players “a chance to score and open up the defense to make the game more enjoyable for the fans.” That’s exactly what happened, but it took some time to really take shape.

The first season after the NBA added the line, 3-pointers accounted for only 3.1 percent of field goal attempts. By the end of this season, that number had ballooned to 25.9 percent. Similarly, in that first year, NBA teams averaged 2.4 points per game beyond the arc; this year that number was 23.1.

The arc has become basketball’s version of a 1960s beltway that would bypass traditional routes near the city center and spawn a secondary economy. Sure, it was exciting, but it also threatened the traditional economic hub closer to the core. The same way that big-box stores pepper the periphery of our cities, spot-up shooters now decorate the edges of every NBA offense. Danny Green is Petco. Kyle Korver is Kohl’s. Trevor Ariza is Best Buy. Nick Young is Olive Garden.

More and more, offensive players are feasting on the all-you-can-eat beyond-the-arc breadsticks, while a rapidly fading old guard is holding down the spaces by the rim — the traditional epicenter of the basketball economy. It may still be vibrant, but as more of the offensive emphasis migrates away, the value of effective interior performers is diminishing, while the value of spot-up guys has never been higher.

During his first trip to the Finals, Tim Duncan defended the likes of and Marcus Camby. This time, Duncan had to supervise Rashard Lewis and Chris Bosh, who love to shop for points way out at Cabela’s.

The 3-point stripe has inflated the value of guys who can shoot from distance at the expense of more conventional “playmakers” and rebounders. One sleepy Steve Novak 3 is worth more than any ferociously awesome Russ Westbrook dunk, yet if the league were to get rid of the line tomorrow, players like Novak might not even earn a roster spot. Of course that won’t happen, but it does illustrate just how much impact the arc has had on the taxonomy of NBA players.

Few would argue that the proliferation of 3-point shots is a real problem, but it’s time to at least think about moving back the line as a means to temper the sprawling perimeter development. It’s also harder and harder to justify an extra 50 percent point reward for a shot that has become only marginally more difficult than any other jumper. This graph shows the relationship between shot distance and points per shot in the NBA during the 2013-14 regular season. You can see why 3-point shots are becoming more popular and why midrange shots are becoming less so. 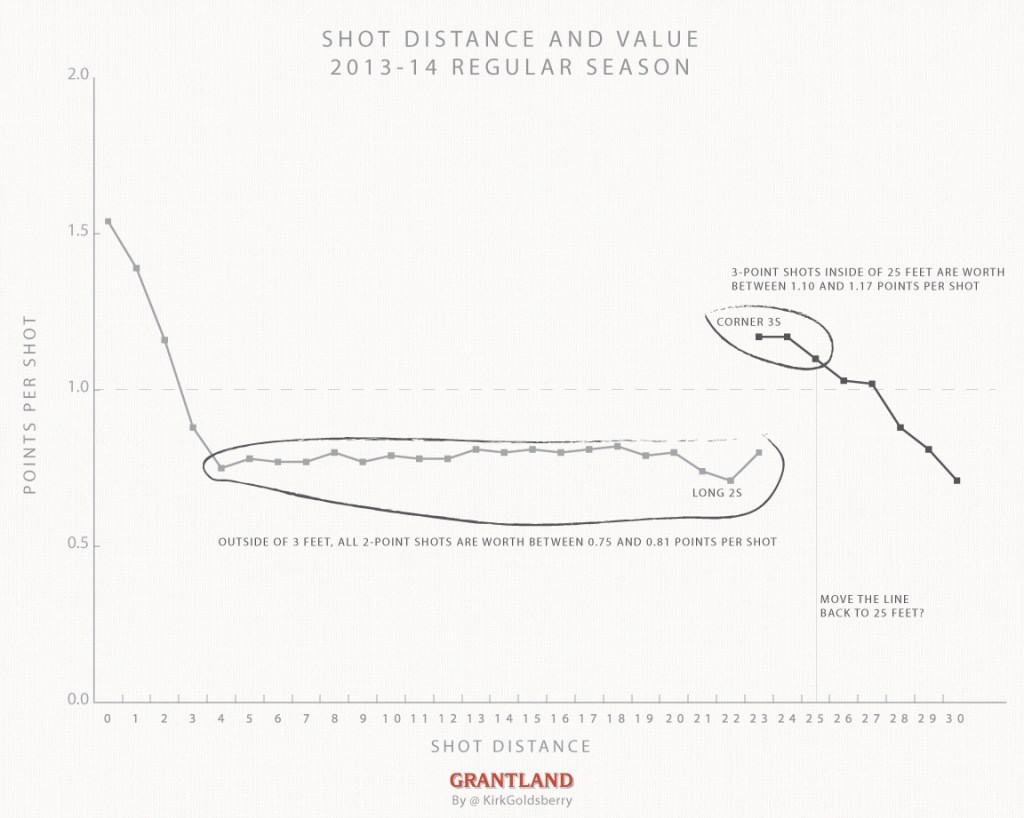 Shooters are better than ever at draining 24-foot jumpers. Part of that is down to the way many teams design offensive sequences with the explicit goal of creating an open shot from that distance.

Moving the line back, thus turning those 24-foot shots into long 2s, is one way to close the efficiency gap that currently is driving the league’s obsession with 3-point shooting.

If the NBA is interested in examining how moving the line would affect long-range shooting, it can refer to its own history. During three years in the ’90s the league experimented with a shortened line (corners were basically the same). Unsurprisingly, 3-point attempts surged. By the end of that window — the 1996-97 season — 21 percent of field goal attempts were 3s. The next year, the league moved the line back about 19 inches to its original position, presumably because that number was too high. The number plummeted down to 16 percent. Keep in mind, this year the league shot 26 percent of its shots from beyond the arc.

We can also learn from the WNBA. Before last season, the league moved its 3-point line back 19.5 inches to correspond to FIBA’s line. The effects were immediate and significant. During the two seasons before that move, 25.3 percent of WNBA field goal attempts came from beyond the arc, and the league collectively converted 35.2 percent of those shots. When the line moved back, those numbers dipped to 21.5 percent and 32.7 percent, respectively.

In both cases the backward moves decreased both the frequency and efficiency of long-range shots, indirectly restoring more emphasis on the 2-point area. A move to a longer, 25-foot arc in the NBA would likely induce similar changes. During the 2013-14 regular season, NBA players attempted more than 52,000 3s. Just more than 25,000 of them were from deeper than 25 feet. As a whole, the league made 34.5 percent of those shots, compared to 38.4 percent of 3s closer than 25 feet. 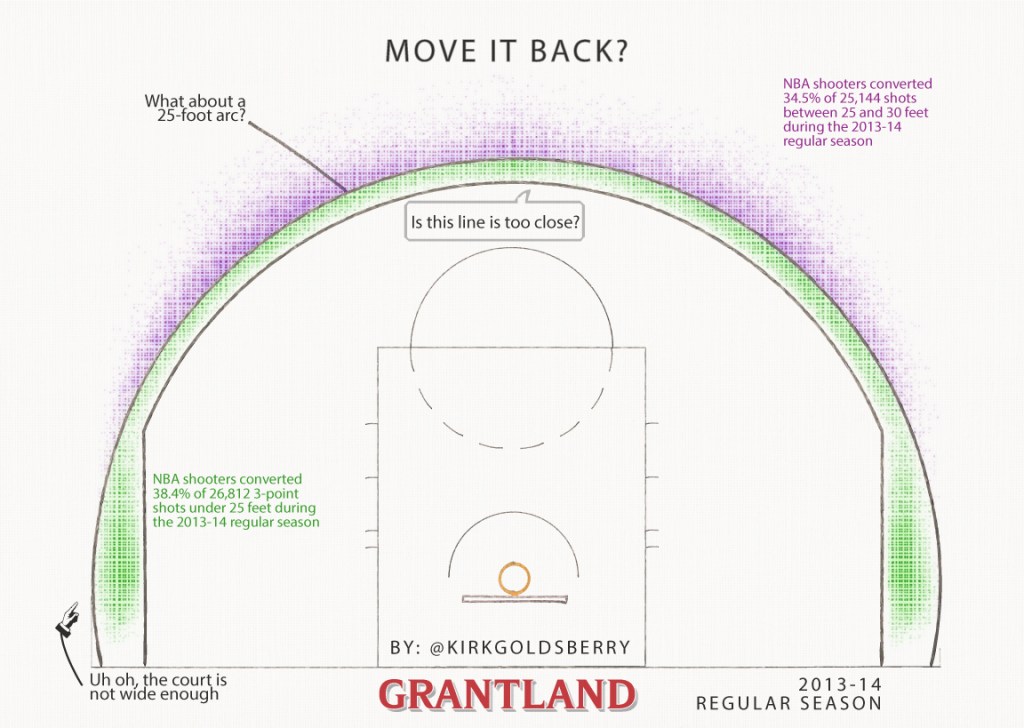 That 38.4 percent number is especially high considering that 2-point shots from outside the restricted area go in less than 40 percent of the time. It’s no wonder the midrange game is dying: Why shoot a 40 percent 2-pointer when you can shoot a 38 percent 3-pointer? Moving the line back would both reduce the proficiency of 3-point shots in the NBA and restore some of that abandoned glory back to the midrange. But keep in mind, it’s not as if a move back to 25 feet would make 3-pointers impossible by any means.

Of course, there’s one pesky geometric issue with moving the NBA 3-point line back any farther at this point — the court’s too dang skinny. As Zach Lowe described in December, that problem has two potential solutions. One is to widen the court to accommodate a longer arc. Right now the court is 50 feet wide and includes a 3-foot buffer between the sideline and the corner portion of the 3-point arc. By adding six more feet of baseline, the league could both eliminate the shorter corner 3-pointers and accommodate a uniformly 25-foot-long 3-point shot. 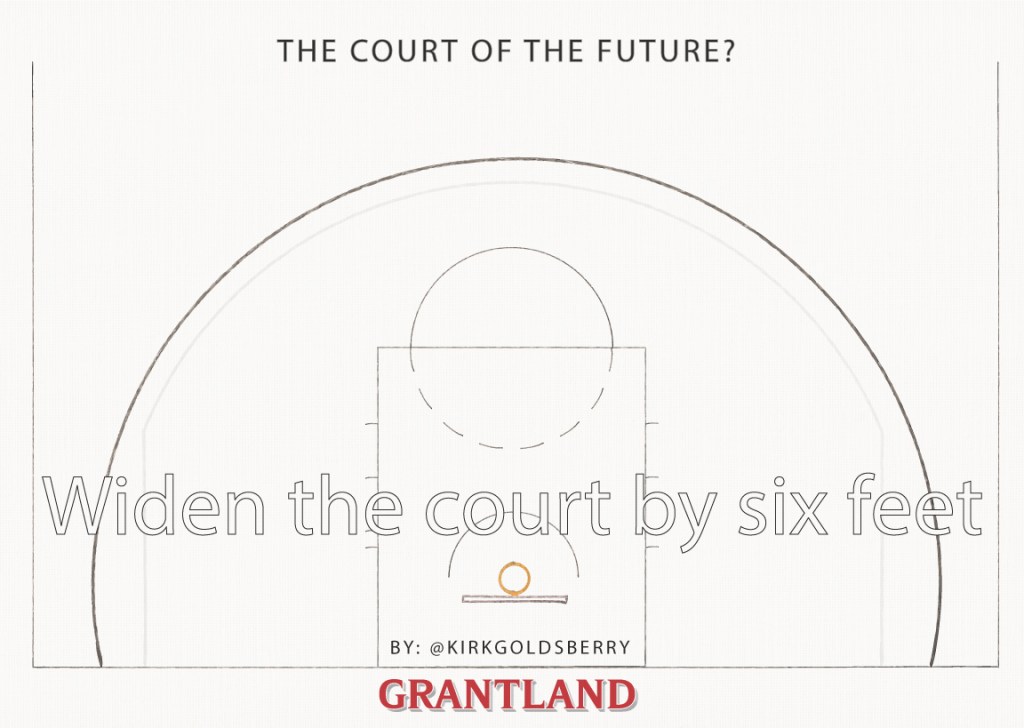 A wider court would open up play even more, and enable teams to sell more courtside seats! However, changing the dimensions of the court is certain to meet lots of resistance — almost every basketball court in the world is 50 feet wide. The other solution is to keep the court the same size and simply eliminate the corner 3 altogether. 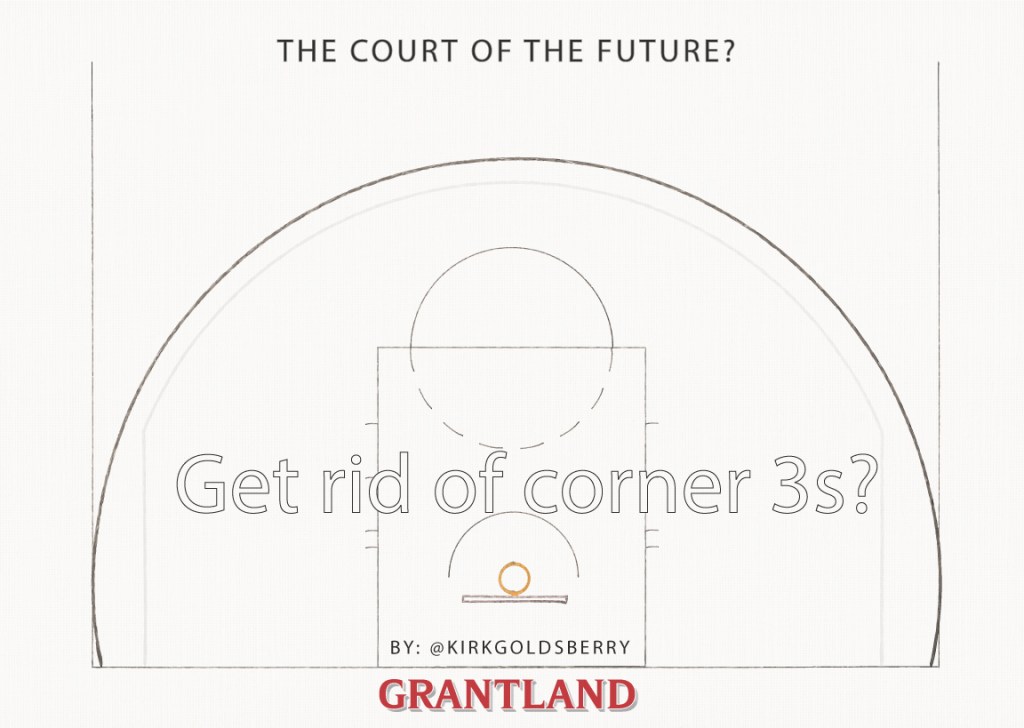 Yet the easiest “solution” of all is to say there is no problem here and just leave it all be. Not many people — including myself — are complaining about the kind of basketball being played right now in the NBA, and if the compliments directed at this year’s Spurs are any indication, people are downright smitten with it. That offense is gorgeous in a way that Duncan’s first championship team 15 years ago was not. Those old teams used to just dump the ball down to Duncan and David Robinson; this year’s team whipped the ball around the edges in search of the optimal shot, which is often beyond the arc. 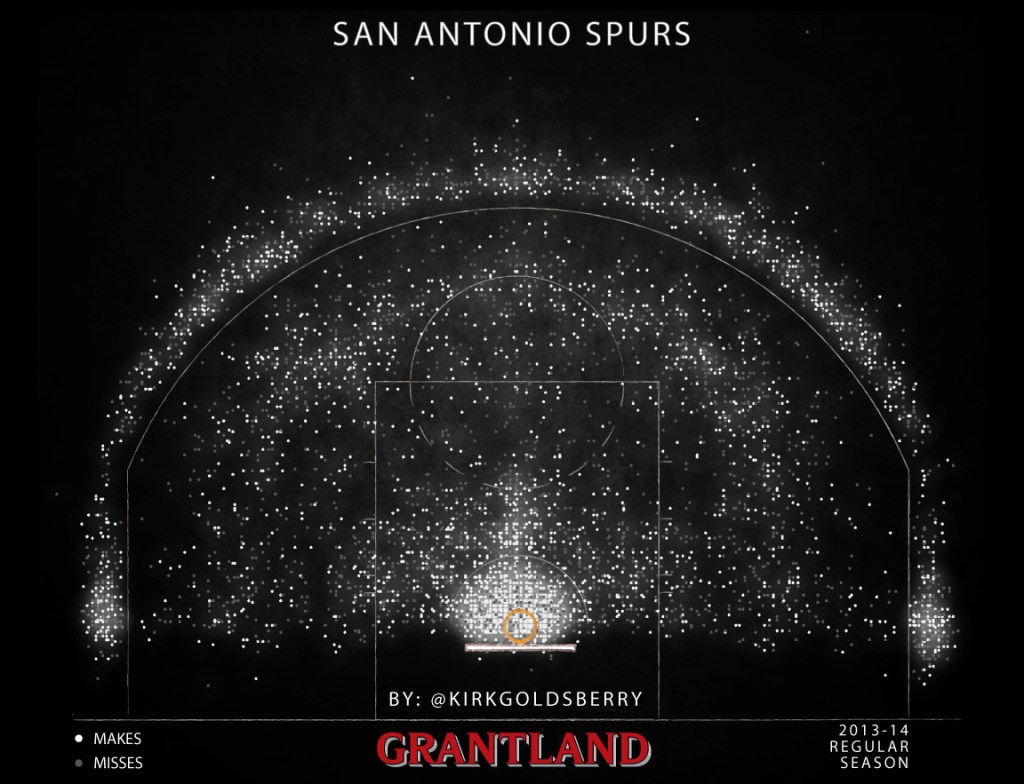 That ball movement is not only fun to watch, it’s also the key to creating those open 3s in the first place. Eighty-four percent of NBA 3-pointers are assisted, so passing is an essential precursor to 3s, and in a weird way, the current line’s position means more pretty passing.

Regardless, the 3-point arc is the NBA’s version of a pitcher’s mound, and just as Major League Baseball periodically raises and lowers that thing to preserve a relatively steady competitive pitcher-batter relationship, the NBA has a responsibility to keep an eye on its own bubble.

We Went There: Watching the USMNT on Copacabana Beach in Rio