We Went There: Watching the USMNT on Copacabana Beach in Rio 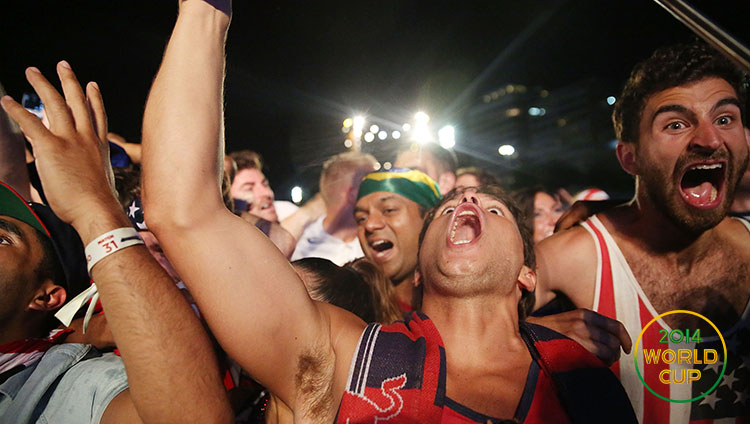 I bought my first caipirinha from a woman with a cloudy right eye. Rio melts easily if you let it, and after a few days, you start to feel like letting it, before it makes you crazy. A few sober days in this city and you can hear the vines growing, hear the stone crumbling on the facades of the Portuguese palaces. Get a little fucked up and everything runs into colored lights. You stream down Copacabana behind a group of mad Chileans singing to a ukulele. You wind up at tables full of strange American tourists who tell you about the shady deals the cops cut with the drug dealers to keep the beaches safe. They heard about it late one night in Lapa, while they watched a gang of cross-dressing prostitutes stomp a would-be mugger. If you go to Ipanema, you can find a little serenity, a place where you don’t hear the mountains as they disintegrate. But everyone goes to Lapa. Everyone watches somebody get stomped.

She had a cloudy right eye and a tray full of caipirinhas. This was right on the beach, but I mean, of course it was. Copacabana during the World Cup is a thousand football tailgates that fell from a thousand cargo planes and landed on top of a carnival sideshow that sprained its ankle while falling on top of spring break. During the course of USA 2–Portugal 2, most of which I watched from a beachfront bar after failing to stick it out at the FIFA Fan Fest, the following things happened to or near me:

• A legless dwarf in a wheelchair tried to sell me an umbrella.

• A beautiful woman who was literally breast-feeding a child, who literally had a small child suckling at her breast, tried very beautifully and with a certain languid sorrow to sell me what I am almost positive was a box of laundry detergent.

• A Guarda Municipal van roared up onto the curb of Avenida Atlântica, and a huge cop leaped out and went chasing after a gaggle of street vendors; he grabbed their stash of Neymar Jr. jerseys and then strolled back to the van while they all followed after him yelling and pointing.

• A man came and laid a three-pack of Nike athletic socks on my table, then came back by a minute later and took them away again.

• Ten thousand or so beachgoers and soccer fans in various stages of colored-light seeking and/or cape-wearing and/or semi-nudity flowed past while the black ocean rolled up on the sand maybe 100 feet away.

I guess what I’m getting at here is that I watched this game, which was already on the mind-exploding side of major sports experiences, under a very particular set of circumstances. So my pro analysis of the game kind of tops out, interactive-blackboard-wise, at a white beam of emotion blasted into space and the realization, about two-thirds of the way through, that I could no longer tell the difference between English and Portuguese. The bar’s TV was also very small, I’m pretty sure, although I can’t swear to anything, including that the bar was on Earth. Still — do you remember ever watching a USMNT performance that was more flat fun than that one, at least between the 10th or so minute and the final 0.01235 seconds? I don’t. I’m not saying there’s never been one, but one doesn’t come to me immediately.

There were all these moments in the first half. Passages where our guys would go rocketing forward, just action-verbing the living fuck out of the universe, and Clint Dempsey would bludgeon a shot a hair above the goal, and then Portugal would get the ball back, and roll it out to the wing, and just kind of stand there with it because there were no options. They would stand there with it in such an aristocratic way, though. It was like, Why, hello there, we are a European soccer team. And then we would get it back and go joyriding back down the pitch like, OH REALLY, BECAUSE WE’RE NOT.

The last part hurt, obviously. On top of Silvestre Varela scoring, there was the whole Ronaldo-being-involved thing, the Ronaldo’s-racing-stripe-being-involved thing, and the continued-existence-of-Nani thing. And it was the latest regulation goal ever scored in a World Cup, which: What is that? It was like we decided to start shoplifting a tenth of a second before the Rapture. So yeah, for a while everyone in the bar doubled over like they’d been stabbed, and I thought about walking into the ocean and not coming out, because the mermaids would shake out their flowing hair and know how it felt to have Jermaine Jones’s wonder goal essentially nullified by a cross from Cristiano Ronaldo.

In the end, though? I’m going with fun. I’m going with DaMarcus Beasley just kind of owned Eusébio’s old team in the World Cup. I’m going with Clint Dempsey, who increasingly looks like he’s about to transform into a vampire bat, blowing the roof off the net. I’m going with a draw that means we still have a live chance to go through. If you focus on decay in Rio, decay will kill you. You can hear the sand dissolving in this city. We have a few more days before we have to think about it dissolving for us.

World Cup Pass & Move: I Can't Believe That We Did Draw!