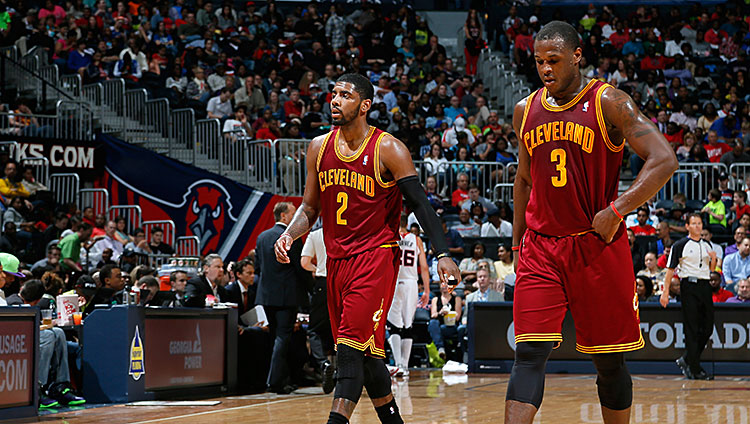 ESPN recently unveiled its real plus/minus stat, which seeks to improve upon the standard plus/minus stat by using a regression based on players’ prior stats to control for lineup variables. High-speed SportVU cameras have been installed in every NBA arena, allowing team analytics departments access to more accurate pictures of specific game states. Researchers are already trying to untangle the mysteries of interrelated player synergies, more commonly known as team chemistry.

We know as much as we have ever known about how to evaluate players and about what metrics indicate a championship-level team. GMs have never had more data, technology, and money at their disposal. And all of it can be undone in a heartbeat if a key player, for no particular reason, happens to loathe one of his teammates.

Hate is unmeasurable and incredibly destructive to team chemistry, not to mention the job security of franchise personnel. Dion Waiters is a talented offensive player who will have a long career in the NBA. Unfortunately for former Cavs GM Chris Grant — the man who selected Waiters with the the no. 4 pick in the 2012 draft — Cleveland’s franchise cornerstone, Kyrie Irving, apparently happens to hate the look of Waiters’s stupid freaking face. For this, among other things, Grant paid the price; he was fired at the beginning of February for something he could not have known about.

So, what’s to be done? Shall we just accept that there is this random, unquantifiable variable — this hate particle, if you will — that has the power to tear the fabric of a team apart, and we can do nothing at all about it?

The technology to recognize human loathing exists. It’s hardwired into our brains. It’s what allowed our ancestors to understand that a person baring his teeth, screaming, and running at them with a sharpened spear probably meant them harm. It’s how you know what the guy you just cut off in traffic thinks of you, despite not being able to hear him through closed windows. Our innate ability to recognize nonverbal cues, also known as “body language,” is a resource we use every day to evaluate social situations, and yet we underrate its utility in a team sports setting.

There have been inroads made in this field of study. Researchers have documented a strong correlation between wins and players touching, hugging, and high-fiving each other. It stands to reason that the opposite is true, that eye rolls, shoulder shrugs, grimaces, and a refusal to engage a teammate in casual bench banter indicates revulsion, loathing, and even hate.

So in the tradition of that kind of scholarship, I humbly present to you the dawn of a new era in player interaction evaluation: true loathing rating (TLRtg).

The Gathering of Data

The first step is to utilize our natural ability to recognize signifiers of loathing, and aid that with modern technology. Using SportVU cameras and Synergy replays, we can count the number of times a game a player rolls his eyes when a teammate speaks, register which teammates sit next to each other on the bench, which ones stand next to each other in the huddle, and which ones high-five.

Contrary to popular wisdom, loathing that occurs in the course of play should be weighted less in our formulation than loathing that happens during dead balls, in the huddle, or on the bench. Why? Because players’ natural competitiveness means they will tend to display frustration over passes not made or shots missed, and frustration over bad play is normal in this setting. Rolling of eyes and refusal to make eye contact when nothing is happening, though, is more indicative of true feelings. These loathing indicators will give us our raw on-court hate (ROC), just one of the numbers we will use to calculate TLRtg. 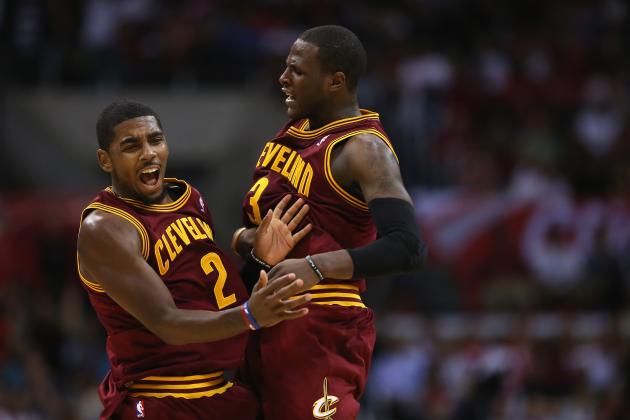 Social media gives us another point from which to gather loathing data. NBA players are heavily represented on Twitter and Instagram. We can monitor how teammates feel toward one another by how they interact online. Do they follow each other on Twitter, for example? For our purposes, a lack of a follow is a decent indicator of loathing, but a sudden unfollow is a strong indicator, as are any signs of Twitter beef.

Another strong indicator is if multiple players on a team all follow one another and show signs of being active together off the court, but also refuse to follow or include the same teammate in off-court activities. These factors weighed together will give us our extracurricular hate number (ECH). Example: 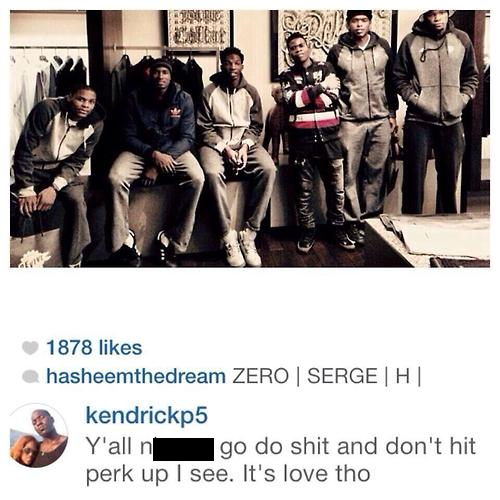 Group avoidance is a strong hate indicator. This event carries an ECH value of plus-3. 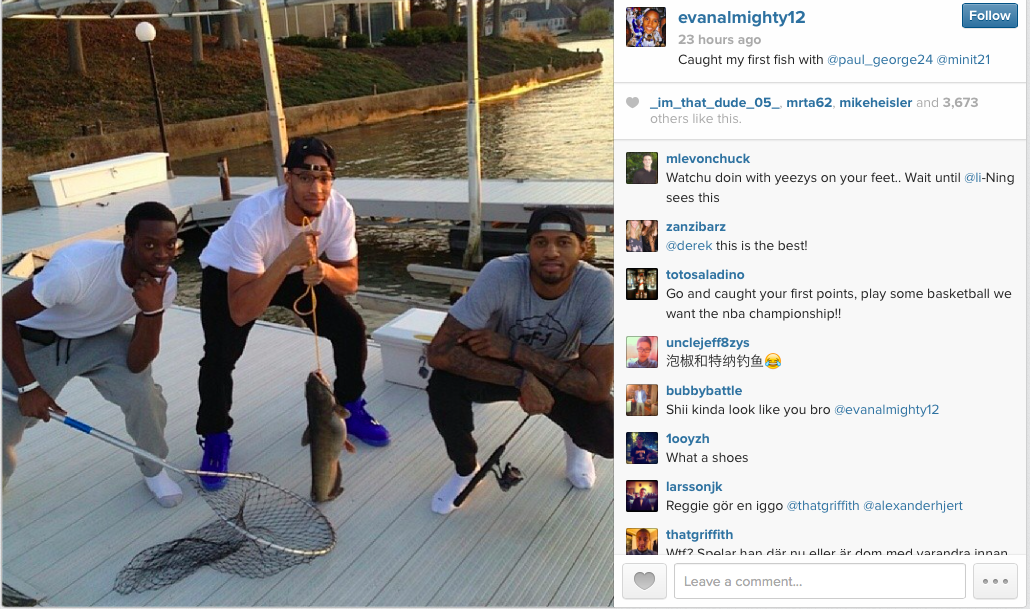 Fishing is a great way to lower a player’s ECH. The activity requires players to spend time together in a small watercraft while drinking beer, a very difficult thing to do with a high TLRtg. This picture carries an ECH of minus-12.5.

One of the easiest indicators of hate is if a player ever uses the word “hate” to describe his relationship with a teammate, regardless of whether it’s to deny actually hating the teammate. Simply being asked if you hate someone, or, if that someone hates you, is a decent indicator that you and that person, at a minimum, do not like each other. The same is, of course, true for athletes.

This quote carries a VLI of plus-20.

In the above quote, Waiters uses the word “hate” four times in reference to his relationship with Irving. This is a strong indicator they actually hate each other. Use of the word “hate” or any of its synonyms to describe feelings toward teammates will be compiled to give us our verbal loathing indicator (VLI).

The Pacers are an interesting case when viewed through the lens of TLRtg. Pacers center Roy Hibbert diagnosed the team’s struggles as stemming from “some selfish dudes in here.” Calling out teammates in the press by terms that carry loathing signifiers is notable, but Hibbert’s VLI score for this outburst is only plus-3.4 because the comments are directly related to the team’s on-court play.

• Counterintuitively, small samples are preferred when calculating the numbers that are used to formulate TLRtg. Familiarity, as the saying goes, breeds contempt. Hatred bubbling over after a period of several seasons together is common, and, more important, easy to see coming.

What interests us is the sudden, seemingly random “This guy has a punchable face” hatred that we’ve all felt just looking at a coworker or a friend of a friend or a person we’ve just met. In most situations, people seek to keep their emotions neutral around new acquaintances. Outwardly displaying loathing early in a relationship is highly indicative of just the kind of random face-punch feelings we are looking for. Thus, Irving and Waiters’s interactions are more concerning to us than, say, the more earned hatred of Shaq and Kobe circa 2002.

• Lineup data and on/off numbers will be used to augment TLRtg, though the ratios are still being worked out. Of interest is whether a player’s numbers drops when the teammate that TLRtg indicates he hates is in the game.

• Speaking of Kobe, the maximum TLRtg number will be set to Kobe’s career TLRtg of 30, much in the same way that league-average PER is pegged to 15. We just have more data on teammates hating Kobe than anyone else in league history.

As with any emerging analytical model, we will be constantly looking to tweak and improve our method for quantifying teammate hatred. We hope you’ll take this journey with us.