Q&A With Atlanta’s Mike Scott: On Winning 16 in a Row, Becoming an Astronaut, and Reigning As the Emoji King 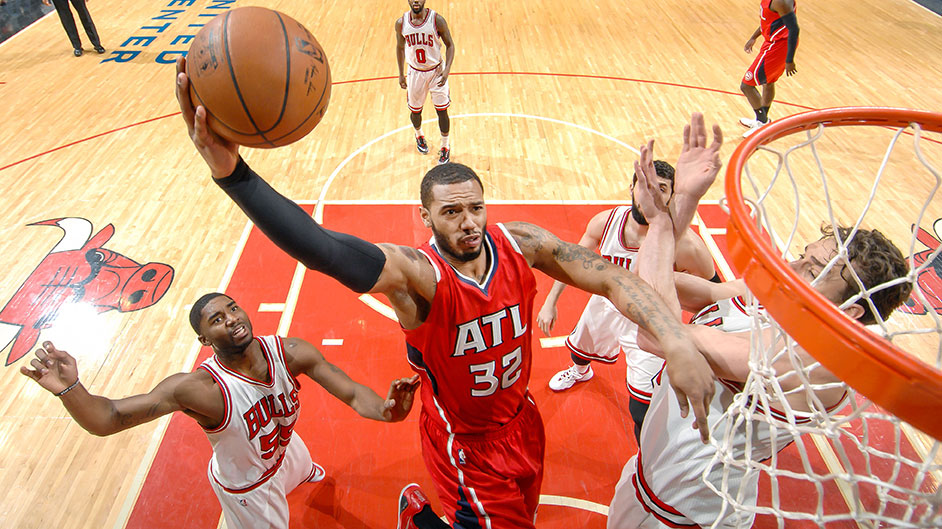 The Eastern Conference–leading Atlanta Hawks are an indie flick full of actors who, for the most part, you only sort of recognize. Chief among them is Mike Scott. A third-year forward who comes off the bench, Scott exploded onto SportsCenter last year during the first round of the playoffs, when he thrashed the Pacers for 17 in a single quarter. Although he’s reprised his bench role, averaging 15 minutes a game, he dropped 20 against the Pistons on national TV last week. After a recent practice, before the Hawks tied their franchise record for consecutive wins — now 16 and counting — Scott sat down with Grantland for a few minutes. Speaking quietly, he let his emoji tattoos do most of the emoting.

It’s been an unusual season, to say the least. Take the dunking we’ve seen recently: Kyle Korver and Pero Antic aren’t exactly known for jamming. Whose dunks have been more surprising?1

I’d have to say Kyle’s. I was on the court when Pero had his the other night. I was setting a screen and I just turned around and Pero was flushing it. I saw Kyle’s from the bench, a much better view. Everyone always talks about how all he does is shoot 3s. Everybody was sleeping on his athleticism. And he’s 6-foot-7. He can get up there. I think Paul [Millsap], Al [Horford], or Kent [Bazemore] are the best dunkers on this team, though. I’ve had a few good ones myself. I like to get out in the open and do fun stuff. Once in a while I’ll dunk over somebody.

How long have you been dunking?

Was your dad an athlete?

Just in high school. Then he became a Marine. He was very strict. He was on me a lot. Very hard. Sometimes I didn’t like it. But I see what he’s taught me. I wake up early every day on my own now. It’s stayed with me. I make my bed still, too. Tight sheets and everything.

What’s an “early” wakeup time for you?

Seven thirty. No alarm. I just do it naturally. I’ve got his voice in my head.

But you’re clearly your own man. You don’t hear about Marines using emojis …

Yeah. Sometimes I text someone, and I won’t even use words. It’s just all emojis, and they understand what I’m talking about. Some of my friends are like, “You just really are the emoji king. You only use emojis.” It’s true.

And, in case you don’t have your phone handy, they’re all over your body.

I’ve got like 29 on me right now: smiles, frowns, lips. They’re just me. Original. It’s just the type of person I am. I’m different. Like, in the NBA, everyone has a basketball tattoo. Or your initials on the back of your arm. I’m guilty of that one, too, actually. I got that back in college.

What does it say on your forearms?

“No one can see through what I am except for the one who made me.” And “The wages of righteous bring them life. But the end of the wicked brings them punishment.” Inspirational quotes, I guess you could say.

What don’t most people know about you?

I like astronomy. I’ve got this astronomy tattoo with all the planets lined up. I don’t know when it started, but I’ve always been a fan of astronomy. I like astronomy movies. I saw Interstellar; that was great. Gravity, too. If I weren’t playing basketball, being an astronaut would be cool. 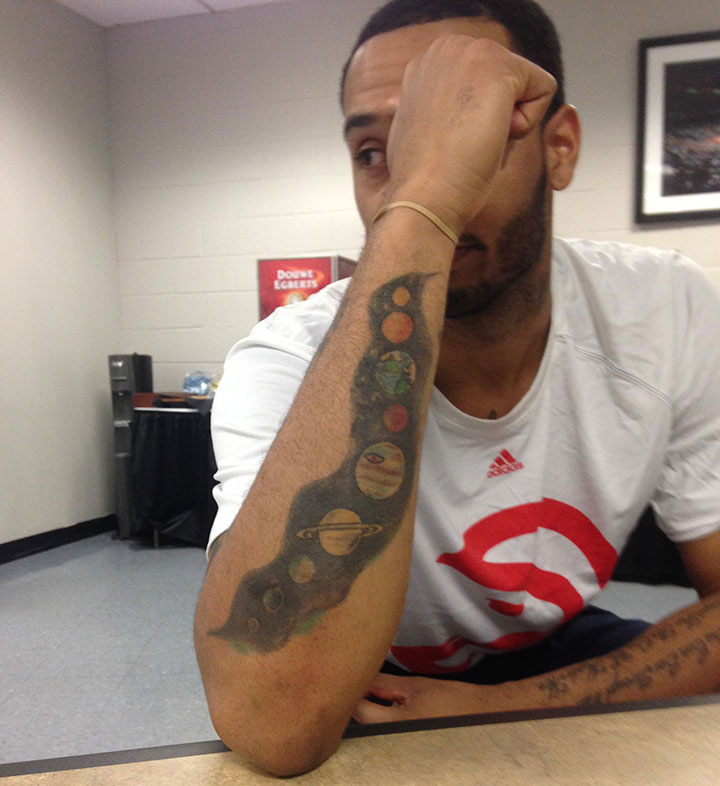 So, the Hawks haven’t lost since late December, and your college team — second-ranked University of Virginia — hasn’t lost all season. Which team is most likely to run the table from here?

Hopefully both. UVA is doing great. I watch all their games. I just can’t believe they’re playing so great like that, how they play together. Coach Bennett really has those guys on a great program. I’m just waiting for Kentucky to lose, so [Virginia] can grab that no. 1 spot.

What’s been the Hawks’ biggest win to date?

As a team, I think, the Chicago win was a really pivotal game. We felt they were coming back, and it came down to the end and we pulled it out. Us beating the top teams in the league and in our conference has been great. It shows to everybody that we can play. We just want to keep playing unselfish and be humble in victory.

Who should make the All-Star team from the Hawks this year?

I want the whole starting five to go. They all deserve it.

Kyle says you’re one of the funniest guys on the team.

I’m very sarcastic. I know how to be serious, and I know how to be playful at times. I like to interact with people and be social. My humor is like That ’70s Show, Family Guy, King of Queens. I love those shows.

I’ve heard guys on the team compare this group to a college squad.

Yeah. Our team, our bond, the way you see it on the court and on the bench, when we go out together. There’s no egos on this team. Everyone is trying to play for one another. You see it every night. No one is trying to have a one-man show. It’s a different person every night. It’s definitely like a college team. But of course everyone has their families. We don’t all live in the same dorm or something and do our laundry together.

What do you guys do together?

And people are dancing now at Philips Arena, too, for a change.

We noticed it. With each win, with each home game. The fan base is starting to grow. The country is starting to see it. We just want to worry about each game. But it is cool to see Young Jeezy, 2 Chainz, Trinidad James, guys like that in the front row more and more.

The Original Saboteurs of Super Bowl Media Day: ‘Punch It Up, Cubby! Punch It Up!’