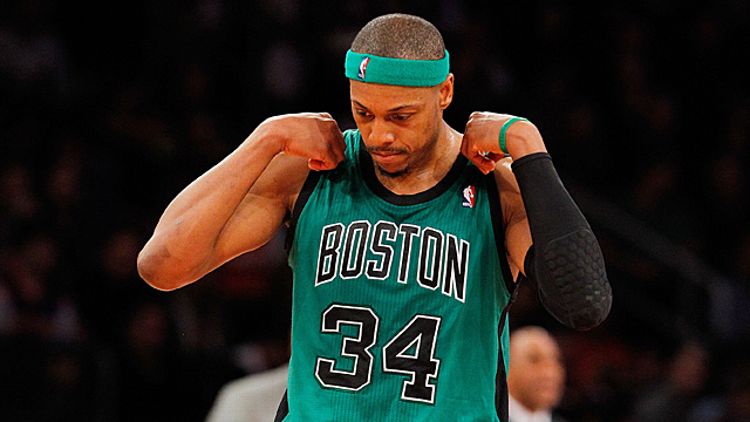 In preparation for the NBA playoffs, this is the first of four entries breaking down one key play or action central to the success of each playoff-bound team. Check back later this week for the remaining 12 breakdowns.

New York was considered a relative afterthought in the Eastern Conference before the season started, but thanks to a shift in its offensive philosophy, the Knicks now represent the biggest threat to Miami. Their explosive offensive scheme leans heavily on their star forward to create mismatches in isolation plays all over the floor.

Knicks coach Mike Woodson gets Anthony into these spots in two ways. The first is by using false action.

By using a loop cut or quick down screen, the Knicks give Anthony just a little separation in order to cleanly get to his spot and use his jab-attack game. But because the team has played a vast majority of the season with one lone big (or sometimes none at all), it’s also been able to just let Anthony walk into isos without any help.

The key to Anthony’s success is the newfound space he has to operate. With shooters spread around him, teams are forced to pick between letting Anthony attack an overmatched defender one-on-one or leaving an open shooter on the perimeter.

In the absence of Rajon Rondo, the Celtics have gone to a pick-and-roll-by-committee approach in order to create half-court offense. It’s a system in which everyone from Terrence Williams to Pierce will get the opportunity to manufacture shots off the NBA’s most prevalent action.

One consistent thing you will see from Boston all postseason is that its inverted pick-and-roll is used primarily at the end of quarters. In this action, Pierce will receive a ball screen from one of Boston’s guards — typically Jason Terry or starting point guard Avery Bradley — instead of the other way around.

This has been a Doc Rivers special for years, and it’s very tricky for opposing defenses to guard, given the savvy veteran forward’s skill set. If teams switch, Pierce will drag the opposing guard into the pinch post for an isolation. If teams use a standard stay-attached-and-go-under coverage, Pierce is often able to find space to drive or shoot his patented pull-up 3 off the bounce.

While this technically isn’t a set play or action, it is what makes the Heat the Heat. For all the maturation in LeBron James’s offensive game, he, along with Miami’s other two stars, are still best in the open floor. To create opportunities for James, Dwyane Wade, and Chris Bosh to get out in transition as often as possible, Miami head coach Erik Spolestra has implemented the league’s most aggressive defensive scheme in an effort to produce the live-ball turnovers that lead to all those highlight-reel dunks.

One overlooked factor about this Miami team is that James is perhaps the best weak-side defender in the league. When the Heat aggressively attack an offensive action on the strong side, a help defender on the opposite side of floor is often asked to “gap two,” or optimally position himself to defend two offensive players at once. For most NBA players, this is a tough task. James is not like most players.

James is the one player in the league who actually turns “gapping two” into an advantage for the defense. Any offense looking to swing the ball to the weak side does so knowing James is adept at using his size, speed, and instincts to get into the passing lane and turn a bad pass into a quick dunk for the Heat.

So when the postseason grind slows and Miami badly needs a basket, it will rely on its defense to help supply it.

The struggling Bucks have been heavily reliant on Ellis to create offense in any fashion possible. Though he runs off screens and calls his own number in isolations, the erratic guard has been seeing more and more time in pick-and-rolls all over the floor.

Though Milwaukee head coach Jim Boylan has done a good job moving him around to different spots in this action, the big problem with this as the Bucks’ primary source of offense is, well, Ellis. As a mediocre finisher and poor jump shooter who struggles going to his left, he is rather limited as a primary offensive option. But with that said, Ellis still remains the team’s best chance to score. If you’re looking for a reason why Milwaukee’s playoff run will likely end in ugly, abrupt fashion, this would be it.