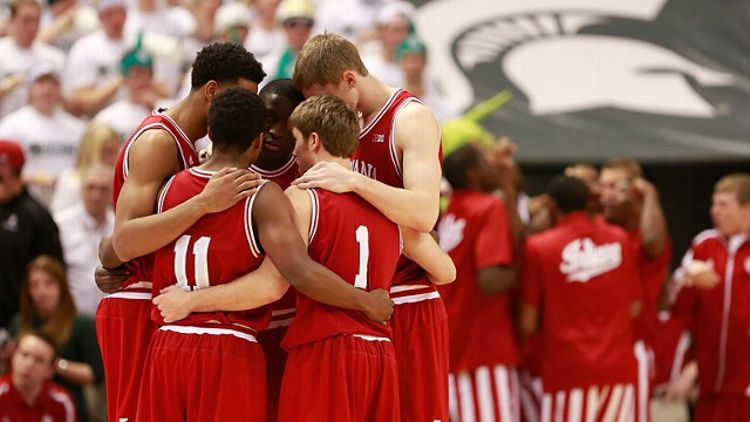 Eight years ago, college basketball was the most important thing in my life.

As I hit my 20s, that love of college basketball — and Duke — slowly fell away. I like to think it’s because I became less of an asshole, but I suspect there’s more at work. When the latest Golden Age of the NBA began to take shape, and it became clear that I was free of experiences like the Baby Bulls and the 2005 Finals, it felt like pro basketball had again turned into the product worth watching. Players like Kevin Durant and Derrick Rose only stoked that fire, and by this season, I’d managed to make it until February before taking in a full college basketball game. With the lackluster slate of NBA games last night, Indiana–Michigan State seemed like as good a place as any to see if I could start things up again.

I’d watched enough college basketball last season to become familiar with Victor Oladipo. At that point, he was a long-armed super athlete who managed one crazy dunk every few games and spent most of his time driving opposing backcourts insane with his perimeter defense. I knew this season had come with some marked improvement — to the point that he would likely be an All-American and a candidate for player of the year — but as I took in the first half, I realized just what that meant.

Oladipo ended Indiana’s 72-68 victory with 19 points, nine rebounds, and five steals, but as far as the latter two go, it seemed like more. A lot of basketball players who spend their time slapping the floor and flailing around are considered “active,” but I can’t remember watching a college player whose activity is so consistently useful. Oladipo’s hands are always around the ball. If he’s not taking it away from his man, he’s getting in a passing lane, or blocking a shot, or tipping a rebound. As a shooting guard, he affects every element of the game defensively; it was that, and not a nasty crossover and finish in the first half, that reminded me of another player Tom Crean coached in college.

When the Heat won the title last season, and small-ball became the newest chic NBA trend, a misunderstanding formed about what it took to build a championship team. Miami’s ability to play without a center was due in part to its having the best two rim-defending perimeter players in the world. We know all about LeBron James, but Dwyane Wade and his hands and his shot blocking and his rebounding are just as much as a part of it.

Watching Oladipo last night, it was that part of his game where the Wade comparisons felt the most fitting. On paper, Michigan State’s advantage should’ve been inside. With Derrick Nix and Adreian Payne down low, and with Keith Appling struggling all night, the Spartans should’ve looked to lean on the block and the glass. They didn’t, and while part of that was Nix and Payne both playing smaller than they are, part of it is Indiana’s entire team playing the type of defense that makes them seem bigger than they are.

In a draft with few sure things, Oladipo will likely shoot up boards in the next few months. There are some reasons to question the sustainability of his newfound offensive efficiency (his 71 percent True Shooting figure is fourth in the nation, and his 3-point percentage has jumped from 21 percent to 51 percent in only a year), but there’s comfort in taking a player whose above-average NBA skill is already clear. At 6-foot-4, and with those arms, Oladipo will be able to defend both point guards and shooting guards at the next level.

Cody Zeller’s NBA future doesn’t seem as certain — at least to me — but he’s one hell of a college player. Over a three-possession stretch in last night’s first half, he abused Nix in just about every way possible. First, it was pushing the bigger man around to establish position deep in the paint for an easy left hook. Then, it was a pick-and-pop from 17 feet that looked easy. And finally, a seal that gave point guard Yogi Ferrell an easy path to the basket for two points. With two truly elite players in him and Oladipo, and Jordan Hulls and Christian Watford spacing the floor, it’s hard to imagine a team with a better starting five than Indiana when it’s clicking.

For Michigan State, the most impressive player on the floor was Gary Harris. The freshman played great defense on Oladipo in the first half, and down the stretch, as Appling struggled, Tom Izzo ran the offense through Harris on each possession. A missed layup on a drive with 20 seconds left would’ve put Michigan State up by one, but it was the right play in the right situation, and it was clear that Izzo had more trust in his freshman than in anyone else when the game was close.

There were stretches last night — mostly the end of the first half, when no one seemed too interested in taking good shots or scoring — where things got a bit ugly, but most of the game was a reminder about how good this version of the game can be. Both teams were up and down for much of the game, and especially with Indiana, watching a team play that hard and together on defense was something to see. For the next couple months, I’m pretty sure my TV schedule just got a little tighter.