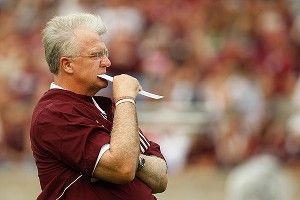 Kevin Sumlin beat Alabama on the road Saturday. He did. I didn’t think he could, but he did. Was I the only one thinking about Mike Sherman — Sumlin’s white-maned, low-talking predecessor — and the supporting role he played?

Sherman was fired as the Aggies coach last year. If not for his cameos on Hard Knocks, we might forget he even existed. But just like I can’t imagine a Sherman-coached Aggies team winning a big game in Tuscaloosa, I can’t imagine Sumlin winning without the key pieces Sherman left behind. Let us praise a fired coach.

The Mike Sherman era won’t go down in Aggies history. Sherman’s record was 25-25. He lost a home game to Arkansas State. Last November, he lost to the Case McCoy Scrambling All-Stars — one of the many times he’d blow a second-half lead. A few days later, Sherman was fired by cell phone while he was in a recruit’s driveway.

But Sherman did a few things brilliantly. The biggest was recruit offensive linemen. Take the class of 2010. Sherman didn’t have many hole cards. The Aggies were coming off a 6-7 season, and their arch rival, Texas, had just played in the national championship game.

Sherman still got two great tackles out of the class. The first was Luke Joeckel, from Arlington. Joeckel had offers from Alabama, LSU, Oklahoma, and a host of superior programs; his dad played football at Texas Tech. Sherman countered by offering a scholarship to quarterback Matt Joeckel, Luke’s twin brother, who had offers from the likes of Baylor, Texas Tech, and Houston. What’s more, he pursued both Joeckels fiercely. “They recruited us harder than anyone else,” Matt told AggieYell.com after they committed.

Sherman’s second get was Jake Matthews, the son of Bruce Matthews, an NFL All-Pro. Matthews was an Aggies “legacy” — his brother had played there — but he had offers from Texas, USC, and Oklahoma. Here, Sherman sold his résumé as a former offensive line coach. This was compared to the coaches in Austin, who were playing linemen who looked like they had brighter futures in quantitative analysis. Sherman’s pitch convinced Bruce Matthews. “I really like the program they have going and Coach Sherman,” Jake Matthews told Rivals.com after he committed.

Joeckel and Matthews were enormous gets, and not just because both whipped their Bama counterparts on Saturday. At a low point for A&M football, Joeckel and Matthews started a combined 20 games as true freshmen. They helped rescue the program from oblivion. The Aggies went 9-4 that season and made the Cotton Bowl. That September, Sherman was able to convince a running quarterback not yet named Johnny Football to break his commitment to Oregon.

When he was fired, Sherman said, “I feel like the program is definitely headed in the right direction and I hope the next coach appreciates the opportunity he’s going to get to work with these players.” Which is not to say he was Ara Parseghian. Or that Sherman got a raw deal. It’s to say that even bad coaches do stuff right, that their legacies often aren’t as shitty as they might seem, and they play their unglamorous role when a team like the Aggies finally gets over the hump. Whoop.