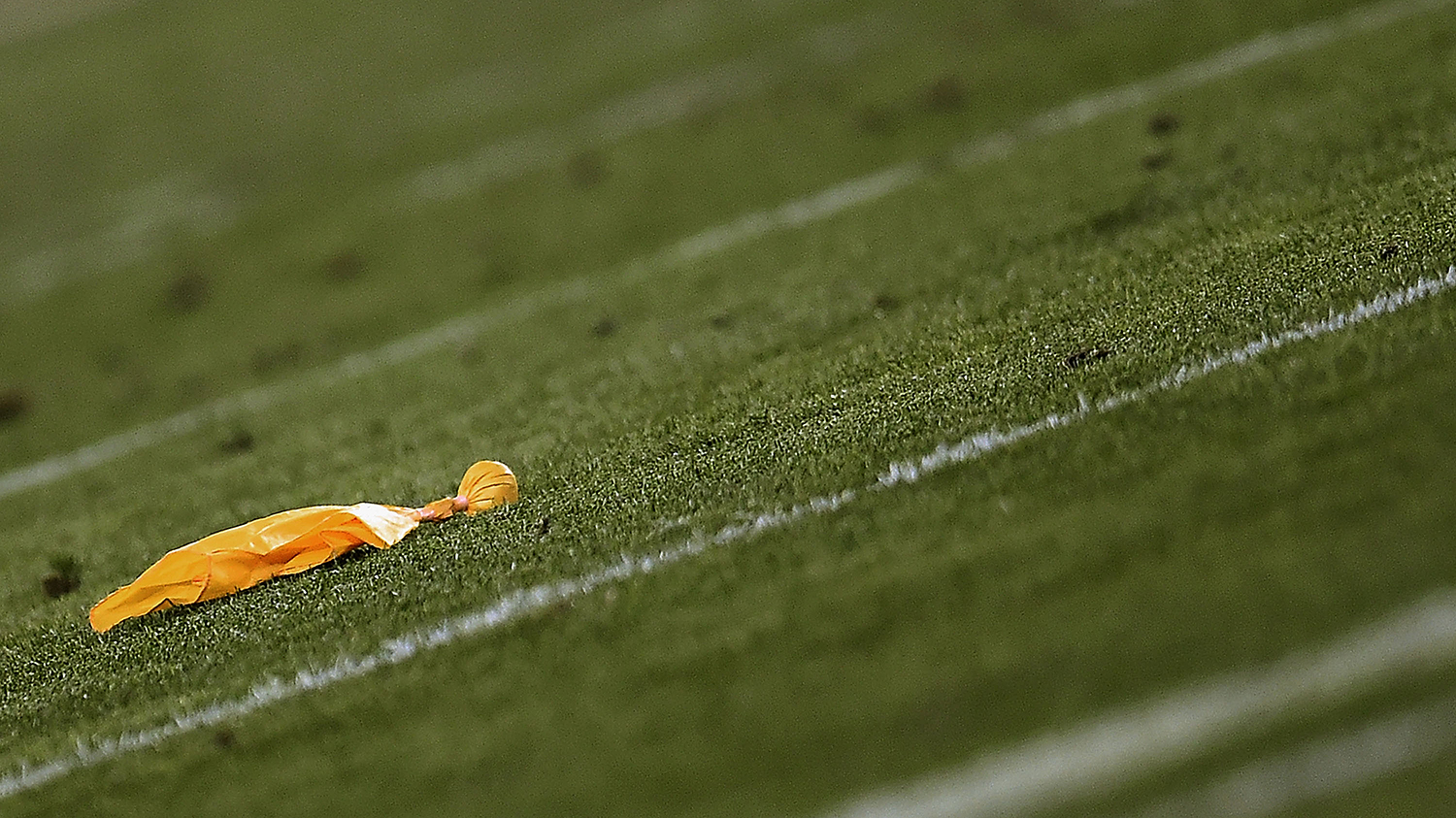 January is a special time on the football calendar. Between the college football playoffs, bowl games, and the NFL playoffs, even hopeless basketball dorks like me find themselves parked on the couch watching countless hours of football. I love it for the most part, but there’s something about the football-watching experience that drives me crazy, and it involves penalty flags.

The average NFL game this season saw about 13 penalties per contest. But unlike other sports, football’s penalties commonly occur amid play and do not stop the action. That usually leaves a strange interval between the time a flag is thrown and the time that the charges are explained. During this window, fans are left wondering what happened and announcers freely speculate on the call. In the information age, this “flag lag” is one of the most annoying parts of the whole football experience. And it’s unnecessary.

As someone accustomed to basketball, I expect the official who calls an infraction to immediately communicate something about the violation he just witnessed. In basketball, we don’t have to wait more than a second or two to find out if it was a block or a charge. In football … get comfortable. It’s a waiting game.

Take this example, from a game this season before the Seahawks traded away Percy Harvin. After Russell Wilson threw a quick pass to Harvin, the former Florida star raced 25 yards for an apparent touchdown. However, as he darted across the 20-yard line, a flag was thrown, which naturally cued the yellow flag graphic to appear in the overlay on the bottom of the screen.

Even as Harvin crossed the goal line, the flag graphic delayed the natural reaction to celebrate a score. The whole thing was a weird anticlimax. And that’s just the reaction from an observer’s point of view. The impact of a flag that could wipe a touchdown off the board, and prevent the Seahawks from going up 14-0, is pretty enormous, especially with Kirk Cousins out there for Washington.

Should the Seahawks celebrate or head back toward the line of scrimmage for a redo? We wait with bated breath.

Hang on, let’s watch this guy turn on his microphone and mosey over to the middle of the lawn to address the press box with some obscure brand of pre-war sign language.

Flags signify more than just penalties. For fans, coaches, and players, they also commonly represent huge inflection points; they have the potential to negate seemingly huge plays, like Harvin’s dazzling touchdown. But that’s only potential, and many flags — the ones that get declined — turn out to be meaningless and forgettable distractions that just needlessly troll the emotional inertia of the football experience.

The good news is that there’s a simple way to fix it.

Football needs two different colored penalty flags — one color for offensive infractions and a separate color for defensive ones. Imagine that Harvin play unfolding in a parallel universe where black flags signify defensive penalties and the traditional yellow flags are reserved for offensive infractions. As Harvin crossed the 20-yard line and the flag was thrown, spectators, announcers, players, and coaches would all immediately recognize the guilty side, and consequently their emotions wouldn’t be held hostage by some unneeded informational embargo.

These kinds of lags seem particularly silly in the era of real-time everything. My toaster1 shouldn’t be more advanced than the NFL’s on-field technology. We’ve streamlined every other form of communication, so why can’t we streamline the communication of penalties in football games?

Officials are trained to throw flags immediately when they see an illegal action. Is it too much to ask for them to differentiate between two items in the heat of the moment? Maybe, but I don’t think so; consider these two things:

1. Anyone who has ever driven a car is asked to manage two or three pedals with their foot, all while navigating the streets, sometimes at high speeds. How often do you slam on the accelerator instead of the brake, or vice versa?

2. Every athlete that the officials share the field with is tasked with perpetually surveying the same field and reacting in countless ways, depending on what they see. Is it really too much to ask officials to have two kinds of penalty flags?

A friend indicated they actually liked this unneeded suspense. In other words, they have Stockholm syndrome. Perhaps the strongest argument against two flags is that officials like to confer after flags are thrown, so that they can come to a consensus about what they saw. That makes sense, but if one official sees defensive holding while the other sees offensive pass interference, wouldn’t it be most transparent to reveal that to the audience as it happens? Plus, just as in basketball, it’s still possible to update the call after conferring.

The time has come for football to move forward. Let’s stop pretending we can’t handle more than one kind of penalty flag. Let’s get crazy. Throw an iPhone in their back pocket. Maybe design an app for officials to link to the press box. In the time of Microsoft Surface™ — The Official Tablet of the NFL‎ — why does the NFL remain so dang loyal to sign language and lapel mikes?

By the way, that Harvin touchdown was called back. Sorry for not clarifying that earlier.