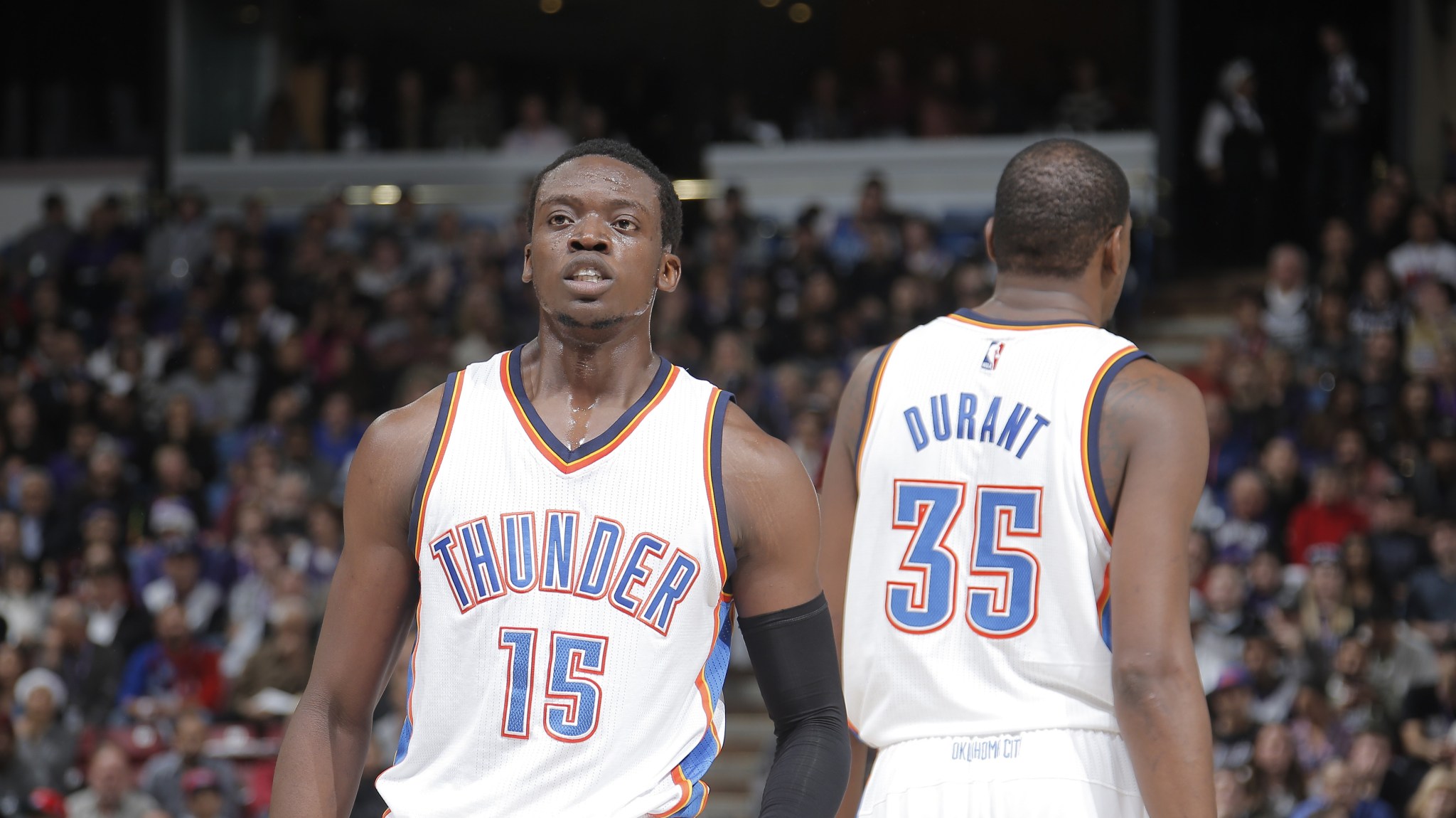 About two months ago, the Thunder were drowning and Reggie Jackson was trying to save them. He was one of nine healthy players on the roster, and one of maybe three who could actually score points in the NBA. He averaged 19.5 points, 7.5 assists, and 5.3 rebounds in November. “We have to tread water,” he told Yahoo at the time. “For us, it’s about getting into the playoffs now. The seeding doesn’t matter. If we can get to the playoffs, we’ll be better for this.”

On Friday, with Kevin Durant and Russell Westbrook back healthy and Dion Waiters added to the fold, Jackson was benched for most of the fourth quarter against the Jazz. He was asked whether he was surprised to sit the fourth quarter. “Nah,” he said. Then he paused and smiled to himself. “Not at all.” And added, “In due time.”

Contract talks between Jackson and the Thunder broke down last summer, which means he’ll be a free agent this summer. He’s made it clear he wants to be somewhere where he can start. When he was playing well, in November, there were questions about where he might land this summer. But since Durant and Westbrook have come back, Jackson has been anywhere from average to awful, and almost never any better. Now the question is whether he fits on the Thunder anymore, and whether he would even fit anywhere else.

This is like a breakout contract year gone horribly wrong. His defense has been bad, he’s forcing up bad shots on offense, and he’s falling out of the rotation. He’s so clearly pressing. He’s the golfer who grips the club too tight and swings too hard. The drives are going everywhere but the fairway.

He’s gone from B-list Russell Westbrook to something like Jordan Crawford — a scorer who doesn’t play defense and doesn’t score well enough to stay on the floor. Would you pay $10 million to have that person run your team?

He sounds miserable in interviews and he somehow looks even worse on the court. It’s a horrible time to be sticking up for Reggie Jackson.

It’s also time to start wondering what the Thunder can do from here. That’s what Royce Young did yesterday on ESPN.com (“The Thunder’s Reggie Jackson problem”). OKC started this year with Jackson as one of the most intriguing assets in the NBA, but now we’re halfway through the year and it’s hard to imagine it can trade him for anything decent. If he becomes a restricted free agent this summer, the Thunder can either lose him for nothing or they can match another team’s offer and bring him back to a bench role he doesn’t want. 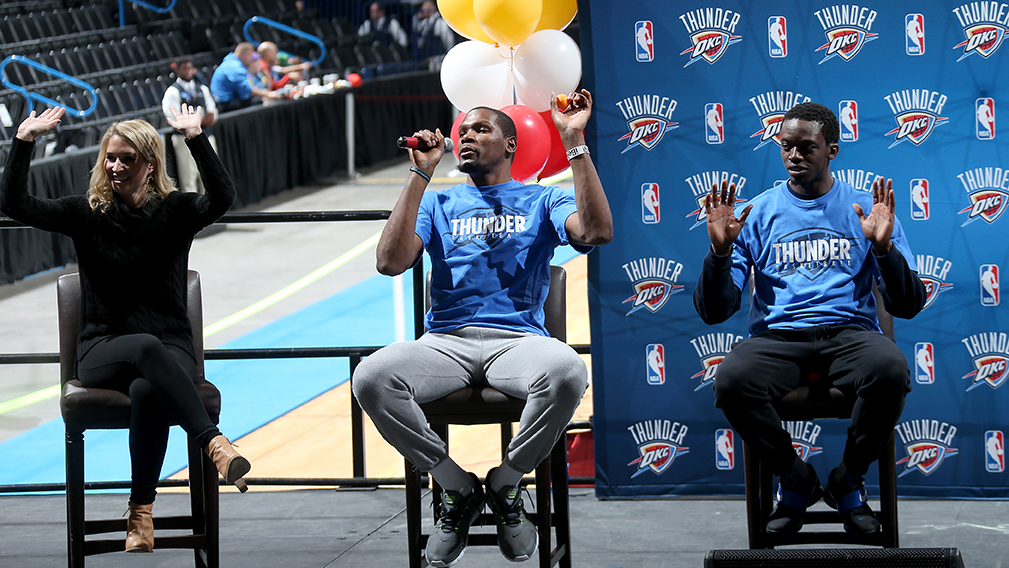 The knee-jerk reaction as a sports fan is to call this selfish, or at least shortsighted. He’d rather start on an average team than come off the bench for a title contender. He’s screwing with the Thunder by threatening their chemistry now and killing his trade value for later. Fans are turning on him, teammates are frustrated, he’s offering one-word answers to reporters. The Thunder definitely have a Reggie Jackson problem.

But I’m more interested in what happens with Jackson. I was talking to Jonathan Tjarks from RealGM about this last week, and he brought up a good point: This problem was inevitable.

Imagine an associate lawyer who works for a partner who’s a few years older and has the exact same specialties, only the partner is paid more and gets more opportunities to shine. The associate has a role drafting briefs and doing research, but never leads the closing arguments. Doesn’t the associate dream of leaving?

Now imagine the associate is stuck there for a certain amount of time, with no clear exit strategy. Isn’t it possible they would get insecure and start butting heads with coworkers? Overcompensating one day, checking out the next?

That’s what’s happening with Reggie Jackson as he sits behind Russell Westbrook. Fans and media are turning on him, teammates are getting tired of him, and he’s overcompensating for his insecurities by pressing even more. This situation is bringing out the worst in everyone.

With the Internet and constant discussions of rosters and salary caps in the Year-Round NBA, it becomes pretty easy to look at every player like a fixed asset that we all factor into future projections. Reggie Jackson is a reminder that these guys are human.

I’m not saying he’s a superstar in the making, but he’s much better than the guy who got benched against the Jazz on Friday. And if you’re wondering about his free-agent value, it’s worth remembering that throughout NBA history, the best free agents are usually younger players with plenty of talent who wound up in the wrong situation. Jackson definitely fits the second half of that sentence.

OKC’s front office didn’t want to pay him, but it also probably didn’t want to trade him this fall and risk living up to its reputation as the cheapest franchise in the NBA. But if what we’re seeing is the alternative to those options, maybe Presti should have made a deal. The situation has only gotten worse, and with Waiters onboard, Jackson is running the risk of heading into Jeremy Lamb no-man’s-land.

It’s crazy, but it shouldn’t be surprising. It’s also important to keep things in perspective as things devolve in OKC, Jackson becomes a target, and everyone wonders what will happen next. Reggie Jackson is struggling for all kinds of human reasons.

But humans bounce back too. Whether it’s in OKC or somewhere else, don’t be surprised if that happens to Reggie Jackson.