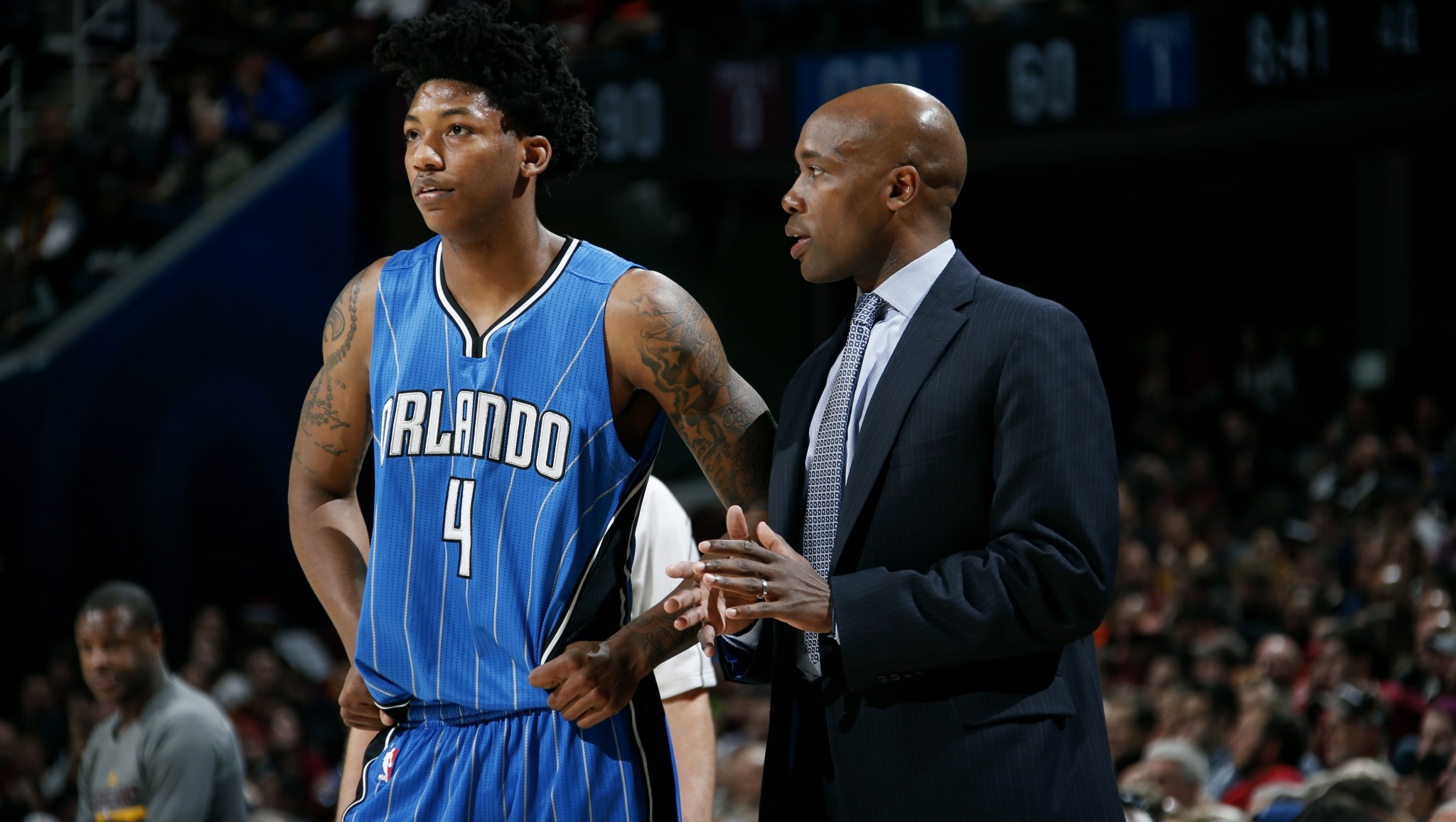 Fans and the national media basically ignore the Orlando Magic, but their bottom-up rebuild, in Year 3 now, is the subject of great interest among league insiders. No team has a larger curiosity gap between fans and front-office types.

Let me back up for a second. The Magic are an NBA team that plays in Orlando. They used to have Shaq, and Dwight Howard farted a lot in their locker room. They still exist today! Elfrid Payton is a rookie with goofy hair, and Kyle O’Quinn has the league’s most majestic beard. Evan Fournier, a French guy they got in exchange for Arron Afflalo, has some ratty ponytail contraption on his head.

They have a Montenegrin center, Nikola Vucevic, who averages 19 points and 11 rebounds per game on 53 percent shooting; police this week charged him with the murder of Pau Gasol.1 They wear splendid blue-and-black uniforms, sometimes with pinstripes. They have three lottery picks on rookie contracts and two fourth-year guys, Vucevic and Tobias Harris, with obvious lottery-level talent.

If you haven’t watched them yet this season, now might be a good time to start. Watching the Magic is like looking at a blurry painting: You can kind of make out what they are trying to be, and in the brief moments when everything comes together, it looks pretty. But sometimes the portrait just stays blurry, and sometimes — as in their embarrassing home loss to the Hornets two weeks ago — it looks like the artist barfed all over the canvas.

People have been waiting nearly three seasons for Orlando to develop a post-Howard identity. Its failure to do so, and the general lack of improvement in its win total, has stirred frustration with Jacque Vaughn; Rob Hennigan, the team’s GM, didn’t exactly endorse Vaughn as the long-term head coach in a “state of the team” interview with the Orlando Sentinel.

But something has coalesced over the last three weeks, even if the results have been all over the place. The Magic are trying to be a fast-paced spread pick-and-roll team, with three shooters spotting up around (mostly) Payton/Vucevic pick-and-rolls: 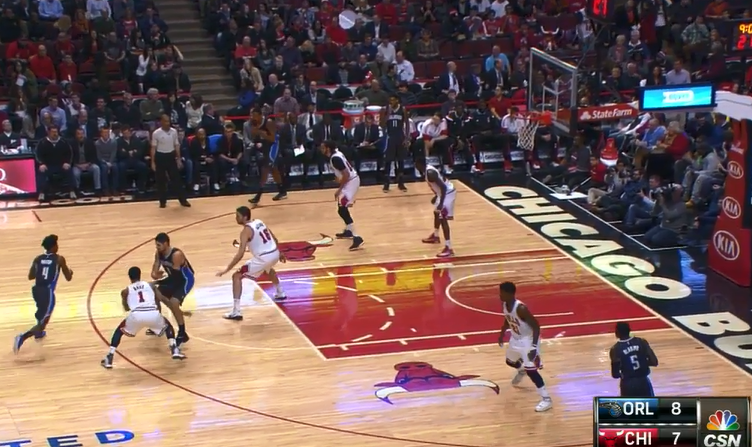 It’s a nice idea, but it’s a mystery whether the young Magic have the personnel to make this work. Orlando ranks just 28th in points per possession, and it has hovered around that sad level all season. All of its young guys have quirky skill sets that make for an awkward fit within this structure.

Payton can’t shoot, at all, from anywhere. He’s only 20, but he couldn’t shoot in college, and even Payton optimists see him topping out as a tolerable jump-shooter — not a good one. People wonder why Channing Frye, Orlando’s out-of-nowhere veteran signing last summer, hasn’t rained 3s at the level he did in Phoenix. The easy pick-and-pop looks don’t materialize when defenders can dip way under Frye’s picks for Payton, allowing Frye’s defender to stay home:

Defenders often treat Victor Oladipo the same way when he takes his turn at the wheel, even though Oladipo has improved his 3-point stroke in Year 2. And when Oladipo has the ball, that means Payton is off hiding on the perimeter — where nobody guards him. Harris has hit 41 percent from deep, but he was a bricky long-range shooter before this season, and defenses still treat him as such. Teams sag in from the wing against Orlando regardless of which guard has the ball, and it’s hard to score on the pick-and-roll against a clogged lane.

That also hurts Frye; even when his defender does abandon him on the pick-and-roll, the opposing defense rotates a third guy away from an Orlando wing player and into Frye’s grill:

Vucevic is a borderline All-Star, and he’s shooting 52 percent out of the pick-and-roll after struggling horribly on the play last season, per Synergy Sports. But he’s not an explosive lob dunker like Tyson Chandler and Andre Drummond. He doesn’t suck in quite as much attention on his cuts down the lane, which in turn creates fewer openings for the shooters around him. Vucevic subsists on floaters and midrange jumpers out of the pick-and-roll, and while he has a nice touch on those shots, they don’t compromise the integrity of a defense as much as you’d like.

While Vucevic has improved as a defender, he is still slow, and he struggles to protect the rim; opponents are shooting 55 percent on close shots when Vucevic is near both the hoop and the shooter, an ugly number, per SportVU tracking data. The problem got bad enough for Vaughn to start O’Quinn in Frye’s spot for a couple of weeks to slot a shot-blocker next to Vucevic. Problem: O’Quinn can’t shoot well enough to keep his defender from roaming into the paint, mucking up the central pick-and-roll action. Orlando has tried to make O’Quinn a 3-point shooter, but he’s 9-of-26 on the season.

The Vucevic/Frye combination doesn’t bring enough defense, but the O’Quinn/Vucevic combination hurts Orlando’s already shaky spacing. The team has tried Harris as a small-ball power forward, but with Frye around on a big four-year contract, there just aren’t as many minutes for Harris there anymore. Harris appears to have enough range and off-the-bounce juice to play small forward almost full-time now, but four years in, the Magic aren’t sure what his ideal position should be. That’s not a bad thing, by the way; Aaron Gordon, their injured first-round pick, brings a similar positional weirdness, and early in the season the Magic enjoyed creating some matchup havoc by playing Harris and Gordon together.

Molding this weirdo group into a Mike D’Antoni–style pick-and-roll machine is going to be tough. A lot of Orlando possessions just die after a couple of pick-and-rolls that go nowhere:

The best offenses never get stagnant like that. They keep cycling through stuff until something clicks or the shot clock demands that someone shoot. They have continuity. The Magic don’t really have that, and it’s convenient to lay that failing at Vaughn’s feet. But then you remember how young they are. Gordon is 19, Payton is 20, and Harris, Fournier, and Oladipo are all 22. Vucevic is just 24. Asking these guys to play Spurs- and Hawks-level offense is unfair. It took the Spurs years of refinement to become the machine they are today, and Mike Budenholzer, the Spurs alum putting his imprint on the Hawks, walked into a roster with heady veterans who carry a huge load. The Magic’s veterans beyond Frye are backup types who shouldn’t play all that much — Ben Gordon, Willie Green, Luke Ridnour.

But if Orlando can’t play this system, it is Vaughn’s job to craft a better alternative. I just haven’t heard any suggestions from the anti-Vaughn crowd about what that might be. The defense, the team’s supposed calling card, is a different story. The Magic have moved away from a conservative Bulls-style system in which the defense drops back and tries to push everything toward the sideline. Orlando has Frye coming out a bit more aggressively on the pick-and-roll lately, and, like the Raptors, they’ve been letting teams use picks and get into the middle of the floor. I’m not sure that’s the best bet here.

If something clicks, it will likely show itself over the next month, even though the Magic have a lot of tough games in that stretch. They’ve played a league-high 25 road games, so their schedule tilts homeward for the rest of the season. Orlando has been wretched at home, but that should turn at least a bit.

They also appear to have figured out some fundamental things about their rotation. Oladipo has actually played more minutes with Payton on the bench than alongside him, but that has flipped almost completely in the last month, per NBA.com. Orlando has concluded, at least for now, that Oladipo isn’t ready to be a lead ball handler. And while Vucevic isn’t a dunking pick-and-roll beast, he’s finding spots to roll into deep post-ups:

Vucevic is the crown jewel of the team’s rebuild so far — the prize in the Howard/Andrew Bynum deal. But he’s not good enough defensively to be a foundational star, and he’s best as a no. 2 or no. 3 option on offense. The lottery superstar, the dream of every teardown team, doesn’t appear to be here. Oladipo is going to be very good, but he almost certainly won’t ever be a top-10 or top-15 overall player. Gordon is a spastic mystery full of potential.

Frye does what he does — he’s shooting 39 percent on nearly six 3s per 36 minutes, even though it feels like he’s uninvolved — but remember: The Magic dealt away Ryan Anderson, a younger and better version of Frye, for basically nothing two and a half years ago. Anderson didn’t fit their defense-first ethos, and he can’t play backup center like Frye can. But Frye’s not out there doing any kind of prime Kevin Garnett impression.

Harris is a very nice player, and he has worked hard in a contract season on his half-court and transition defense — areas where he had been lazy before. Half the league will have max-level cap space this summer, and some team is coming with a mega-offer for him (hello, Knicks!). Executives around the league are divided on whether Orlando would match a high-end offer sheet, and the Magic are probably divided among themselves.

Payton is a keeper; whatever “it” is for point guards, he has “it.” But the ceiling for a total non-shooter can only be so high, and such players need the perfect ecosystem of spacing around them. The Magic also paid a huge price to get him after Philly cruelly selected Payton at no. 10 with the sole purpose of squeezing Orlando by the balls. The league knew Orlando coveted Payton, and the Magic flipped Philly the no. 12 pick (Dario Saric) and the Sixers’ 2017 first-rounder that the Magic had originally snagged in the Howard/Bynum deal.

The Magic wanted Payton that badly, and they might have been banking on two other things: Philly not being abysmal by the 2017 draft, and Orlando having enough young players and draft picks (including an extra 2017 first-rounder from the Lakers)2 that tossing one away wouldn’t hurt so much.

That’s the other bit of good news here: The cap is set to skyrocket in 2016-17, and that should allow the Magic to maintain decent cap flexibility even if they go nuts on new deals for Harris this summer and Oladipo later. Things could get dicey if Oladipo plays his way into a max contract right when the cap leaps, and the Magic will eventually cap themselves out if all of their players now on rookie deals crack eight figures on their second NBA contracts.

Those deals would be staggered so the Magic could add a veteran or two via cap room in the meantime, and contracts are so short now that guys will always be flying off and on the books.

I’m not sure what the Magic have here — in their players, or in Vaughn, who declined a request for comment. No one is. But the next month or two will tell us something and perhaps determine whether Vaughn is the coach there next season.