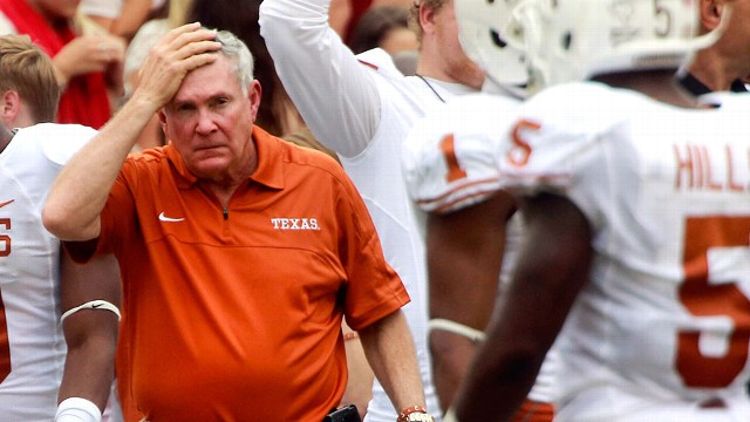 So you want to fire your college football coach.

I understand! My coach just showed up at the Cotton Bowl with a team that looked like it had graduated from the Wade Phillips School of Game Planning and the Jason Garrett Institute for Workplace Motivation. Happily, college football is one of the few sports where outraged fans can directly affect the course of history. But the way fans rage at their coach has changed.

I start in ’97 only because it was my first truly awful season of college football. The Texas Longhorns, who had Ricky Williams in the backfield, lost a home game to UCLA by 63 points. (I challenge even those Texas fans at the Cotton Bowl on Saturday to find a more soul-crushing afternoon than “Rout 66.”) Two weeks later, when we played Rice, an airplane flew overhead.

It dragged a sign behind it that said “Dump DeLoss and Flush the John.” DeLoss Dodds was (and is) the UT athletic director; “John” was the coach, John Mackovic. The airplane got a lot of press, with articles as far away as the Omaha World-Herald. Mackovic, who won four games in ’97, was fired at the end of the season.

If this act of defiance sounds kind of lame, it’s because the Rent-a-Plane Era was a sad time. Fans had few public ways to express their rage. You could also call this period the Print-a-Flier Era. One morning, we awoke to find the Texas campus littered with these.

It was also the Write-a-Letter-to-the-Paper Era. “Why is the Texas football team going to change its mascot from the Longhorn to the Possum?” Ronald and Yogi McKelvey wrote to the Austin American-Statesman in 1997. “Because they play dead at home and get killed on the road.” Retweet!

In 2002, a group of Florida frat boys with knowledge of the “Internet” created the site FireRonZook.com. It created a brief sensation among national college-football writers. There’s a whole website devoted to firing Ron Zook!

This became a big deal because (a) few understood that creating a website was something that could be accomplished for 30 bucks, (b) the trick could be replicated in every conference — i.e., FireGaryCrowton.com, and (c) it fulfilled the sportswriterly mandate to find Evidence of an Enraged Fan Base. The website became the digital airplane sign.

We might also add that (d) Florida fired Ron Zook in 2004, which made it seem like FireRonZook brought about his demise. (Zook took care of most of that himself.)

Eventually, sportswriters got tech-literate and the bubble burst. The few fire-the-coach sites that still exist look as curiously anachronistic as Thomas Nast cartoons. The owner of FireGeorgeOLeary.com invites you to “Make [an] Offer.”

By this point, a great many college fans had moved their rage online. And their ramshackle message boards and Usenet groups had been replaced by the millions of networks run by Rivals and Scout. Now, if you wanted the coach fired — in his first, second, or 15th season — you wrote an angry post.

Glancing at my Rivals site this morning — and, remember, this is three days after the OU game — I find the following subject lines:

The Write-a-Post Era was notable for several innovations: posting news that injured players had been seen in walking boots, linking to arrest reports from local police departments, and teaching college football fans how to use flight-tracking software.

Now, obviously this is a rough history. I still subscribe to a Rivals site. The odd airplane still circles above college stadiums (and Arrowhead Stadium). But I think we’ve half-moved into a more interesting period of fan rage.

The best thing written about Mack Brown this week was by the pseudonymous “Scipio Tex,” who writes for a site called Barking Carnival. You can find Scipio’s essay — and that’s the right word for it — here. The essay is 1,700 words long, beautifully written, and meta in its take on the entire genre of fire-the-coach articles. (“When you write a piece like this, you then deftly transition to the latest calamity, the final straw that means there must be changes, because this is a business, not a charity …”) Scipio’s piece is worth about a thousand Rivals posts.

This is the new way to get your coach fired on the Internet. It’s eloquent rage. A persuasive case that uses words and numbers and comes to a conclusion like “Mack Brown is a pretty good guy failing at his job.”

That such a slogan wouldn’t fly on an airplane banner or on FireMackBrown.com is probably what makes it more persuasive. It feels weird to say this about college football, but coach rage has almost become something beautiful.

Filed Under: Bryan Curtis, College Football, Oklahoma, The U