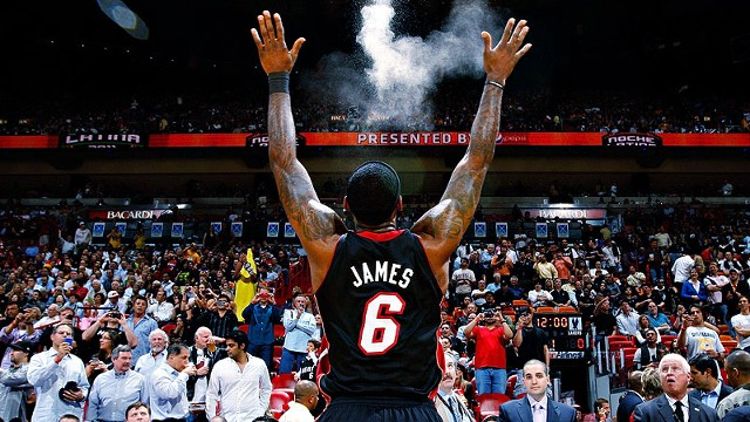 The NBA is back at its fun police routine, with a new regulation that will require starters to be on the court within 90 seconds after the end of lineup introductions. A pouty Kevin Durant told the Oklahoman the rule will force the Thunder to cut down its apparently quite elaborate pregame handshake/dance/whatever routine:

“I personally don’t like it,” Durant said of the 90-second rule. “Every player in this league has routines they do with their teammates, rituals they do before the game and before they walk on the floor. The fans like it. The fans enjoy it. You see the fans mimicking the guys who do their stuff before the game. To cut that down really don’t make no sense. Why would you do it? I really don’t agree with it, but I don’t make the rules.”

On the surface, this is stupid. When you dig deeper, it still is. But the NBA isn’t simply targeting those goofy pieces of pregame choreography everyone loves (I’m still a sucker for the ’90s-era Pacers jig). The league actually began cracking down last season on lollygagging after timeouts by sounding warning horns indicating it was time for play to resume. A league spokesman told Grantland today that the new pregame rule will work the same way: A 90-second clock will begin ticking when intros are over, with a warning horn sounding when there are just 30 seconds to go. The league has also instructed referees to alert players at the 30-second mark. Failure to be ready by the buzzer results in a delay-of-game warning.

The league is right that games take too long. And if the league continues to expand replay review to goaltends, out-of-bounds plays, and flagrant foul calls, they have to shave off that time somewhere, so that games don’t routinely approach three hours. This particular crackdown on fun helps in that regard.

But it’s all just tweaking on the fringes. There are only a few meaningful ways to make NBA games shorter, if the league is indeed interested in doing so:

Eliminate One TV Timeout Per Half

The mandatory under-9:00 timeout in the second and fourth quarters is the single worst thing about the league — worse than Vinny Del Negro screaming at opposing shooters; worse than Jordan Crawford’s shot selection; worse than Carlos Boozer receiving an All-Defensive team vote last season; worse than Kobe Bryant’s cartoonish jaw-jut; worse than the general experience of watching Tyler Hansbrough play; and worse than Rasheed Wallace’s current level of conditioning. It interrupts the game just when it has gotten started again, and the fact that the league hasn’t squeezed it into all four quarters is in some way a recognition of how disruptive it is.

The stock response will be that more TV timeouts create more commercials, and the ability of the league’s broadcast partners to sell commercial is the reason those networks pay nearly $1 billion every year — nearly one-quarter of the league’s gross revenues — for the right to broadcast NBA games. The rights fee figures to jump by at least a few hundred million per year once the current broadcast deal expires after 2015-16. The league wouldn’t jeopardize that cash cow by cutting the ability of companies to advertise during games, right? Maybe. We’ll come back to this.

Henry Abbott of ESPN.com’s TrueHoop blog crowd-sourced this problem early last season and came up with a bunch of really good ideas, including a rule change that would allow teams with a small late-game lead to decline free throws upon an intentional foul from the trailing team in favor of simply taking the ball out of bounds again. That might be a tough sell, Abbott wrote, since it would make it much harder for teams to rally in the last 30 seconds or so.

Lots of Abbott’s readers suggested limiting the number of timeouts teams can call in the last minute or two of games. Several experts pointed out that FIBA rules eliminate most late-game stoppages by restricting circumstances in which coaches can call timeouts or even make substitutions. Why not just adopt those rules?

Doing so would obviously touch on the same television issue, since so many of those late-game timeouts allow for a quick commercial or two. But there would appear to be a middle ground here somewhere. The length of NBA crunch time has been a punchline for decades now; the days of pointing to the game clock and telling your wife or girlfriend the game will be over “in just two minutes” ended before most us could really try that trick out.

Why do NBA games have to be 48 minutes? Games played under FIBA rules, including at the Olympics, last only 40 minutes. Those games clocked in at a delightfully brisk 90 minutes in real time, though they featured far fewer in-game commercial interruptions than would ever be possible in the NBA. Still: Think about how much more time we’d all have if we could budget a clean two hours for a live NBA game.

Another bonus of shorter games: The outcomes are slightly more random. The longer a game, the greater chance the better team wins. More time and more possessions give superior talent more opportunities to overcome cold streaks, hot streaks, bad luck, a quirky game plan, and whatever other variables might help out an underdog. The NBA would probably be more popular if it were a bit less predictable, both in the regular season and the playoffs. As Kevin Arnovitz of ESPN.com has noted, the NCAA sells the broadcast rights for a three-week tournament for nearly as large an annual fee as the NBA gets from an entire season of games. The inherent unpredictability of the NCAA’s one-and-done format and the resulting scarcity of games are the driving forces behind the wild popularity of the tournament — and of its sky-high broadcast fees.

The NBA should stay away from one-and-done postseason models, though there are people around the league who think it should be at least up for discussion at some point. A multi-game playoff series makes it more likely the “best” team will win, and it feels right when the “best” team — or one of the two or three best — is holding the trophy at the end of the season. Of course, only a super-long series — best of 29, anyone? — would really ensure the better team wins nearly all the time, and nobody wants that. The best-of-seven format allows for some randomness, though not nearly as much as exists in almost every other professional sport.

If best-of-seven is sacred, why not explore other ways to inject a bit of unpredictability into the NBA? Reducing game length would be one means of doing that and shortening game time all at once. This isn’t completely far-fetched. I’ve talked to several high-ranking executives who would favor cutting game length, and the NBA and FIBA have discussed unifying basketball rules across the board. The latter has already adopted the NBA’s lane shape, ditching the beloved trapezoid, and the NBA is discussing at some point implementing the FIBA rule allowing players to swat at the ball while it’s on the rim. (The D-League already allows for this.) Why not go to 40 minutes?

This is especially worth discussing if the change would not impact the value of the league’s television deal. The economics aren’t clear, just as they aren’t clear when it comes to the impact of a shorter overall schedule. What is clear: Games are too long, and cutting pregame dance routines isn’t going to move the needle on that issue.