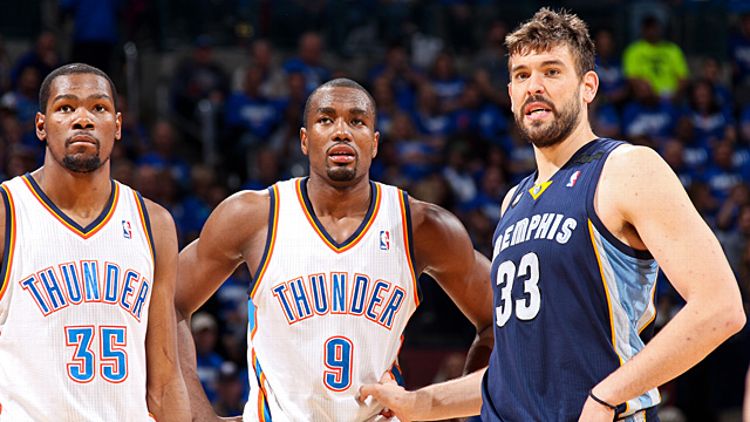 If the first two games were any indication, the second-round series between the Oklahoma City Thunder and Memphis Grizzlies is going to be decided by the slimmest of margins. A mere eight points is all that has separated the two squads as they head to the River City, and between two evenly matched sides, any advantage, no matter how minuscule, could prove to be the deciding factor. It’s with this in mind that a four-minute stretch from Game 2’s second quarter might say a lot about Oklahoma City’s chances.

In the absence of Russell Westbrook, Oklahoma City can no longer overcome its role players’ offensive deficiencies with the sheer firepower of two superstars. To come anywhere close to the incredibly efficient offense they were in the regular season, the Thunder now need space and shooters around Kevin Durant. Against Houston, a team with exactly one effective big man (Omer Asik), this was easily accomplished without exposing the Thunder to mismatch problems inside.

The Grizzlies duo of Marc Gasol and Zach Randolph bring a different challenge. They make it much more difficult for the Thunder to both field these smaller lineups and match up with the Memphis front line. In two games, Thunder coach Scott Brooks has chosen to match the Grizzlies behemoths with his own, but this has meant giving a staggering number of minutes to two players, Kendrick Perkins and Hasheem Thabeet, who should be relative afterthoughts.

With Westbrook, this obvious approach might be enough. Oklahoma City would have both the scoring and the frontcourt defense it needed to combat the Grizzlies. But with Westbrook out, the dynamics have changed. The Thunder are no longer the favorites and no longer have the upper hand when standing pat. After Memphis’s convincing win to even the series, it might be time for Brooks to consider going with a riskier, higher-variance approach, like the one he used early in the second quarter in Game 2.

Brooks went to a “small” lineup by inserting Durant at the 4 to attack a slimmed-down Grizzlies front line that featured Ed Davis and Randolph. It was a smart move to pull the unskilled and ineffective Thabeet in order to field a lineup with Serge Ibaka, Durant — who could check the slender Davis without a problem — and three other perimeter players: Derek Fisher, Thabo Sefolosha, and Kevin Martin. But less than a minute after Durant entered the game, Lionel Hollins put some pressure on Brooks.

The Memphis head coach pulled Davis in favor of Gasol and forced Brooks to either put in another big man or make Durant defend one of the Grizzlies’ bears. Brooks resisted the urge to pull out one of his smaller perimeter players for Thabeet or Perkins. He instead opted to let things ride with Durant on Gasol. For the next few minutes, it created a scenario NBA fans should want to see (particularly if they love offense) — two teams playing to their strengths with effective but wholly different styles and personnel. It was a stretch that the Thunder will certainly need to revisit as they prepare for a pivotal Game 3 Saturday night. There were enough positives during that stretch to consider it a potential advantage — albeit a precarious one — for the team going forward.

By spreading the floor and forcing either Randolph or Gasol to guard out on the perimeter, Oklahoma City gains an obvious edge when on offense. Randolph in particular is like a fish out of water when forced to track a wing on the perimeter. The Thunder exploited this on nearly every possession of that stretch by using the man he was guarding (Sefolosha) as either a screener or a ball handler to create wide-open looks from 3.

Without Perkins or Thabeet in the game, Randolph (or Gasol) is put in the unfamiliar position of having to step up to stop dribble penetration then recover to a shooter outside the arc. Here is a simple drive-and-kick that ends in another Fisher 3 (seriously, what is with that guy?), thanks in part to Randolph’s positioning and recovery.

The common theme in those clips, and the other possessions during that stretch, was that they ended in dunks or made 3s, the latter of which is what makes this such an unpredictable strategy. If Fisher or any of the other Thunder shooters fail to convert shots while Gasol and Randolph get high-percentage looks at the rim on the other end, the Grizzlies could extend or erase leads rather quickly while also exacting a physical toll on Durant.

There are ways that Oklahoma City can look to limit those looks as the Grizzlies attack Durant on the post. The first is having Durant, and even the other Thunder big man on the floor with him, front every direct post-up, similar to this action after a baseline out-of-bounds in which Durant quickly fronts Gasol after a cross-screen. Durant eventually plays straight up behind Gasol due to the shot clock (if he got overly aggressive in fronting, it could leave open a lob to the rim with time winding down), but the general idea of fronting is the correct strategy when dealing with normal post-up sets like this.

Because of the diversity in Memphis’s offensive scheme, there will be situations in which it will be difficult for Durant to front. In this case, Mike Conley called for a pick-and-roll with the weakside corner filled to get Gasol deep post positioning. Durant has to hedge on Conley here before sprinting back to battle the bigger Gasol, a scenario that makes fronting impossible.

In these situations, along with fronting, Brooks will need to direct his help defenders to brazenly ignore the Memphis wings spotting up on the perimeter — something they should very easily be able to do when Tony Allen is on the floor. The Thunder help defenders must either dissuade a lob pass over a top from the weak side or, as in the clip above, pick up Gasol or Randolph early in their roll to avoid letting them anchor right in front of the rim. This may lead to open 3s from the corners — a no-no in most situations, but an ideal result if that shooter is Allen.

The look that the Thunder will have to deal with most, however, is Memphis getting a high-low look out of roll-replace action after a pick-and-roll. In this situation, Durant’s big man sets the screen on the ball and dives to the rim — while looking for deep post position much like in the clip above — as the opposite big (in this case Randolph) stays high to deliver an entry pass to a teammate set up deep in the paint.

Though this looks like an easy way to exploit the size mismatch with Durant, it’s easily nullified by what’s called a “stay high” coverage, which is executed exactly like it sounds. So instead of Durant hedging and recovering to the rolling Gasol in the previous clip, his frontcourt mate Ibaka, originally assigned to Randolph, would switch onto Gasol while Durant would recover back “high” to Randolph. Oklahoma City actually used the coverage later in the game on a similar play, but it was when Ibaka and Perkins were in the frontcourt together. In this case, it’s Ibaka staying high on Gasol after hedging on a Randolph screen.

Now, just because there are ways for the Thunder to counteract their opponents’ size advantage in this situation doesn’t mean this is a lineup they can use for huge chunks of the game. Too much time battling either Gasol or Randolph will wear an already overextended Durant down even further. But for 10-15 minutes a night, especially late in games when they are behind, this is a lineup the Thunder could rely on to generate points in a hurry, and it might even force Hollins to pull one of his star big men if the Grizzlies are unable to keep up. In a series where any slight advantage could turn the tide, the Thunder may have to go small or go home.