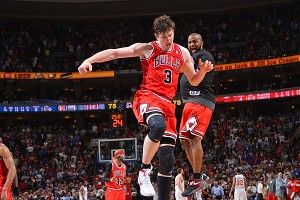 I got the news of Omer Asik’s offer from the Rockets in an e-mail from a friend. The gist was that Omer, a restricted free agent, was getting paiddddddddddddddddddd — and to be clear, that’s “paid” with 19 d‘s. First reported by Yahoo!’s Adrian Wojnarowski, the Houston Rockets and Asik verbally agreed to an offer sheet of three years and about $25 million (Asik can’t sign the deal till July 11; the Bulls will have three days to match it), and as would be expected, the quick jokes followed. Instead of Dwight Howard, Houston’s new starting center could be a guy who scored 3.1 points a game last year. As someone who’s seen most of Asik’s 169 career games, the comedy was lost on me. In a world in which DeAndre Jordan makes $10 million a season, Daryl Morey was giving $8 million a year to one of the league’s best post defenders. Then I saw what he actually did.

I’d resigned myself to the end of Asik’s time in Chicago before I even knew all the details. Eight million dollars a year is a hefty price for a backup center. In two years, the Bulls would be near the luxury tax threshold with only five contracts, and by the time the 2014-15 season rolled around, even if Luol Deng were to come off the books, Chicago would have $38 million tied up in three frontcourt players (Carlos Boozer, $16.8 million; Joakim Noah, $13.15 million) if they were to keep Asik. That number doesn’t include Taj Gibson, whose deal the Bulls can begin to renegotiate this summer.

The real problem for the Bulls is that Houston GM Daryl Morey is an evil mastermind. Thanks to a loophole in the new CBA, Chicago wouldn’t owe Asik an even $8 million a year over the three-year deal. As laid out by John Hollinger, there’s a provision that limits the amount of money a player like Asik (a restricted free agent with one or two seasons in the league) can be paid in the first two years of a new contract. In years one and two, Asik can make the maximum of the mid-level exception (around $5 million), but in year three, Houston can offer him any amount up to the maximum salary.

The way Asik’s contract offer from Houston is structured, that would mean a price tag of about $14 million in 2014-15. The catch is in how the deal is paid out differently by the team making the offer and the team having to match it (the Bulls). For Houston, Asik’s cap hit each year would be the total money evenly split over three seasons. For the Bulls, it would mean having to pay that $14 million in the final year, a figure that would put them way over the luxury tax threshold right when the tax penalties are slated to become even more severe for repeat payers. That difference in $6 million makes matching the Rockets’ offer go from irresponsible to nearly impossible.

Credit goes to Morey for having the ingenuity to exploit the hole in the new system. The follow-up question is whether it was worth it. Asik’s reputation as an excellent defender is well earned. The Bulls’ second unit (ideally C.J. Watson, Ronnie Brewer, Deng, Gibson, and Asik) is one of the best defensive units, if not the best, in basketball. Gibson and Asik both have the quickness to step out on screen-and-rolls, and Asik is an excellent defender near the rim. The defensive rebounding numbers round out his status as an elite defender — a 25.1 percent defensive rebound rate and 8.3 defensive rebounds per 36 minutes in 2011-12.

There’s no way around the fact that Asik might be the most unskilled offensive player in the league. Even turning basic interior passes into dunks is no sure thing, and his free throw shooting is next to terrible. The one bright spot is that he makes up for those lost possessions by creating new ones. Extrapolated over an entire season, his 14.9 percent offensive rebound rate would’ve been the league’s second best. Just like it shouldn’t be on defense, the value of offense rebounding can’t be discounted in a player’s total value on that end of the floor.

The Rockets have done everything they can in this situation to minimize their own risk while ensuring they bring Asik to town. At $8 million a year for only three years, the damage is limited if Asik does turn out to be a total flop, and more than likely, Houston is getting an elite defensive center who is athletic enough to thrive in the type of game we saw in this year’s Finals. Bulls fans are going to miss ya, Omer, and even if it’s just for chances like this.