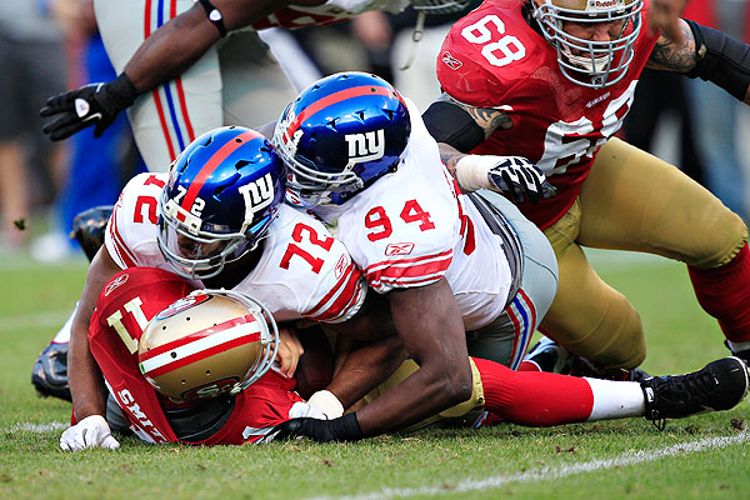 For those who reside outside New York’s tristate area, I’d imagine Sunday’s NFC championship game was a pretty unsatisfying affair. When the most notable player in a game is a guy who muffed two punts and Alex Smith is busy being Alex Smith-y, nobody is having fun. Well, almost nobody.

For defensive-line junkies like me, Sunday night was quite the fix.

While any debate over the league’s MVP this year was pretty short, the conversation about the top defensive player in football included far more names. Two of those candidates — Jason Pierre-Paul and Justin Smith — did plenty Sunday to show why they deserved that sort of credit all year.

My favorite part of the NFL playoffs has nothing to do with increased stakes or a heightened level of play. For me, the playoffs are a chance to actually watch football again. I usually spend Sundays in sports bars, shifting attention from screen to screen, unable to appreciate the individual battles of the game. When Julius Peppers is on the field, I don’t bother watching the ball, and with the defensive-line play on display last night, watching Smith one-hop another ball to Michael Crabtree was pretty far down the list of priorities.

The praise for Pierre-Paul has come from just about everyone for most of this season, and it’s usually taken on the same narrative: If he ever harnessed all that talent, watch out. The truth is that while the sacks are what make the night’s highlights, it’s taken just two seasons for JPP to become one of the best (if not the best) all-around defensive ends in football. It takes time to adjust to the position at the pro level. Players could rely on simple athleticism in college, but nuance is required in the NFL. Pierre-Paul’s ability to develop those elements of his game is the most impressive part of his rise.

Against the Niners, Pierre-Paul, who finished the regular season with 16.5 sacks, repeatedly showed why he presents problems for opposing run games. To go along with the quickness to run plays down from the backside, Pierre-Paul has the rare quality of being an elite pass rusher that plays with the discipline and leverage to anchor a rush defense on the play side as well. The former was on display several times, including dropping Frank Gore two yards deep in the backfield on the first possession of overtime.

Pierre-Paul’s recognition and on-field success came all at once this year, but Justin Smith’s have been years apart. The former Bengal signed a six-year, $45 million deal with the 49ers in 2008, and has been worth every cent in the seasons since. But only this year, with the resurgence in San Francisco, has he gotten the due he’s truly deserved.

His own production would be enough to show just how great he’s been all season, but the numbers of the two star linebackers behind him only further solidify his importance to one of the league’s best defenses. On most plays Sunday, the Giants threw two blockers at Smith in both pass and run situations, freeing up the guys in the middle to completely shut down any hope of getting something going on the ground.

While JPP relies more on silly closing speed, Smith’s ridiculous strength is what sets him apart. Twice in the past two weeks, Smith put an opposing left tackle into the lap of the quarterback and needed just one hand to drag the latter down for the sack.

In a sloppy game on a sloppy field, there wasn’t much that could salvage a night in which a team one possession from the Super Bowl converted its first third down on the final play of regulation. This late in the year, I wouldn’t figure that hand-fighting and gap integrity would be needed to save an unwatchable game, but this time, they were, and — just like they have all year — Pierre-Paul and Smith came through for defensive-line junkies everywhere.