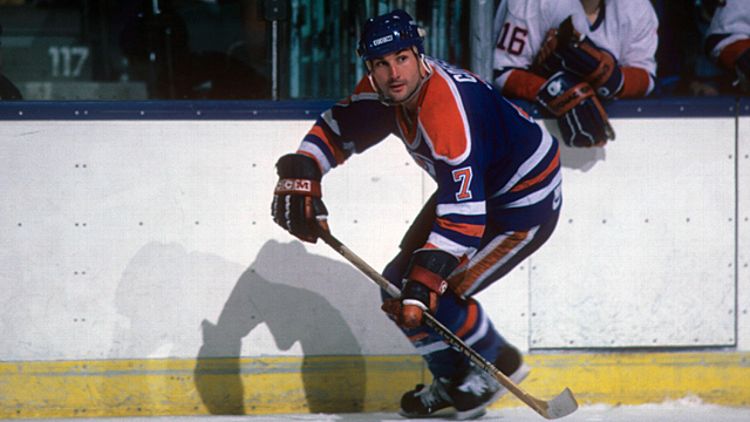 Four weeks into the NHL season, several teams are off to great starts. The Sharks and Avalanche have been virtually unbeatable, and the Lightning, Ducks, and Maple Leafs have also had an impressive opening month. At the other end of the spectrum, teams like the Sabres, Flyers, and Oilers are off to the kind of starts that can torpedo a team’s playoff hopes before the calendar even flips over to November.

Nothing has been as extreme as what happened last year, when the Blackhawks made it to the second half of the lockout-shortened season before suffering a regulation loss. They shattered the NHL record with their 21-0-3 start, coasted to the Presidents’ Trophy, and went on to win the Stanley Cup.

Of course, not every early-season streak — good or bad — will lead to such a predictable ending. So let’s see if we can learn anything about what to expect by looking back at five of the greatest starts in NHL history, along with five of the worst.

The Oilers were the defending champs entering the season, having finally ended the New York Islanders’ run of four straight Cups. If the rest of the league had any hopes of an Edmonton letdown, they were doused quickly by a 15-game unbeaten streak.

How they finished: The Oilers finished with 109 points, which was actually second in the league to Philadelphia’s 113. But they ran the table with relative ease in the playoffs, cruising through the Campbell Conference before beating the Flyers in five to win their second consecutive Cup.

By the way, this team featured a 208-point season from Wayne Gretzky, 71 goals by Jari Kurri, and 37 goals and 121 points from Paul Coffey, who was a defenseman. The ’80s were a crazy, fun decade.

The Rangers lost their first 11 games and didn’t get a win until mid-December. That actually kicked off a stretch of four wins in five games, perhaps affording some small degree of hope heading into the new year. That was immediately followed by another seven consecutive losses. The 1943-44 Rangers were horrible.

How they finished: The Rangers didn’t get much better. Their record stood at a pathetic 6-39-5 through 50 games, which was especially problematic given that back then the season was only 50 games long. Their 17 points were easily the low point in franchise history, and earned the 1943-44 Rangers a permanent spot on just about every “all-time worst teams in pro sports history” list.

The season’s rock bottom came in a 15-0 loss to the Red Wings on January 23, 1944, which still stands as the biggest blowout in the history of the league. That kicked off a 21-game winless streak to end the season. Yes, the Rangers actually finished the season even worse than they started it. They were that bad.

For all its historic futility, New York’s nightmare season does come with a significant asterisk: The roster had been decimated by World War II, with 10 Rangers leaving to join the armed forces.

The 1992-93 Leafs had delivered a memorable playoff run that fell one game short of a trip to the final and resurrected the franchise from the ashes of the Harold Ballard years. The 1993-94 team continued that momentum, setting an NHL record by starting the season with 10 consecutive wins and creating the only instance in the past 45 years when the Leafs could have legitimately been called the odds-on Cup favorite.

On a personal note, this streak was part of what was almost undoubtedly the greatest few weeks in Toronto sports history, as it coincided with the Blue Jays winning their second consecutive World Series. In fact, the Leafs’ record-setting ninth win came on the same night as Joe Carter’s infamous home run. Tens of thousands of sports fans flooded the streets of downtown Toronto that night to celebrate. Some may even have been aware that there’d been a baseball game.

How they finished: Once the streak ended with a 5-2 loss in Montreal, the Leafs were barely a .500 team the rest of the way. They finished 43-29-12 and made it back to the conference finals before bowing out in five games to the Canucks.

Side note: The 2006-07 Sabres tied the Leafs’ record of 10 consecutive wins to start a season, but nobody acknowledges it because the shootout ruins everything.

It seems fitting to group these two teams together, if only to illustrate how comically bad NHL expansion teams were allowed to be in the 1990s. (The Senators were in their inaugural season, while the Sharks were entering Year 2.)

Both teams opened their season with a win, then went on massive losing streaks. San Jose lost nine straight before putting together a modest three-game unbeaten streak. Ottawa was even worse; it lost nine straight, managed a tie, and then lost 11 more.

How they finished: This would be a great spot for an inspiring story about how one or both of these scrappy underdog teams pulled together to salvage their season. Unfortunately, we’re stuck with reality.

The Senators were a historically bad team. They finished 10-70-4 and are probably best remembered for going almost an entire season without a road win (they finally got their first in mid-April). The Sharks were just as bad, finishing 11-71-2. That early-season nine-game losing streak was actually just their fourth-worst stretch of the season — they also had a pair of 13-gamers to go with a 17-game streak. The latter included a 13-1 loss at the hands of the Calgary Flames, who’ve presumably been paying a heavy karma tax ever since.

But hey, at least these excruciatingly awful teams got the top two picks in the 1993 draft, whose top-rated defenseman was future league MVP Chris Pronger. Of course, neither picked him. The Senators used the top pick on Alexandre Daigle, and the Sharks traded down from the no. 2 spot so they could choose Viktor Kozlov.

At the same time the 2006-07 Sabres were compiling their (once again, completely illegitimate and discredited) 10-0-0 start, the Ducks were off to a hot start of their own. Powered by Teemu Selanne and the defensive dream team of Pronger and Scott Niedermayer, their 16-game point streak to start a season set an NHL record that stood until it was broken by last year’s Blackhawks.

How they finished: The Ducks cooled somewhat, finishing the season with a 36-20-10 record over the final 66 games. That still gave them 110 points on the season, enough to secure the second seed in the West. They then rolled through the playoffs, losing just five games and never facing elimination on the way to the franchise’s first Stanley Cup.

The Oilers couldn’t have enjoyed the start to their 1990-91 season, but they probably weren’t panicking. After all, it was only slightly worse than the 5-8-4 start they endured the year before, and that had included star forward Jimmy Carson demanding a trade, and starting goalie Grant Fuhr having an appendectomy. They had still recovered from all that to go on to post the second-best record in the conference and win their fifth Stanley Cup in seven years.

How they finished: The Oilers are one of the few teams to suffer through a terrible start and still recover. In 1990-91, that meant going 35-26-4 the rest of the way to finish the year at an even .500. They then upset both the heavily favored Flames and Gretzky’s Kings on their way to the conference finals, before falling victim to the Cinderella run of the Minnesota North Stars.

This year marked the end of the Edmonton dynasty, as mainstays like Fuhr, Mark Messier, and Glenn Anderson would all be traded before the next season opener. The Oilers would make one more trip to the conference finals in 1992, then miss the playoffs for four consecutive years.

The Penguins started the lockout-shortened 1994-95 season without Mario Lemieux, who would sit out the entire year as he battled Hodgkin’s lymphoma. But they still went undefeated through 13 games behind a scary offense that featured future Hall of Famers Jaromir Jagr, Ron Francis, Luc Robitaille, and Larry Murphy.

How they finished: After their hot start, the Penguins were barely a .500 team the rest of the way. They went just 17-16-2 and slipped to the third seed in the East. They edged the Capitals in a seven-game first-round series, then lost to the eventual champion New Jersey Devils in Round 2.

How they finished: The Kings improved only marginally as the season went on and finished 20-49-9, good for the second-worst record in the league.

To make matters worse, the Kings couldn’t even look forward to a high draft pick, since they’d traded their 1972 first-rounder to the Canadiens four years earlier. This was a bit of a habit for Kings GM Larry Regan back then — he traded away every first-round pick from 1969 to 1974 for veteran help, often several years in advance.

In case you were wondering, the Habs used the Kings’ pick to choose Steve Shutt, who was inducted into the Hockey Hall of Fame in 1993.

A year after making a run to the Stanley Cup final, the Senators spent the first month and a half of the season absolutely crushing the league. A loss to the Hurricanes was the only blemish through the season’s first 14 games, leading hockey fans to wonder if they should just go ahead and engrave the Cup now to save everyone the trouble.

How they finished: On November 19, the Senators were 16-3-0. Two nights later, they began a seven-game losing streak. That still left them at a very respectable 16-7-3, and they followed that with a six-game winning streak. As late as January 12, the Senators sat at 29-10-4, and coach John Paddock was appointed to the Eastern Conference All-Star team.

But the Senators won just seven of their next 21 games, and before February was over, Paddock was fired. It was a stunning collapse, one that almost cost the team a playoff spot. They ended up sneaking in by just two points, then were swept in the first round.

I don’t want to talk about it.

How they finished: I really don’t want to talk about it.

This was easily the low point of Toronto’s Brian Burke era. The Leafs entered the season with the expectation that they’d make the playoffs for the first time since 2004, which seems odd in hindsight, considering their goalies were Jonas Gustavsson and Vesa Toskala. Needless to say, Toronto never recovered from its awful start. The Leafs finished 30-38-14, last in the East and the second-worst record in the league.

What’s worse, they didn’t even own their own first-round pick. Burke had sent that to Boston in the Phil Kessel trade, allowing the Bruins to pick blue-chip prospect Tyler Seguin. So long-suffering Leafs fans, who had spent years begging for the team to either become a contender or bottom out and draft a franchise player, finally got to see the latter option, minus the draft part.

I honestly don’t want to talk about it.