House of Lakers, Season 2: What If Frank Underwood Ran the Purple and Gold? 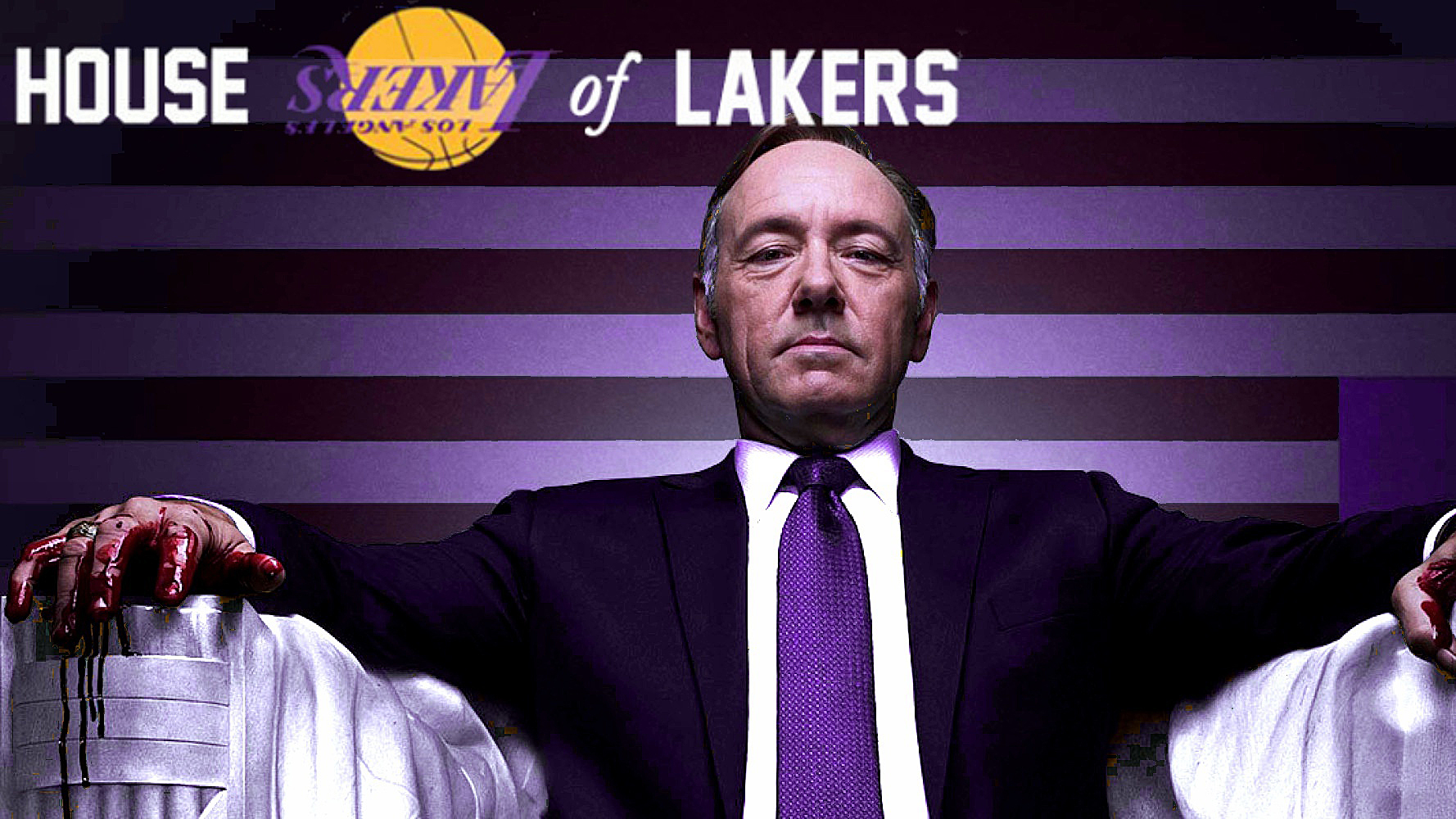 [CHARLES BARKLEY is waiting on a love seat in FRANK UNDERWOOD’s office. Frank walks in.]

Charles Barkley: You set up this meeting, Frank.

Underwood: Did I? Oh, my secretary must have forgotten to put it in the ol’ calendar. I guess I’ll have to send her to her room without any supper.

Barkley: What do you want, Frank?

Underwood: We can get to business in a little bit. Say, how are those dogs of yours — Mango and, what is it … Yahoo?

Barkley: Look, if you called me here to talk about nothing, I’m leaving.

Underwood: Apologies, Charles. May I speak candidly for a moment?

Underwood: Well — and this is very difficult for me to discuss — I’m getting orders from upstairs that I need to make some moves I’m not particularly comfortable with.

Underwood: I need some advice, Charles. It’s too dirty for my hands. I just wish I could be more cutthroat, like the people of … Oklahoma City.

Barkley: What about the people of Oklahoma City?

Underwood: Is this not common knowledge yet? Well … since I consider you a dear friend, I guess I can tell you this one little secret.

Underwood: Sam Presti is at a crossroads with Dion Waiters and Reggie Jackson. I’ve been told he is planning on cutting one of them outright before the trade deadline.

Barkley: Are you kidding me?

Underwood: Like a fresh cod at a barbecue. Knife to gills.

Barkley: That don’t make sense. Those guys are too talented to just cut for nothing.

Underwood: Not according to Presti’s data. The analytics say that having two high-volume shooters is detrimental to their team. He’s making that decision based purely on the numbers …

Underwood: If only I could be so heartless.

Barkley: That’s the stupidest thing I ever heard.

Underwood: I agree. You know me, Charles. I’m a player’s GM. I’m not into all that “scamalytics” junk. But I’m afraid that’s just the way the NBA works these days.

Barkley: That pisses me the hell off. I don’t know if I can keep quiet, Frank.

Underwood: I understand, Charles. As long as it didn’t come from me, I suppose you can speak your mind. Take care now.

Underwood: [To camera.] America, the ignorant. Don’t worry, I hadn’t forgotten about you. Sir Charles is nothin’ but a spoon that stirs the pot. Now let’s see what kind of varmint we attract. I’m like a wolf in a henhouse. It’s good to be back in the land of the free.

Secretary: Mr. Underwood. Dion Waiters is here to see you.

Underwood: Send him in.

Underwood: Dion Waiters … I was starting to think you were a figment of my imagination.

Waiters: You can’t keep calling me, Frank. We aren’t supposed to be talking with other GMs right now.

Underwood: Let’s just chalk this one up to boys being boys, shall we? Drink?

Waiters: What do you want?

Underwood: I want you in the great purple and gold.

Waiters: I’m serious. Our team is finally starting to click. We have championship aspirations, and I’m a big part of that. Flattered, but no thanks.

Underwood: You sure about that?

Waiters: What is this?

Underwood: Seems to me you’re not such a “big part” of anything in OKC.

Waiters: They can’t do this … they can’t. Those bastards just traded for me.

Underwood: I know it.

Underwood: Are you ready to rethink the Los Angeles Lakers? 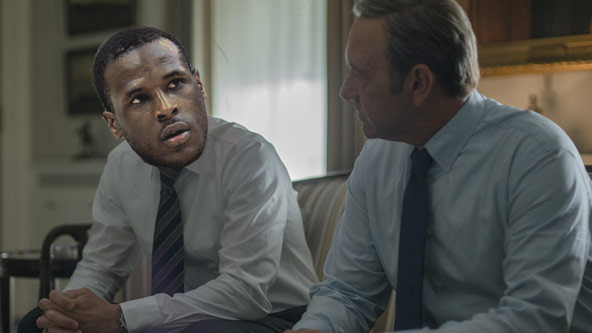 Underwood: If you want to be traded before the deadline, you need to do exactly as I say. Don’t listen to anyone else — not your family, not Presti, not God. Nobody.

Underwood: I need you to text the following message to Shams Charania …

“OKC is trying to get rid of me because of my stance on fracking. Meet me at noon tomorrow. The old abandoned library on 23rd. Tell no one. I’m scared. —D.W.”

Waiters: I dunno. You sure about this?

Underwood: I’m just looking out for your well-being, Dion. Trust me.

Underwood: Good. Now give me your phone so you can’t be tracked. I’ll have a new one sent to your hotel room in one hour. Oklahoma City will rue the day it ever questioned your abilities.

[Dion hands Frank the phone and hugs him for several seconds.]

Underwood: You’ll be like the son I never had. Now go.

Underwood: Mr. Ainge, it’s your ol’ rival, Frank. How are ya? Cannot complain on my end. I know you’re a busy man, so I’ll cut to the chase. I want you in on a three-team deal with Oklahoma City. I send you my 2016 first- and second-round picks, you send that hefty Gerald Wallace contract and Marcus Thornton to OKC, and they send me Dion Waiters. How’s that sound? I know, I don’t know why Presti would want Mr. Wallace, but as my grandfather used to say, “Why ask questions when the harvest comes early?” That’s right. Do we have a deal? Excellent. I’ll contact you when the deed is done.

[Twenty-four hours later. Frank pours himself a drink and turns on the TV.]

Reporter: Police are reporting that Dion Waiters has gone missing. He was last seen at the old abandoned library on 23rd …

Shams: Why exactly is that odd?

Shams: I trace everything, y’know — including text messages. Gotta cover all my bases. Funny thing about Dion’s text is … it was sent from right here … in your office.

Underwood: What exactly are you implying? 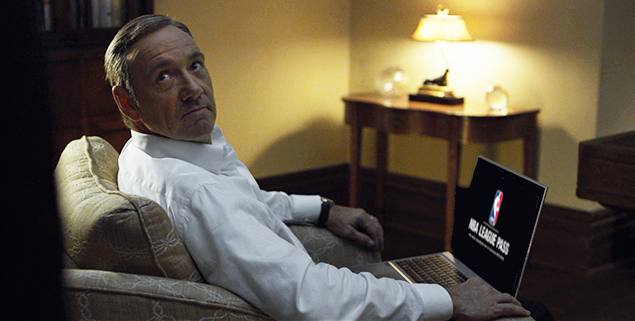 Shams: You know exactly what I’m implying. I think Dion’s disappearance is … I can’t believe I’m saying this out loud.

[Frank pushes Shams out the window.]

Underwood: [To camera.] Kid nearly caught me off guard for a minute. Had to call an audible. But don’t sweat the early demise of young Shams. He’s nothin’ but a bunny rabbit bouncin’ at a July 4 barbecue in December. For amber waves of … dead.

Secretary: Sir, Sam Presti and Clay Bennett are here to see you.

Underwood: Gentlemen, let me first say that I am so sorry about Dion. On behalf of the Lakers, we’d like to offer all our resources in the search effort.

Presti: Stop it. We know you had a hand in this.

Underwood: Do what, now?

Bennett: Dion was here before he was kidnapped. We know it. Now what have you done with him?

Underwood: I assure you, my hands are clean on this one.

Presti: We’ll get to the bottom of this.

Presti: Why did you call us here today?

Underwood: Simple. To discuss my acquisition of Russell Westbrook.

Underwood: Hold on a minute.

Bennett: I always knew you were delusional, but this is too much. I’m looking for the day they finally throw you in a jail cell, where you belong.

Underwood: I could say the same to you, Mr. Bennett.

Underwood: Well, I happen to have the cell phone of Mr. Dion Waiters right here. Interesting bit of information in this last text message he sent to Shams Charania …

Bennett: You son of a bitch.

Presti: Give us that phone now!

Underwood: Now I can’t do that, fellas.

Bennett: THEN I’LL TAKE IT FROM YOUR HANDS IF I HAVE TO.

Underwood: Go ahead, big man — but I’ve got screenshots that my secretary is ready to send out to every major publication at a moment’s notice.

Presti: We … we’ll contact Shams, then. He’ll help us clear up this mess.

Underwood: Good luck. Sources tell me that Shams has gone missin’, too. 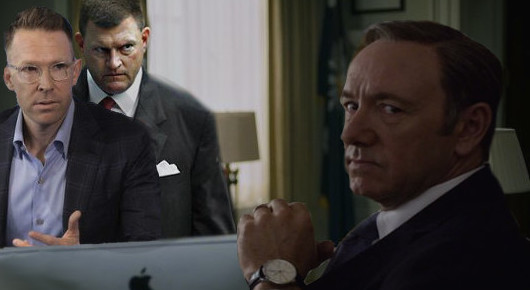 Presti: What do you want, Frank?

Underwood: I told you. Russell Westbrook.

Underwood: You give me Russ and the text disappears forever. I’ve already drafted the paperwork …

Bennett: I said do it!

Underwood: See, now was that so hard?

Bennett: This isn’t over. Let’s go.

Underwood: [To camera.] Did they forget what country they were in? This land is my land, not their land. Survival of the fittest rules once again. I take what I’ve earned and leave the rest to the lions.

Collective bargaining is so overrated.