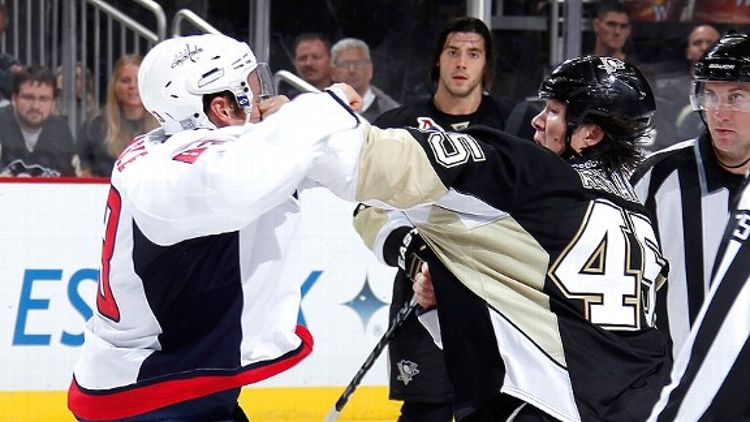 Three Stars of Comedy is a new feature that will take a look back at the month that was in the NHL, and recognize three personalities from around the league who produced the most comedy fodder for fans. It will appear every month during the regular season, or until the NBA lockout is settled and Grantland stops covering hockey.

The NHL is a funny league, and some worthy candidates didn’t quite make the cut. Before we get to this month’s winners, here’s a few who fell just short.

Arron Asham, Pittsburgh Penguins
Sure, his “go to sleep” move after KO’ing Jay Beagle was offensive and tasteless and an affront to hockey’s code. But you still used it. Yes, you did. Once we knew Beagle was (relatively) OK, hockey fans had the green light to incorporate “go to sleep” motion into their day-to-day activities. It became the ultimate celebration move. Pull off a one-sided trade in your fantasy league? Go to sleep. Silenced a Senators fan by tricking them into clicking on the fat gladiator intro video? Go to sleep. Heard Sidney Crosby give his three hundredth update on his concussion status without actually saying anything? Go to sleep. Literally.

The Columbus Blue Jackets
They’re rumored to be considering John Ferguson Jr. as their next general manager. As somebody who writes jokes about hockey for money, this is almost too good to be true. In fact, I don’t even want to think about it. Let’s move on.

And now, on to this month’s winners …

Phil Kessel and Dion Phaneuf, Toronto Maple Leafs
Here’s what you need to know about the personalities of the two franchise players from hockey’s most popular team: they don’t have any.

Phaneuf’s only known method of communicating his emotions is by adjusting the volume on the stereo in the Leafs’ dressing room, while Kessel’s full range of facial expressions spans from “wishing I wasn’t here” to “Dear Lord, please send a lightning bolt to get me out of this.”

The latter was most famously seen when he was the last player picked in the inaugural NHL All-Star fantasy draft, at which point Alexander Ovechkin made a big show out of snapping a picture. Ovechkin, of course, had been picked early in the draft, because he never makes it out of the second round of anything.

But beyond their boundless charisma, Kessel and Phaneuf have something else in common this year — they’re unstoppable. Kessel hasn’t stopped racking up points since opening night, and Phaneuf only stops temporarily to re-arrange the internal organs of anyone foolish enough to skate near him.

And what happens when two permanently unhappy players go on hit streaks at the same time? Hugs, of course. Magical, wonderful hugs. If you can’t laugh at two miserably cranky men leaping into each other’s arms in joy, then I don’t think I can help you.

After a 5-2 loss in New York, a frustrated Thornton said the Rangers were “probably the softest team we played against,” and in the process, a clear violation of the NHL superstar’s prime directive of “never say anything interesting, ever.” Tortorella took the remark with all the grace and dignity you would expect, which is to say none.

The notoriously volatile coach called the remark “classless,” advised the Sharks star to “just shut up” and pointed out that the Thornton “hasn’t won a God damned thing in this league,” because presumably the Hart Trophy doesn’t count.

There was no word on whether Tortorella ended his rant with the “go to sleep” motion, but I think we can all assume that he did.

(In case you’re wondering why I awarded the star to Thornton instead of Tortorella &#133; well, Sean Avery is headed back to New York. I think Tortorella will be making plenty of appearances on this list this season.)

Ilya Bryzgalov, Philadelphia Flyers
Ilya Bryzgalov has always been funny. During his “Why you heffta be mad?” days, he was ha-ha funny. In October, he decided to try branching out to train-wreck funny.

After looking awful during a brief appearance in a 9-8 loss to the Jets, Bryzgalov seemed to have a mini-breakdown in front of reporters. The sad spectacle featured the broken goalie saying things such as “I’m terrible” and “I don’t know what’s going on” and “I feel like I’m lost in the woods” and “At least I’m still better than Luongo.”

I made one of those up, but you get the point. After succeeding in the relative anonymity of Phoenix, where his most pressing concern was apparently the lack of parks in Winnipeg, this was a man wilting under the harsh spotlight of Philadelphia.

Would now be a good time to mention that Bryzgalov in one-month into a nine-year deal that pays him $51 million? Or that he’s making $10 million this year alone? The last time hockey fans saw something that ugly and front-loaded in Philadelphia, it was falling into a penalty box with Tie Domi.

So buck up, Ilya. You’ve got a long way to go. And if you can’t pull it together, well … I guess we’ll see you next month.