Hey … So … Tim Thomas? (And Other NHL Offseason Story Lines You Might Have Already Forgotten) 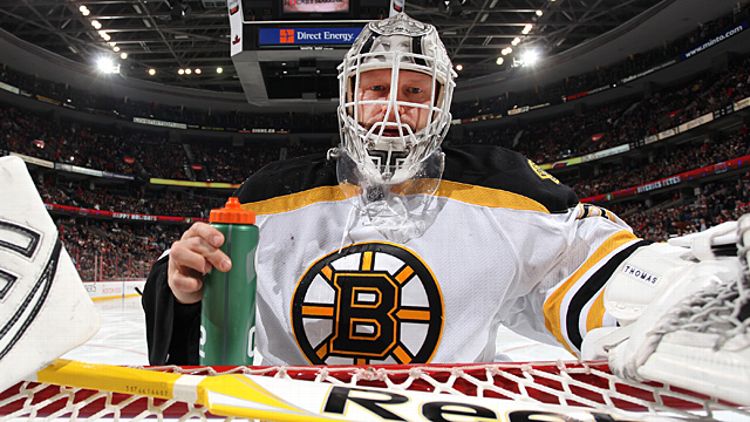 If you follow a television series long enough, you’ll eventually hit one of those story lines: The one that is set up brilliantly, seems to be building to an intriguing payoff, and then … just kind of gets forgotten about.

The NHL offseason isn’t a scripted TV show. (We know this because scripted TV shows don’t go weeks at a time with absolutely nothing happening.) But that hasn’t stopped this year’s edition from featuring its share of abandoned story lines.

Here are five subplots that seemed like they’d be important pieces of the 2013 offseason but (so far) have turned out to be duds.

Miller entered the offseason as one of the league’s most intriguing potential trade targets. Despite an off year — he was 17-17-5 and posted the highest goals-against average of his career as a full-time starter — Miller is still generally considered to be among the league’s top goaltenders. He’s just three years removed from a 2010 season that saw him win the Vezina and nearly lead the U.S. to an Olympic gold medal. He hasn’t dominated since then, but he’s been consistently solid, posting save percentages over the last three years of .916, .916, and .915.

He’s also entering the last year of his contract, and at 33 years old, may not have much interest in sticking around for what could be a lengthy rebuild in Buffalo. So it was no surprise when his name surfaced in trade rumors, first at last season’s deadline and then again heading into the offseason.

And then … nothing happened. The market for Miller never really seemed to heat up, and it now looks like he’ll be headed to training camp as a Sabre.

Of course, starting the season in Buffalo doesn’t mean that he’ll finish it there. All it would take is for one team to decide it was a top goaltender away from a Stanley Cup run, and the Sabres could get a fortune in return for Miller at the deadline.

But they’d be taking a chance if they went that route. Most Cup contenders already have strong goaltending, and returns on deadline-day rentals have plummeted in recent years. The Sabres will need to play this hand carefully.

When will Roberto Luongo break his silence?

After handing the starter’s job to Cory Schneider, the Canucks spent the better part of the last year trying to trade Luongo and his massive contract. When that didn’t work, they were rumored to be mulling a compliance buyout. Then the draft came along, and Vancouver pulled a swerve — trading Schneider to the Devils and re-anointing Luongo as their starter.

That led to the obvious question: How did Luongo feel about all this? There were plenty of indications that he wasn’t happy. When the trade happened, he told TSN that he was “shocked” and unsure about what he’d do next. He dumped his agent, which seemed like a major red flag given that he’s almost a decade away from his next contract negotiation. And then he went into a cone of silence, leading hockey fans to wait impatiently for him to finally tell us what was on his mind.

We’re still waiting. Weeks later, Luongo still hasn’t spoken publicly about the trade or his plans for the future. There are signs he’s warming to the situation — he’s back to cracking jokes on Twitter and making music video cameos, and his new agent said the goalie “has a contract and is preparing to be at training camp.” That’s not exactly an enthusiastic pledge, but it’s better than the alternative.

And yet still no word from the man himself. If Canuck fans were hoping to see Luongo and the front office publicly kiss and make up, they’ve been disappointed so far. There’s still time, but it may seem anticlimactic after six weeks of awkward silence.

The Sharks may be closing in on an NHL record for the most consecutive seasons in which the phrase “window closing” features prominently. But the 2013 offseason really did seem like a potential franchise turning point. Four of the team’s best players, representing more than $24.5 million in annual cap hit, were entering the last year of their contracts. With an aging roster that had produced consistently strong regular seasons but never made it past the conference finals, it seemed like it was time to either load up for one last run at a championship, or concede defeat and tear it all down for a rebuild. Either way, you got the sense that the team could be up to something big.

Instead, the Sharks have largely stood pat. They said good-bye to supporting pieces in Scott Gomez and T.J. Galiardi while acquiring Tyler Kennedy. They re-signed Joe Pavelski, but have yet to extend Joe Thornton, Patrick Marleau, or Dan Boyle. Perhaps most importantly, they locked in their best young player, pending restricted free agent Logan Couture, on a five-year deal.

But at this point, the 2013-14 roster looks virtually identical to last year’s model. More than a few teams would be perfectly fine with that sort of status quo, since the 2012-13 Sharks would have been on pace for 97 points over an 82-game season and lost only twice on home ice. But that was still only good enough for sixth place in the West, just two points from missing the playoffs. Columbus and Detroit’s move east will help, but the margin for error here is still fairly thin.

Maybe this is the year that everything falls into place and the Sharks finally fulfill a decade’s worth of expectations. If not, there will be some second-guessing for a franchise that appeared to be at a crossroads and decided to just keep plowing forward.

Technically speaking, Selanne is the best unrestricted free agent available right now. Realistically, though, the question isn’t whether he’s leaving Anaheim, but rather whether he’s coming back to the NHL at all.

This “will he or won’t he” routine has become one of the league’s cherished summer traditions. And by all means, Selanne has earned the right to take his time. At 43 years old, it’s remarkable that he’s still playing at a reasonably high level. He’s one of the most popular and well-respected players the league has ever seen, and it goes without saying that he’ll be a slam dunk Hall of Fame choice once his career is finally over.

And yet, this year’s installment of the Selanne retirement watch hasn’t seemed to attract the same level of attention as it has in years past. Where we used to get a steady stream of columns and blog posts weighing the possibility of his return, this year we seem to settle for the occasional tweet. Maybe it’s just fatigue setting in — after all, we’ve been through this every summer since 2007. Or maybe everyone is so used to Selanne’s annual indecisiveness by now that we just assume he’s coming back.

Either way, one of the best players in league history could be on the verge of announcing his retirement, and nobody seems all that concerned. Maybe we’ll start paying more attention next week. Or maybe we’re all just saving our angst for next year. Or the year after that. Or the one after that …

One year after becoming the first player to win the Vezina, Conn Smythe, and Stanley Cup in the same season since Bernie Parent in 1975, Thomas surprised the hockey world in 2012 when he announced that he’d be taking a year off. At 38 years old and with just one year left on his contract, it wasn’t unreasonable to assume that we’d seen the last of the Bruins star.

But when the 2013 offseason rolled around, it became apparent that Thomas wasn’t ready to call it a career quite yet. When the Islanders (who’d acquired his rights in a bit of salary floor chicanery) declined to toll his contract, he became an unrestricted free agent. Given his résumé, you could make a strong case that he was the best goaltender available on the open market. And while Thomas didn’t publicly confirm his interest in a comeback, he reportedly directed his agent to explore his options.

So far, those explorations haven’t yielded much. The rumor mill has occasionally linked Thomas with various teams, but the market for his services doesn’t seem strong. To further complicate things, his agent recently quit to take a front-office job in Columbus.

With few teams in desperate need of a goaltender right now, Thomas might have to settle for a training camp invite. It’s also possible that he could decide to scrap the comeback altogether, or at least put it on hold until a midseason injury creates an opportunity somewhere.

In the meantime, Thomas fans will have to be content with hitting refresh on his Facebook page and hoping for news of his return.

The Kings of the Call-up