Hey, Don’t F*$% This Up: The Houston Texans’ Outdated Offense 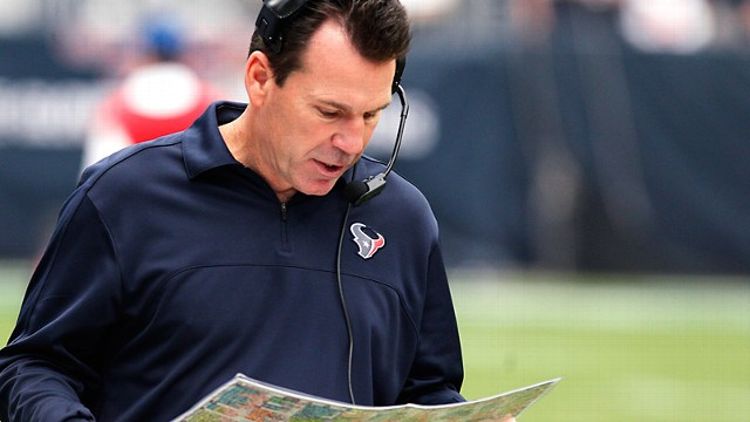 When the Texans’ season ended in New England, where Houston got its second beatdown in as many trips to Foxborough, most of the panic was directed at Matt Schaub. Yes, Schaub threw for 343 yards — one less than Tom Brady — but it required 51 attempts to get there. In today’s NFL, teams just don’t win Super Bowls without their best player residing under center, and although Schaub has put together his share of solid years in Houston, he isn’t the type of quarterback who wins in January. Or at least that’s how the thinking seemed to go.

That opinion of Schaub may be true, but in evaluating how far apart the Patriots and Texans actually were, the more telling difference was among those getting the throws, rather than those making them. New England spent almost the entire game shorthanded (as the Pats had been for the most of the year) after Rob Gronkowski reinjured his forearm. The typical Patriots still had their impact — Wes Welker had eight catches for 131 yards, and Aaron Hernandez added six for 85 — but it was the output of a lesser name that said everything anyone needs to know about the New England offense. For the entire regular season, Shane Vereen had eight catches for 179 yards. He totaled about half that against Houston, hauling in five passes for 83 yards, two of them for touchdowns. Vereen lined up all over the formation, and New England used the reserve running back to constantly exploit the coverage deficiencies of Houston’s inside linebackers. It was the exact type of opponent-specific game planning that has made the Patriots a problem for the past decade.

It’s also the type of game planning not often seen from the Texans. Coming into that playoff game against New England, the book on Houston was simple: “Get a lead and the game is over.” Offensively, the Texans have a specific plan, and against most teams they execute that plan well. The run game wasn’t nearly as effective last year as it had been in years past (mostly due to a lack of consistency and the resulting shuffling on the right side), but the run-first, play-action-later Houston offense still had plenty of moments. It’s when the running isn’t an option — either because of ineffectiveness or a big deficit — that the plan falters. Former Texans lineman Ephraim Salaam refers to it as “staying on schedule,” but with offenses like the ones in New England, New Orleans, and Green Bay, relying on point production that can so easily come off the rails just doesn’t feel like an option anymore.

Fifteen years ago, the zone-blocking scheme held dear by Mike Shanahan and offensive line coach Alex Gibbs was a way to win deep into the playoffs. John Elway and Terrell Davis were the ultimate play-action combination, and it was enough to win back-to-back Super Bowls. These days, very few teams lean on the straightforward zone running game for the majority of their offense. Shanahan’s new team did plenty of zone blocking this year, but it was combined with read-option looks and the constant running threat of Robert Griffin III. No offense to Matt Schaub, but I’m not sure teams are too worried about his feet.

As teams find new ways to use players who don’t fit certain boxes, the Texans are trying to shove their players into them. James Casey was almost exclusively a fullback in Houston a year ago before signing a three-year, $14.5 million deal in Philadelphia. Casey won’t be a fullback for Chip Kelly. He’ll likely be some form of H-back/slot receiver similar to the role Hernandez plays in New England. For years, there have been complaints about finding receiving complements to Andre Johnson, and instead of trying to figure out how Casey could exploit opposing linebackers, the Texans made him a lead blocker. (And let’s not forget Jacoby Jones, who left Houston and became a big player in Baltimore’s Super Bowl run.)

With Casey and Kevin Walter now gone, finding that secondary receiver has become Houston’s most pressing offensive issue. There are concerns at other spots on both sides of the ball (right guard and tackle, inside linebacker, nose tackle, and outside linebacker), but the first step in developing some creativity on offense is finding more players who deserve it. No team in the league is more in need of a player like West Virginia’s Tavon Austin, but he’ll likely be long gone before Houston picks at no. 27. There will be options at the end of the first round — notably Cal’s Keenan Allen, Louisiana Tech’s Quinton Patton, and Clemson’s DeAndre Hopkins — but the Texans could also be a candidate to drop down and look to add an extra third-round pick in the hope of filling one of those other needs as well. No matter how they choose to get him, Houston needs another pass catcher somewhere in this draft.

Whatever personnel Houston ends up with, the ultimate onus for their offensive development rests with Gary Kubiak and offensive coordinator Rick Dennison. Schaub probably isn’t the franchise’s answer for the future at quarterback, but he deserves a system that at least gives him a chance to prove himself. That system isn’t in place in Houston, and until it is, the Texans will be a long way from where they want to go.