Hey, Don’t F*$% This Up: Keeping the Defensive Line a Strength in Detroit 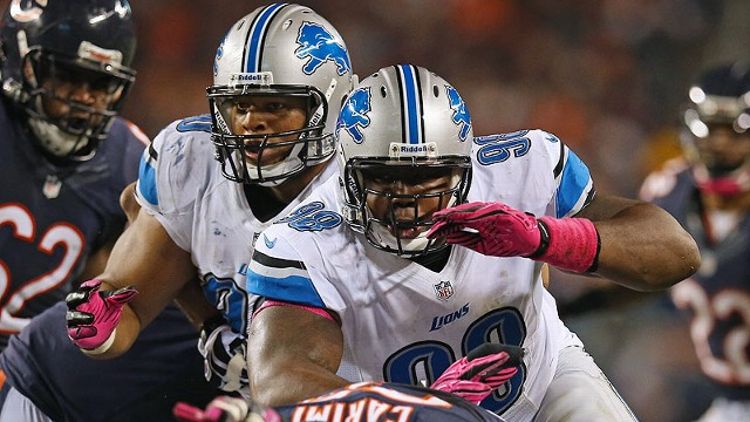 It wasn’t too long ago that the Detroit Lions were the NFL’s latest redemption darlings. Thanks to Matt Millen’s personnel blunders and Rod Marinelli’s flat effect, the Lions finished 0-16 in 2008, with an average point differential north of two touchdowns. Throughout its history, Detroit had typically been one of the league’s most snake-bitten franchises, but this was a rock bottom of unprecedented depth.

That spring brought complete overhaul. Millen was gone three games into the 2008 season and replaced with Martin Mayhew. Marinelli was replaced with Tennessee defensive coordinator Jim Schwartz in 2009. And with the first overall pick that year, the Lions hoped to usher in a new era under Matt Stafford. The group’s first season didn’t go much better — a 2-14 finish and only one spot lower in that year’s draft — but by 2010, signs of growth were already evident. Stafford played only three games, but Detroit still managed a 6-10 finish, with seven of losses coming by one score or less.

It was actually on defense, though, where the Lions finally seemed to be crafting an identity. Ndamukong Suh, who Detroit had drafted second overall that spring, had been entirely dominant as a rookie. Combined with newly signed Schwartz minion Kyle Vanden Bosch and the improved Cliff Avril, the Lions’ front four became the franchise’s new focal point. Detroit’s adjusted sack rate went from 30th in 2009 to sixth, and in the 2011 draft, the team elected to make its biggest strength even stronger by selecting Nick Fairley, fresh off a national championship at Auburn, in the first round.

With a returning Stafford and what was supposed to be the league’s most imposing front four, the Lions became a fashionable playoff choice, a faith they rewarded with a 10-6 finish and a Wild Card weekend trip to New Orleans. A 4-12 2012 followed, and the upward trajectory that defined conversations about the team two years ago is all but gone. Instead of searching for a piece or two to put them over the top, the Lions are back to choosing which pieces will stay and which pieces will go.

On offense, Detroit seems content to continue tooling with its high-volume passing game in order to bring it closer to the league’s best. Signing Reggie Bush is a clear sign that the running back help the team was looking for wasn’t of the grind-it-out variety. Bush should fit into the role the team envisioned when it drafted Jahvid Best, and without a clear second receiving option to Calvin Johnson, he’ll be a welcome weapon for Stafford. There’s no denying that Detroit must address holes along the offensive line. With left tackle Jeff Backus retiring and Gosder Cherilus leaving for Indianapolis, the Lions are without their two starting tackles from a year ago. Iowa tackle Riley Reiff was taken in the first round last year for just this reason, but that doesn’t address whichever side he won’t be on. Still, despite all the questions, there’s still little doubt what the Lions want to be on that side of the ball.

That isn’t the case on the other side. Three years removed from that sixth-ranked pass rush, half of Detroit’s starters along the front four are gone. After a down season compared to his excellent 2011, Cliff Avril took a modest deal with the Seahawks, and at age 34, Vanden Bosch was released. Even with both on the roster last year, Detroit’s adjusted sack rate had fallen back down to 29th — almost entirely a product of their inefficiency. Suh and Fairley, for their money, were actually quite good. Fairley enjoyed a huge jump from Year 1 to Year 2, including a game against Green Bay late in the season that showed just how good he can be. Both Suh’s on-field antics and his incredible rookie season contributed to the idea that he’d been slipping, but that just isn’t the case. According to Pro Football Focus, Suh’s 58 pressures were the second best among defensive tackles. For the most part, Detroit’s defensive tackle duo is what the team was hoping for. Now, it’s just a matter of making sure the interior linemen are flanked with enough help.

When the Lions drafted Fairley in 2011, it was an effort to make a moderate advantage a massive one. So far this offseason, that intent has been absent. After letting Avril walk, Detroit replaced him with another former Schwartz lineman in ex-Titan Jason Jones. Schwartz said last week that Jones, who’s played both tackle and end in his career, will be the team’s new starting left end. This feels like an overcorrection. Dave Birkett of the Detroit Free Press notes that Avril’s sack total from last season matches Jones’s from the past three combined, but while Avril struggles defending the run, that’s where the much bigger Jones adds something.

Adding a run-first left end would be more agreeable if his bookend on the other side was a speed rusher who made a living getting to the quarterback. That player isn’t on the Lions’ roster, and he’s not someone available any longer in free agency. (Lawrence Jackson, who played well in spurts for the Lions last year, is one stop-gap option, but his ceiling has long been realized.) Where he might be available is with the fifth overall pick. The top of the draft is full of pass-rushing prospects worthy of going near the top five, notably BYU’s Ziggy Ansah, a 6-foot-5, 270-pound athletic marvel with the speed to rush the passer and the size to stop the run. Alabama cornerback Dee Milliner is also an option, but considering the Lions have spent what limited cap room they have shoring up their secondary (re-signing Chris Houston and Louis Delmas and bringing in Houston safety Glover Quin), the glaring need seems to be where it seemed least likely a couple of years ago. It didn’t work out the first time, but that doesn’t mean the thinking was wrong. More strength on the defensive line would mean more insurance against the talents of two successful first-round picks going to waste.