‘He’s a Man of the People, and Wants to Party With Them’: Bass Drum of Death’s John Barrett Talks About Marshall Henderson at Ole Miss 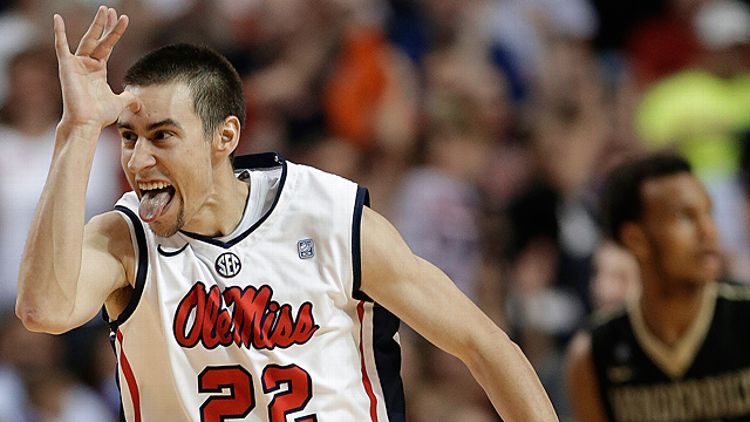 The chaotic, hooky garage rock John Barrett makes as Bass Drum of Death can sound like a reaction to his hometown of Oxford, Mississippi, more than a reflection of it. After all, the Ole Miss college town is widely known as a genteel, artsy, and Faulkner-approved enclave in the Magnolia State, a place everyone with bookish, hermetic, and alcoholic sensibilities threatens to move to at some point. It appeals to culture hounds who love everything about college football except the actual sport, aspiring connoisseurs of Southern literature and/or booze, and people who think Athens, Georgia, is played out and overexposed.

But you think of Ole Miss’s unofficial slogan — “we may not win every game, but we never lose a party” — and you start to see how Barrett can reconcile Bass Drum of Death’s aesthetic with intense Rebel fanhood. I don’t imagine him as a guy rocking khakis and Lacoste finery at a Grove tailgate, choppin’ it up with Hunter, Trotter, Trey, and the rest of his pledge class while making civil conversation with the absurdly attractive and sundress-clad coeds of Ole Miss. Listening to GB City, I pictured someone who crashed the Sigma Chi house after the game to steal its keg, urinate in its kitchen and hit on Kappa Alpha Theta’s social chair. One side is Oxford at 11 a.m., the other is Oxford at 11 p.m.

These are exciting times for Barrett as both a musician and an Ole Miss diehard. His self-titled second LP was released in June on Innovative Leisure and, apparently, Andre 3000 is a fan. Moreover, the Rebels are making actual headlines over the summer, not just the typical ones where Andy Kennedy or whoever’s coaching the football team is featured in some “hot seat” survey. Marshall Henderson became one of the 2013 NCAA tournament’s breakout personalities, conjuring a wildly hilarious alchemy of Nick Young’s volume shooting, Johnny Manziel’s online persona, and J.R. Smith’s taste for the nightlife. The top three groupings of Henderson on Google Images are “party,” “high school,” and “douche.” To the surprise of no one, Henderson was suspended last week for the thing that the Marshall Hendersons of the world get suspended for, i.e., “violation of team rules.” Meanwhile, the Rebel football team is coming off a ridiculously surprising 7-6 season that led into a ridiculously successful recruiting class that included no. 1 prospect Robert Nkemdiche.

Barrett took the time to answer our questions regarding the controversial Henderson’s recent suspension, the expectations for the Rebel football team, and Oxford’s justifiable discomfort in the midst of all this positivity.

Is Henderson’s suspension worth the risk, considering he’s Ole Miss’s most popular basketball player, possibly ever?

As a 25-year-old musician, my views on that sort of thing are probably a bit more liberal than a coach or administrator. He didn’t get arrested or put anyone else in danger. At the same time, if there are team rules that apply to everyone, then no one should be exempt, no matter how much interest or exposure that they generate for the team. I trust that they’re handling it in the right way, as kind of a wake-up call for him, or else he would’ve just been kicked off the team immediately. Ole Miss fans are kinda weird when it comes to Marshall; they love him when he’s hitting game winners and riling up the Auburn student section, but some people also seem quick to turn on him. Ole Miss fans in general are pretty old school and have never really dealt with having a player like this on our team. We’re used to cheering against players like him. Like a friend of mine said today, there’s a whole lot of things to be embarrassed about as an Ole Miss fan, and Marshall Henderson isn’t one of them.

Do you feel that Henderson’s antics are necessary to generate interest in basketball at Ole Miss?

They certainly were last year. We’d been in a huge rut for a few years, and he was the guy that jump-started us out of that, and probably saved Andy Kennedy’s job. Attendance was better, and people were way more interested around town than they would be usually. The thing that got me hooked was watching him play early in the year, the nonconference games. He was doing the same stuff, but with 500 people in the crowd — throwing up 3-goggles, going nuts when he was on the bench, talking to the refs, crowd, anyone who would listen. I’ve been going to Ole Miss basketball games for a solid 17 years now (and was even a ball boy in the late ’90s/early ’00s), and I’ve never seen it like it was this past year. It got crazier and more outrageous every week.

If Henderson sticks around, what kind of trouble can a guy like him find in Oxford?

If he’s still here for the next season, which I hope he will be, it’ll definitely be interesting. He was always out at the Library (as close as Oxford gets to “the club”) after games, taking pictures with sorority girls. I wish he didn’t have to tone that sort of stuff down, though; he was at the bar across the street from the arena in Kansas City after they beat Wisconsin in the NCAA tournament within 30 minutes of the game, partying with fans. How can you not like that? He’s a man of the people, and wants to party with them after they win. You never saw him out after a loss.

On the football side of things, Ole Miss is having a revolutionary period of recruiting success. How is this affecting the mood in Oxford?

Oh man, people are pumped. I’ve never followed recruiting until this year, and it was so intense; in the SEC, it might as well be another season. Doing so well in recruiting capped off a pretty exciting year for us — winning a bowl game, beating the hell out of our rival for the first time in four years, and having a winning season with a first-year coach. Safe to say, people are excited about next year.

Considering Ole Miss’s notorious inability to sustain a winning culture, is there a fear in Oxford that this prosperity will be fleeting?

Absolutely. We’ve had this sort of preseason hoopla before, and it hasn’t ended well. As an Ole Miss fan, you’re conditioned to plan for the worst, thus the saying, “We may not win every game, but we never lose a party.” People are very cautiously optimistic about next season, and I’m one of them. The die-hard side of me thinks we can go 10-2, but the realistic side of me knows that, in the SEC West, 4-8 is a very real possibility.

Will Ole Miss ever be a factor in the SEC Championship race or is there simply neither the resources nor the support to match Alabama or LSU?

It’s gonna be hard as long as [coach Nick] Saban is at Alabama. That team is unreal, year-in and year-out. LSU is more prone to having a down year here or there. The key to competing with those types of teams is having sustained recruiting success, and getting the most out of good players once they get here. This year was great for us, but Alabama and LSU have those type of recruiting years every single year. Hugh Freeze is onto something at Ole Miss, and I think he’s smart enough and good enough to keep it going and get us to the point where we can compete against those types of teams. I just hope we can afford to keep him!

Describe the difference in Oxford when the football team is actually winning compared to the “we never lose a tailgate” days.

Oxford is a very small town, and football season is the biggest tourist time of the year, so if Ole Misss is doing well, it gets really crazy. On big weekends there will be 150,000 people in a town meant for 30,000. Even if we’re bad, people still come into town and go to the Grove, but not as many of them. And they’ll stay in the Grove during the game. Oxford’s a party town on its own, but if Ole Miss is good that year, it gets to a new level pretty quickly. As a resident, it can be annoying at times to put up with, but the frustration of enduring standstill traffic and not being able to get a table at a restaurant every weekend in the fall quickly goes away if we whip LSU’s ass. Personally, I like to win the tailgate AND the game.