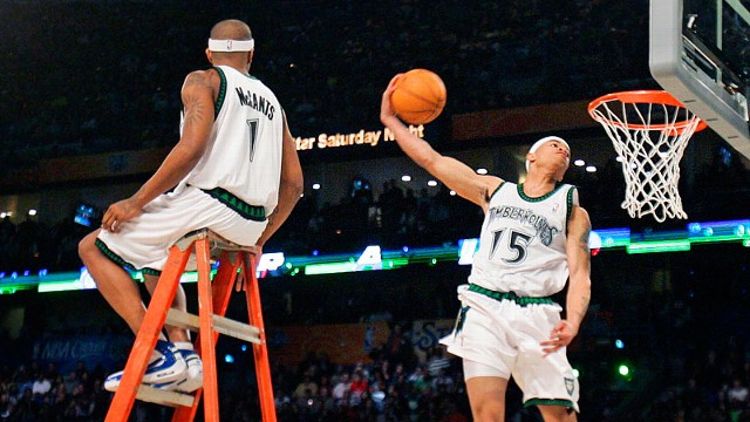 The following list of historical complaints is best read in the voice of the Micro Machines man: these stars aren’t big enough, the prize money is not a real incentive, there is a finite amount of dunks humans can do and they’ve pretty much all been done, Vince Carter did it better, Spud Webb did it better, a guy on YouTube did it better, these dunks feel too gimmicky, this format is flawed, the scoring is flawed, the judges don’t take it seriously, the fan vote doesn’t match my vote, the amount of staging necessary for that final-round dunk sure made it seem like that participant was assured a safe passage into the final round.

We’re long on complaints and short on answers. Offer a million-dollar purse. Have LeBron compete. Make everyone team up with a kangaroo.

So what is the root cause of our frustration? Well, Ron Howard might know. On a Grantland podcast, John A. Walsh asked Ron, “How would you make ESPN better?” Here’s my favorite part of his answer:

“People need context to heighten the drama and to heighten the suspense. And the more you know about what makes a player tick or what he or she may have been through to get to the place they are now, the more we relate to the journey.”

Ah, the journey. So if Ron Howard is spitting hot truth that can be applied to all sports, maybe when we talk about fixing the dunk contest we should talk less about the contest and more about the contestant’s journey.

The word “journey” pops up a lot when you talk about narrative stories or kick-ass karaoke. For the former, journey usually means “The Hero’s Journey” — a narrative pattern outlined first by ancient man, then later by Joseph Campbell, and most recently by Christopher Vogler.

Vogler famously synthesized Campbell’s book The Hero With a Thousand Faces into 12 stages that became a playbook for Hollywood folk. Screenwriters and studio execs are experts on The Hero’s Journey. Here’s the weird thing, if you’re above the age of 5, you’re also an expert. You’ve just never named the 12 stages.

Here’s how Vogler breaks it down in his book — The Writer’s Journey: Mythic Structure for Writers.

1. The hero/ine is introduced in the ORDINARY WORLD
2. they receive the CALL TO ADVENTURE
3. They are RELUCTANT at first or REFUSE THE CALL, but
4. are encouraged by a MENTOR to
5. CROSS THE THRESHOLD and enter the Special World, where
6. they encounter TESTS, ALLIES, AND ENEMIES.
7. They APPROACH THE IN-MOST CAVE, cross a second threshold
8. where they endure the ORDEAL
9. They take possession of their REWARD and
10. are pursued on THE ROAD BACK to the Ordinary World.
11. They cross the third threshold, experience a RESURRECTION, and are transformed by the experience.
12. They RETURN WITH THE ELIXIR, a boon or treasure to benefit the ORDINARY WORLD.

You’re already an expert on this because you’ve seen some form of this pattern play out since you were in diapers. It’s the journey of Dorothy, Cinderella, Luke Skywalker, Rocky Balboa, Daniel LaRusso, Marty McFly, Ray Kinsella, Creasy Bear, and pretty much every other character you’ve ever rooted for, including Audi’s lovable Super Bowl scamp. The commercial doesn’t hit all 12 stages, but the framework is there:

I rooted for that kid like he was a professional athlete. So — Half-Baked Idea Alert — it raises the question: Can The Hero’s Journey be a roadmap for the dunk contest? Let’s try it.

We’re introduced to the players in their ORDINARY WORLD. This is the Hard Knocks home visit. We’re seeing normal dudes with families and fears. Suddenly they get a CALL TO ADVENTURE — Publishers Clearing House–style. Cameras, balloons, one of those oversized checks. Some players will be pumped (Dee Brown joke rimshot). Some will see the fanfare and REFUSE THE CALL. Are they just being non-committal jerks who hate fun?

“It’s that I’m scared about my knee, all right? I said it! If I blow out my knee I won’t be able to provide for my family! I’m scared!”

“You can do it,” the newly introduced MENTOR will say. Fans are on their phones everyday looking at dunking versions of this video:

Come All-Star Weekend, the guys CROSS THE THRESHOLD into their new world. This world didn’t have a 3-point contest 20 minutes ago. This is Dunklandia — a high-low aesthetic mix of Tron and Neon Boudeaux’s homecourt in Blue Chips. Bill Hader as Stefon has already walked America through the details. “This place has got it all — ziplines, alligator pits, shatterboards. What’s a shatterboard? Well, it’s that thing when they make a backboard out of breakable glass so if you dunk hard enough you shatter the backboard.”

Cue Michael Buffer. We’re ready to start the TESTS (dunks) with help from our ALLIES (Chris Paul) and ENEMIES (gravity, the rim). After an hour of triumphs, heartbreak and reality show-style confessionals, our two finalists advance to the IN-MOST CAVE — the dark VIP section of Dunklandia. This is the biggest and most dangerous ORDEAL yet. All that and more, coming up after the break.

OK, back to the real world. Here’s where we take the biggest left turn. Suppose Gerald Green and Eric Bledsoe are in the finals. Shouldn’t this be our Rocky vs. Drago moment? Gerald Green isn’t really battling Eric Bledsoe. Their mutual foe is Isaac Newton. That’s because the dunk contest is a MAN vs. NATURE battle. Gerald Green is George Clooney and the rim is the Perfect Storm. The problem is that the story’s getting bigger and the waves aren’t. So how about this: For the final round, we turn the contest from MAN vs. NATURE to MAN vs. MAN. The contestants can block each other’s dunks. Here’s the YouTube clip that made me think, “Oh, that’ll work.”

Three rounds. No judges. Winner claims their REWARD trophy and heads back with charity money — an ELIXIR for their favorite cause. Fears, fellow contestants, and complaints about an event we love, somewhat vanquished…until next year.

Filed Under: Half Baked Ideas, NBA

See all Half Baked Ideas