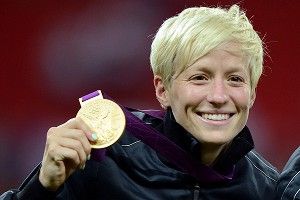 Football has returned, as if it ever really went away. In this week’s pod, Michael and Roger welcome the return of the English Premier League like an old friend. A friend that always makes you pay for drinks, sleeps with your wife, and reverses its Hummer over your dog. But still, somehow, the love endures.

The opening weekend was as unpredictable as the Blazered Men predicted. Roger’s beloved Everton spoiled the debut of Robin Van Persie in a tartan Manchester United kit, Liverpool’s Brendan Rodgers wished he was still in Wales, and Tottenham’s loss to Newcastle proved Andres Villas-Boas’s project was still alive and well. But all this is really just the appetizer to the pod’s main course. Inspired by Augusta, the Men in Blazers are joined by their first Lady Friend of the Pod. Fresh off the Olympics, U.S. Soccer’s Megan Rapinoe drops by to offer her thoughts on crazy goalkeepers, Sir Ian Darke, and the fate of women’s professional soccer leagues.