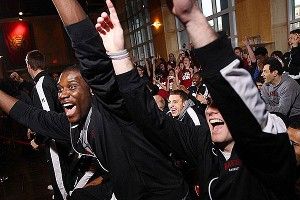 Harvard, y’all! Let’s make a bunch of nerd jokes while we can, because the 12th-seeded Crimson face Vandy, a 5-seed, in the first round, and my dad told me to take the Commodores. Also they will all be our bosses one day, and then these jokes won’t be nearly as funny.

Grantland’s Shane Ryan wrote about the Dork Squad earlier this year. Here’s what he had to say:

Q: Whom did Harvard beat in the conference tourney?

A: Not so fast, amigo. The Ivy League is the last Division I conference that gives its automatic berth to the regular-season champion. Harvard clinched last night when Penn lost at Princeton. If Penn had won, it would have forced a one-game playoff with Harvard to decide the conference champion.

Q: When was the last time Harvard made the tournament?

A: 1946. That year, all college-aged men were still coming home in boats from WWII, so Division I basketball was played by women. They made a movie about it called A Harvard of Their Own, starring Lady Gaga as Jeremy Lin.

Actually, what happened in 1946 is that only eight teams were invited, and Harvard lost in the quarterfinals to Ohio State. Oklahoma A&M won the title game, beating North Carolina 43-40. (Despite the loss, UNC still claims 1946 as one of its 15 national championships.)

Q: What Harvard-related name did they call the community college or state school in your hometown?

A: North Country Community College in Saranac Lake, New York, was called “Harvard on the Hill.” Yours in the comments.

Let’s run that last one back! See you guys in the comments section.

Harvard is scheduled to meet Vanderbilt at 4:40 p.m. Eastern on Thursday.

Remember How You Liked VCU?