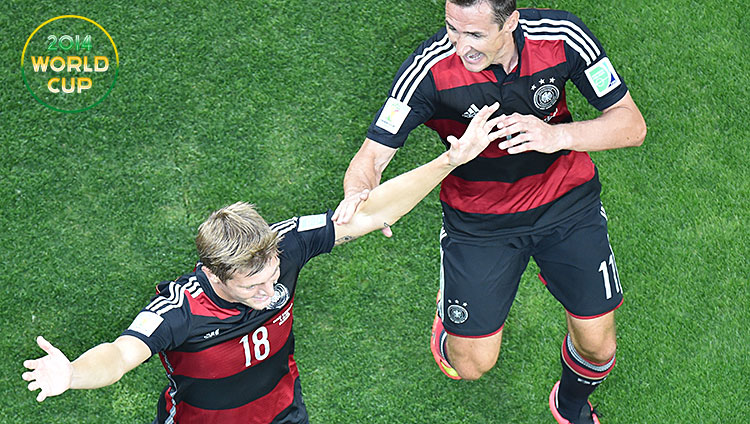 Mercifully, for Brazil, this tournament is basically over (man, is that third-place game going to be awkward). The aftereffects of this loss will be felt by the country’s soccer program for years to come, and it’s no exaggeration to say the next generation of players will be asked to make up for what happened in Belo Horizonte on Tuesday. But it’s what this result says about the German team that’s of more immediate importance at this World Cup.

Because, my god, the Germans.

Should Germany go on to win this World Cup, it’s entirely possible history will remember it as a juggernaut, and after watching that demolition of Brazil, it’s hard to think otherwise. But before the Belo Horizonte fireworks, Germany was just pretty good. It came in as one of a small group of realistic contenders. Yes, it demolished Portugal, 4-0, but keep in mind Portugal had fallen on a Pepe-shaped sword in that match and was down a man. Between that contest and yesterday, Germany was consistently just good enough.

Yesterday was a good deal better than just good enough. You never want to attribute too much to a single game, even one as impressive as this, but that Germany performance was enough to make you wonder if maybe there were more to the team’s play in the early stages of this tournament. Joachim Löw’s side certainly seems to be peaking at the right time, and maybe that was by design.

It wasn’t until the quarterfinals, against France, that Löw deigned to trot out a normative lineup. Germany had an actual striker in Miroslav Klose, and Philipp Lahm played at right back, the position he may be the best in the world at playing (even if Pep Guardiola has successfully played him at defensive midfield at Bayern Munich).

This isn’t an issue of different strategies for different opponents. This lineup is simply better, capable of achieving breathtaking heights when an opponent makes a number of mistakes (like, say, seven). It’s also a lineup that can score early and shut the game down, like it did to France.

So what the hell, Jogi? Why haven’t we seen this all tournament? Was this all a long con? Was it about saving Klose’s 36-year-old legs, to make sure he had spring in his step when it mattered? Was playing Lahm in midfield about giving Sami Khedira and Bastian Schweinsteiger time to get healthy? It’s possible that Löw really believed he needed to focus on getting his best Germany team in order by the quarterfinals, and that he thought his Plan B lineup was enough to get him there. If that’s true, man, did he walk a fine line against Algeria for 70 minutes.

Regardless of the reason, Germany has clearly reached fire-breathing monster status ahead of the final. It played an aggressive high line and pressed the heck out of Brazil. Aside from a 15-minute stretch to start the second half (when it was already down 5-0), Brazil had no answers. Schweinsteiger and Khedira ran rampant, completely controlling the midfield. That left Germany’s attacking foursome (Mesut Özil, Thomas Müller, Klose, and Toni Kroos) free to do viciously cruel things to the Brazilian back line. Brazil fell apart, but the way it did was tailor-made for Germany to exploit.

Tuesday was probably the best German result we’ll ever see. The result is also a pretty good sign that Germany, either by intent or simple dumb luck, is peaking at exactly the right time. That’s rare, and it’s an advantage Germany will have when it walks onto the field Sunday. After what it did to Brazil, the thought of Germany with an added advantage is incredibly intimidating.

Mike L. Goodman (@TheM_L_G) is a freelance soccer writer. You can also see his work on ESPNFC, Foreign Policy, and StatsBomb.