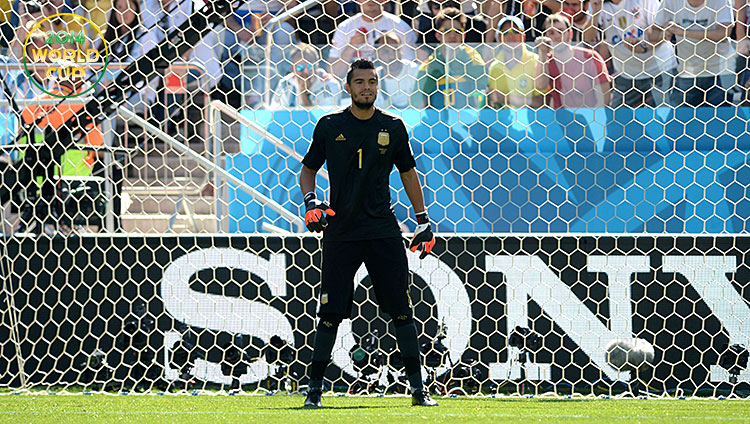 In the John Hughes high school class version of Argentina’s national team, Lionel Messi is the quiet, smiling genius who wins over all the teachers through his sheer brilliance. Ángel di María plays the fragile cello prodigy, performing out there in the wings of the gymnasium before cutting in with his jaw-dropping skill. Sergio Agüero is a legend in his own time for getting it on with the principal’s daughter, in this case Giannina Maradona, child of Diego, to whom the Manchester City forward was married for four years before splitting off and getting called a wimp. (Mr. Hand of God himself needs better writers.)

The 27-year-old serves as Argentina’s no. 1 goalkeeper, a position he has somehow held since before the 2010 World Cup despite being not particularly good. Romero won the 2007 FIFA U-20 World Cup and a gold medal at the 2008 Summer Olympics, which is great and all, but his market value looks like a steep mountain that peaked in 2011 when he moved from AZ Alkmaar to Sampdoria for €2.1 million before crashing like a boulder hurtling down a cliff.

Romero played a total of three Ligue 1 matches for Monaco last season, buried on the bench behind Danijel Subasic, who served as backup on Croatia’s national team. In hindsight, Romero’s primary achievement during the 2013-14 campaign seems to have been starring alongside Colombia’s new superhero James Rodríguez in a convoluted game of one-on-one that was shot with GoPros on a soccer pitch just south of The Eyrie, owned by House Arryn. Spoiler alert: Romero wins the faceoff but horrendously bobbles one shot before blaming the sun, which is behind him.

Is this the man you want behind Argentina’s “unimaginative defensive base”? Is he the guy you want charged with securing Messi’s legacy and, you know, also winning the World Cup? Probably not, but he’s going to be there regardless. Coach and fake fainter Alejandro Sabella has made that much clear with vocal support that is significantly more steadfast than his goalie’s occasionally shaky hands.

The choice to become a goalkeeper is a strange one. It requires a young player to decide he’d like to play soccer in an entirely different manner than nearly all of his peers. But choosing to be a goalie in, say, the United States, Germany, or England makes a hell of a lot more sense than deciding to do so as a young Argentine. Romero got there, predictably, in a roundabout way, growing up the youngest and smallest of four basketball-playing brothers, only choosing soccer because he couldn’t physically compete on the court. His brothers call Sergio, who is 6-foot-3, “Chiquito,” which means “tiny.” And the name wasn’t exactly dispensed with love.

As a goalkeeper, you get noticed for doing the spectacular or the spectacularly stupid. The former is preferable to the latter, but sometimes they come sequentially. In the 67th minute against Iran, with the score tied 0-0, a cross came into the box. Romero took a step toward it, leaving his line, only to then realize there was no way he would reach the ball before midfielder Ashkan Dejagah. The Iranian attacker got his head on it, putting a strong effort on net that Romero parried over the bar with an acrobatic, last-second leap. It was a stunning save, albeit a mostly unnecessary one caused entirely by the earlier mistake. An article on FIFA.com called Romero “Argentina’s accidental hero,” which feels about right, although a comment from user ArnhemBarcelona on the goalkeeper’s FIFA 14 profile sums it up even better: “He made loads of bloopers for me, such a great guy!”

Being a goalkeeper on a South American team is an especially dangerous and lonely place. It’s all pressure and no glamour. Just watch this documentary about Brazil’s Júlio César, which followed him going into a tailspin following the 2010 World Cup, to get a sense of the occupational hazards. Romero insulates himself. He calls himself “reserved and quite shy,” and he refuses to use Twitter or Facebook. (This loner mentality runs in the family. His wife, 36-year-old Argentine model Eliana Guercio, “is said to be disliked by most of the other prominent footballer’s wives, as she keeps her distance and surrounds herself with her own inner circle. The model and actress is described as not being on the wives ‘first team’ and is often seen alone or with other people at the games.” At least Romero has Rihanna on his side.)

And yet, he’s still there, standing between the pipes, just the second goalkeeper to earn 50 caps for Argentina. Somewhere up the field, Messi attempts to dribble through three defenders while Agüero waits for a pass that may or may not come. Di María watches from the bench, injured thigh wrapped tightly. Argentina holds its breath, the World Cup trophy closer than it has been in 24 years, ready to be lifted by the minuscule attacking trio. When it’s finally Romero’s turn, Tiny will tower over his teammates. Ninety percent of winning is just showing up, right?