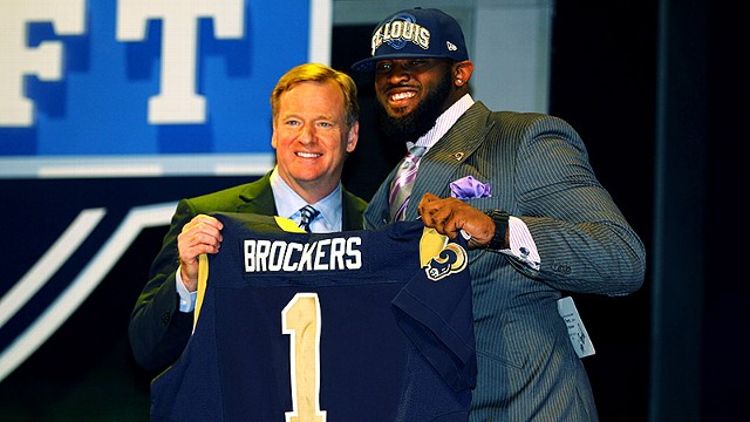 Scattered throughout the channel-flipping madness that is Week 1 was a sight that had become familiar by late Sunday afternoon. Whether it was in Carolina, St. Louis, New York, or New Orleans, former first-round defensive linemen seemed to be making plays constantly. Rams defensive end Robert Quinn (2011, 14th overall) sacked Carson Palmer three times, causing fumbles on two of them. Muhammad Wilkerson (2011, 30th overall) had a sack for the Jets, and his linemate Sheldon Richardson (2013, 13th overall) added several key stops in the run game. Cameron Jordan (2011, 24th overall) looked to be acclimating nicely to the Saints’ new 3-4 defense, and each of the past two players drafted 14th overall (Rams defensive tackle Michael Brockers and Panthers defensive tackle Star Lotulelei) were impressive in anchoring their teams’ run defense.

Each of these teams (aside from Carolina, which had a more than respectable showing against Seattle) won Sunday, and in doing so, appeared to add even more evidence that winning teams are built from the lines out. It was all enough to make me wonder — when it comes to defensive lines, is that adage actually true? There are some who look at the 49ers’ turnaround and note that San Francisco made an effort to invest heavily in its offensive line, spending three first-round picks in four years to build what may be the best group in football. There are some teams who’ve made a similar choice on defense, most notably the Rams, who’ve drafted three defensive linemen in the first round since 2008 (to go along with Quinn and Brockers, St. Louis also has Chris Long, taken second overall in ’08). My question was whether this strategy has actually worked historically, whether a first-round defensive lineman actually makes an appreciable difference in how a team’s defense performs overall.

To do this, I found each defensive tackle, defensive end, or 3-4 outside linebacker drafted in the first round from 2002 to 2011 who would eventually play a significant amount of time. This wasn’t an effort to see whether first-round defensive linemen are safe choices, but what impact the ones who can play actually provide. For players drafted from 2002 to 2007, that meant players who’d started at least 48 games (the equivalent of three full seasons) in their careers. For 2008 and 2009, that number was 32. For 2010 and 2011, it was 16.

In measuring the improvement for each defense, I looked at the team’s defensive DVOA in the season before drafting the lineman and the DVOA for that lineman’s second season — the thought being that many players don’t fully realize their role until their second year in the league.

Fifty-six players met the criteria, and on average, their teams improved their defensive DVOA ranking by 3.47 spots. Typically, defenses experience a much higher variance than offenses, and that 3.47-place jump is likely no more a product of adding specific players than it is a product of random chance. There are a few instances, though, where the individual impact is clear. The biggest jump among all 56 cases was for the Houston Texans, who went from 31st in DVOA in 2010 to fourth in 2012, thanks in large part to J.J. Watt having the best season by a defensive player in about 25 years. The second largest belonged to the Lions and Ndamukong Suh, who improved 23 spots (32nd to ninth) from 2009 to 2011. Aldon Smith’s 49ers went from 15th to third during his first two seasons, and in the first two years after taking both B.J. Raji and Clay Matthews in 2009, Green Bay improved from 12th to second.

In each case, the improvement can’t be attributed solely to who a team drafted in the first round. The Texans added Johnathan Joseph in the same season they drafted Watt, and Charles Woodson was one of the best defensive backs in football for the first two seasons of Matthews’s and Raji’s careers. But it’s clear that finding a star defensive lineman can provide immediate returns.

This isn’t revelatory information. Good players typically play for good teams. There are some positions, though, that tend to be more indicative of a team’s overall success than others. Over the past five seasons, 34 of the 50 defenses that finished in the top 10 of DVOA in their respective years featured at least one Pro Bowl player (I fully understand the problems with using Pro Bowl appearances as a way to measure a player’s performance; in this case, we just aren’t really left with a better alternative) on the defensive line or at outside linebacker in a 3-4 — 68 percent of the top 50. (Three others among the 50 had Darrelle Revis, which should almost exclude them from consideration.)

Again, on the surface, this isn’t really a surprise — good teams have good players — but when you compare it to other positions, the results show that it’s more important to have talent in some areas of a defense than others. Only 32 percent of top 10 defenses had a Pro Bowler at linebacker in that five-year stretch, and although more top 10 units included a Pro Bowl defensive back (72 percent), I would contend that the production that leads to Pro Bowl appearances for defensive backs (interceptions compared to sacks) is less indicative of an individual player’s performance.

Overall, the evidence is not overly convincing. First-round defensive linemen aren’t a guaranteed — or even reliable — method to quickly improve a defense, and it seems that when it comes to team construction, a quality secondary is just as important as building a star-laden group up front. Over the next few seasons, it will be worth watching to see if players like Quinn, Brockers, Lotulelei, Richardson, Fletcher Cox, and Dontari Poe play well enough to cause a shift in that thinking. If it is going to happen, they’re already off to a pretty good start.