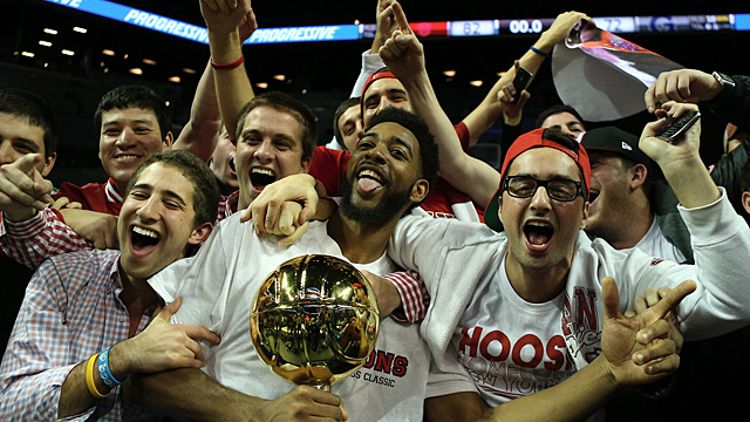 In just its sixth year of existence, the Legends Classic isn’t exactly legendary or classic, and as early-season tournaments go, it certainly isn’t as renowned as the Maui Invitational. But this year’s Legends Classic was played in Brooklyn’s new Barclays Centre and featured the no. 1 team in the country (Indiana), the no. 1 recruiting class in the country (UCLA), another team that should comfortably make the NCAA tournament (Georgetown), and a team that is Georgia (Georgia). Because of this, this year’s Legends Classic was must-see TV for me. If you didn’t feel the same way, here’s what you missed: four takeaways from Monday’s and Tuesday’s games.

Because of their inconsistency a season ago, the two big questions concerning the preseason no. 1 team in the country this year were whether they could handle being the hunted rather than the hunters and whether they could beat a halfway decent team outside of Assembly Hall. Both questions were answered last night, even if they were answered less emphatically than Hoosiers critics might like.

Now, Indiana didn’t exactly beat a national title favorite last night, but don’t let unranked Georgetown fool you — the Hoyas will spend more weeks in the Top 25 this year than outside of it and they should be a lock to make the tournament come March. Sure, the Hoosiers could have erased some doubts by cruising to an easy win instead of getting taken to overtime, but the fact of the matter is that Indiana beat a quality team away from home in a game they were supposed to win. That’s something they did only once last year, when they beat Purdue in West Lafayette.

(In truth, last night’s game would have been a much easier win for Indiana had two things happened: if Yogi Ferrell had made his free throws down the stretch and if Tom Crean had stayed in the zone defense that was working well all game instead of playing man-to-man against Georgetown’s Princeton offense, which is borderline impossible to guard when you’re unfamiliar with it and have had less than 24 hours to prepare.)

Indiana beating Georgetown in November doesn’t mean we should go ahead and crown the Hoosiers national champions just yet. They still have several concerns to address, such as the fact that Cody Zeller and Christian Watford don’t demand the ball enough. But it does mean that this Hoosiers team has matured and taken a step toward being a legitimate national championship contender. If they couldn’t pull out this win, they’d look more like a team that beat some good opponents at home last year and added a few recruits.

If you’re a casual college basketball fan without a favorite team, or if you’re looking for another team to follow because your favorite team sucks, it’s time to familiarize yourself with Georgetown. The Hoyas embody everything there is to love about college basketball. (If you close your eyes, you can hear all the Syracuse fans vomiting after they’ve read that last sentence.) Even though the Hoyas are young (no seniors), they play smart, they’re disciplined, they’re unselfish, they play with enormous chips on their shoulders, they have a stud of a go-to guy (Otto Porter), and unlike so many mid-major teams that match the same criteria, the Hoyas have the size and athleticism to hang with the country’s best teams night in and night out.

You’d have to think that after an easy win over 11th-ranked UCLA and an overtime loss to top-ranked Indiana, Georgetown — unranked in the preseason and an afterthought in this year’s Big East picture — would be a top-10 team if the first college basketball poll came out on Thanksgiving. If you’re a Georgetown fan, you should be ecstatic with how the Hoyas played in the Legends Classic. If you’re not a Georgetown fan, maybe you should be. I suggest you jump on the Hoyas bandwagon now, though, because it will fill up real quick.

Even though Arizona received the higher preseason ranking, the most intriguing West Coast team heading into this season was UCLA, thanks to their top-ranked recruiting class, UNC transfer Larry Drew II becoming eligible, and the fact that Reeves Nelson — one of the biggest turds in the recent history of college basketball — was no longer associated with the team. Arizona may have been (and may still be) the safer pick to win the Pac-12, but there’s no doubt that UCLA has the higher ceiling. But if the Pac-12, which was almost as big of a punchline last year as Anthony Davis’s unibrow, were going to be taken seriously this year, the Bruins needed to have a big season. So far, it has been anything but.

In just this past week, UCLA was lucky to beat UC-Irvine at home, then they were outmatched from start to finish against Georgetown, and Tuesday night they squeaked by the same Georgia team that last week put up 14 points in a half against Youngstown State. Meanwhile, in other Pac-12 action this season, Washington (which won the regular-season conference title last year) lost to Albany at home, Stanford lost to Belmont at home, Utah lost to Sacramento State at home, USC was humiliated by Illinois, and Washington State was beaten so badly by Kansas that Joe Lunardi and his turtleneck are already giving the Cougars a 0 percent chance of making the NCAA tournament. (Shout-out to Colorado, though, which already has impressive wins against Baylor, Dayton, and Murray State.)

The season is still young and UCLA has the talent to win a ton of games, but if the Pac-12 wants to wash away the lingering bad taste of 2012, the Bruins can’t be as underwhelming as they’ve been in the season’s first two weeks.

For the first time since ESPN hired him to wear a sweater, pretend that Kentucky and John Calipari don’t exist, and do everything in his power to avoid dropping F-bombs on live television, Bob Knight was part of a broadcast team for an Indiana basketball game on Monday night for the Hoosiers’ 13-point win over Georgia. This was understandably a big deal for Hoosiers fans, since Knight is Indiana basketball and because the legendary coach’s parting of ways with the school in 2000 was as amicable as a political discussion on YouTube. Even though the school was probably justified in its firing of Knight, the decision to do so was universally criticized by the Indiana fan base, and Knight himself reacted as if university president Myles Brand pooped in his mailbox.

Twelve years later, very few people currently affiliated with Indiana athletics have connections to the Knight era. Because of this, most Hoosiers fans have their fingers crossed that the university’s new administration can get Knight back on campus to honor him in some fashion. But based on what I saw Monday night, it won’t happen anytime soon. As far as I could tell, if Knight had it his way, an unknowing viewer could have watched the entire Indiana-Georgia game without any idea that Knight had ever coached at Indiana.

When the elephant in the room was addressed after the first timeout, ESPN showed a few pictures of Knight celebrating his three national championships at Indiana, prompting Dan Shulman to ask what Knight remembers about those teams. In what should come as no surprise, Knight deflected the question and talked about how all he remembers now is his latest fishing trip. Shulman then insisted that Knight put all jokes aside and reminisce about coaching at Indiana, and even then Knight still didn’t say anything like what someone who was willing to forget the past would say.

Truth be told, the only school Knight seems to have any interest in having a relationship with is Ohio State, Indiana’s conference rival to the east and the school where he won a national championship as a player in 1960. When OSU celebrated the 50th anniversary of that team in 2010, Knight not only showed up for the ceremony, but he also gave a lengthy speech and addressed the crowd at halftime the next day during a game against Minnesota. A year later, Ohio State awarded Knight a University Ambassador medal at halftime of a game against Lamar, and Knight showed up again and spoke to the crowd for a few minutes. This year, he was inducted into the Ohio State Athletics Hall of Fame, and he even agreed to appear in the pregame video that’s shown before all Buckeyes home games this season.

Sure, Knight might just be a proud alum who’s grateful to be honored, but I can’t help thinking that some part of his frequent public visits to Ohio State (and Ohio State’s insistence to repeatedly honor him) are meant to serve as double middle fingers to Indiana, especially considering that Knight has been a mentor to Thad Matta the past few years and Matta has a very real and personal rivalry with Tom Crean.