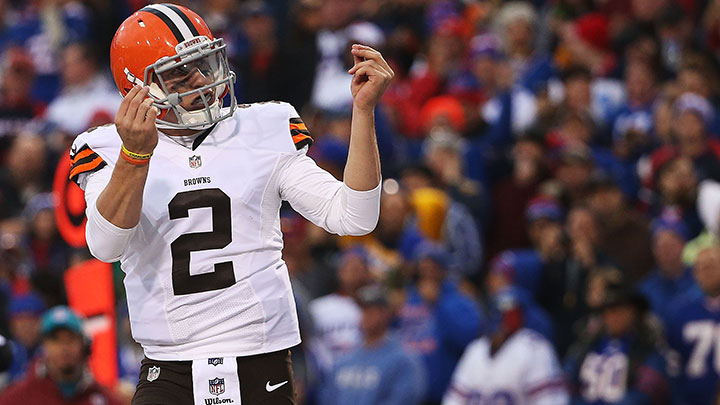 The bread is Johnny Manziel.

My dream for Manziel is the same as my dream for all athletes — that they can live the halcyon lifestyle of professional basketball players, in which guys are free to be manic and goofy and opinionated without some fear that they’ll be seen as dilettantes. Because that is, after all, the secret about Manziel. He hangs out with Drake. He gets photographed at nightclubs chugging champagne on a swan. Fights just happen to start around him. He’s basically an NBA player.

In a master class of delaying the inevitable, the Browns managed to keep Jonathan G. Football — the G. stands for good; no, the G. stands for GREAT — on the bench for nearly his entire rookie year. Instead of starting their Lebanese-American messiah, Cleveland gamely stuck with Brian Hoyer for the better part of a season. As a quarterback, Hoyer couldn’t be less like Manziel if he wore a cape and quoted Rilke in the huddle: According to Pro-Football-Reference.com, no qualifying passer threw fewer touchdowns per pass attempt this year. Hoyer marked a safe, respectable choice for the Browns at quarterback. Safe and respectable is terribly uninteresting, but safe and respectable tends to keep coaches and GMs in their jobs.

There are others in the league like Johnny, mostly at quarterback, but the difference between Manziel and Brady, Manning, Wilson, Luck, and Rodgers is that Manziel isn’t packaged. As amazing as those five quarterbacks are, their idea of personality at this point is raising their voices to sell insurance. I like all of them, but they can leave you a little cold. And when we do see NFL players showing some quirks, like Cam Newton or even Colin Kaepernick, the game eventually wears them down, in one way or another. You do have your J.J. Watts and Steve Smiths — they’re just few and far between. Manziel could join them. Hopefully, he will; but in order to be great, he does still have to be good.

Since his time at A&M, Manziel has been one of the rarest figures in football — a dude who transcends the team. This could be a bad thing, but his teammates have never seemed to dislike him for it; in fact, they’re as enamored with him as some of us are. Manziel is a person worth watching, not just a cog in a football machine. If you aren’t an adherent of Belichick’s Art of War or football’s auteur culture in general, this is a welcome change. It isn’t that Chip Kelly turning offense into the Mad Max reboot isn’t dazzling or enjoyable. It’s just that sometimes you want a little star power.

Blown Up on the Bayou: How the Saints Ended Up in Salary-Cap Hell