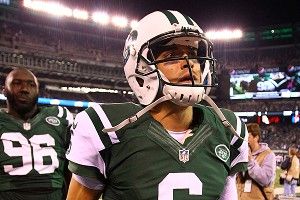 Last night, men named Jason Hill and Chaz Schillens and Clyde Gates were streaking down the sidelines, running routes hard and with tenacity, finding ways to get open. Jeremy Kerley turned into a young Andre Reed. Antonio Cromartie created separation, affirming certain bold proclamations. Jeff Cumberland, a man some will be surprised to learn is not a butcher or tow truck driver living in Secaucus, made an acrobatic touchdown catch. Without Santonio Holmes, out for the season with a Lisfranc fracture, and tight end Dustin Keller, sidelined for four straight games, the New York Jets receiving corp ought to suck. Shockingly, they did not last night. Mark Sanchez, on the other hand, well, he Sanchez-ed. Here’s the math: 14-31, 230 yards, 1 TD, 2 INTs. Both passes were tipped, but it was the 15th time Sanchez finished with two or more interceptions in a game, the second most since 2009 behind Ryan Fitzpatrick’s 17. By comparison, Pickspatrick has 68 touchdowns in that span. Sanchez has 60. In short, Sanchez was dreadful again, about the least inspiring human on the field.

And so, as we watch the Sanchez Era wind down just like the forthcoming final season of Community — intriguing first season; occasionally rousing second; inconsistent-to-the-point-of-mania third; zombie-esque fourth and almost certainly final — it’s time to examine what the Jets must do. In doing so, we are going to ignore the guaranteed $8.25 million he is owed next year. We have to. Or we have to murder Mark Sanchez.

One thing about Sanchez: The guy loves musicals. Another thing: He’s really handsome. Like, Your Girlfriend Just Noticed This Postgame Press Conference She Wasn’t Caring About handsome. That wavy black hair. That shy smile. Those Cindy Crawford–ish birthmarks. He’s dated model Hilary Rhoda, Jamie Lynn-Sigler, and now Eva Longoria. He’s good at this stuff. Not so good at throwing passes. You know who is? Andrew Luck. One thing about Luck, he’s not really the second coming of Kirk Douglas. Nor was Peyton Manning. Or Terry Bradshaw. And have you seen the mug on Sammy Baugh? These guys are not pretty. They’re also hall of famers. Before his disappointing 2012 season, Oklahoma’s Landry Jones and his Kevin Kolb beard were looking aesthetically wrong in all the right ways. Now, let’s just hope West Virginia’s Geno Smith somehow suffers a terrible accident involving an open vat of hydrochloric acid.

This has been a fun experiment, hasn’t it? No, no it hasn’t. Here are the savior’s complete stats through five games: 1-2 passing for nine yards, which resulted in a receiver’s fumble. Five rushes for 19 yards. Two fake punts converted. Several Ultimate Warrior pump-me-up gestures. One indelible shirtless-in-the-rain video loop. Zero snaps of consequence. It’s clear at this moment — after Sanchez’s fourth consecutive game with a less than 50 percent completion percentage — that offensive coordinator Tony Sparano’s vaunted (read: not vaunted) Wildcat plans for Tebow do not exist. For whatever reason — threatening Sanchez’s confidence; hopes of catching the Jags off-guard in Week 14; hatred of the Judeo-Christian power structures in our country — Tebow has been both an afterthought and a distraction. He also makes too much money to do nothing. He needs to go, so he can resurrect a city that really needs him. Like Damascus.

3. Stay Away From USC

Setting aside Carson Palmer’s two standout seasons in Cincinnati in 2005 and 2006, the Trojans have never — never! — produced an elite starting pro quarterback. Since the Jets may very well be on their way (many fans are quietly hoping, praying) to a 4-12 season, there may be some speculation that Southern California’s own Matt Barkley will be styling in green and white by 2013. Don’t do it, Mike Tannenbaum, or guy who replaces Mike Tannenbaum after he’s embarrassingly busted back down to capologist. There’s fool’s gold in them there Woodland Hills. Look to the SEC. Or take a flyer on Lions backup Shaun Hill. Or maybe just let Greg McElroy cash that check his mouth keeps writing. Anything but another Trojan horse.

Last night you may have noticed future Bond villain and the inspiration for Prometheus’s Engineers, Texans defensive end J.J. Watt, batting down all aerial objects within his 147-foot wingspan. That guy’s got reach. This is a reality of the NFL now. Linemen are taller, more agile, and as educated about quarterbacks’ mechanical tendencies as they’ve ever been. Watt studied tape, and then he consumed several of Sanchez’s passes, leading to an interception as well as a game-ending bat-down. After the game, ESPN’s cameras caught him excitedly chortling, “You can’t try to throw it over my head.” Seems like a chill bro. What’s instructive is that slump-shouldered Sanchez, who is listed at 6-foot-2, but plays like 5-foot-11, is incapable of short-game passing because he rarely anticipates defenders’ reach. After yesterday’s game, he told reporters, “We’ve got to do a better job getting those guys’ hands down.” Actually, no. That’s not how that works. That would be holding to pull a defender’s arm down. The next quarterback for the New York Jets should be 7 feet tall, with a Bilas-ian wingspan. If things don’t work out in Charlotte this season, I nominate Bismack Biyombo.

5. Maybe Don’t Use a Quarterback at All

The Jets have scored three offensive touchdowns in their last 16 quarters. At this point, what’s the worst that could happen? Would it really be such a terrible plan to direct-snap the ball to Joe McKnight 48 times in a row just to see the outcome? I would also accept infinity Statue of Liberty plays to Bilal Powell.