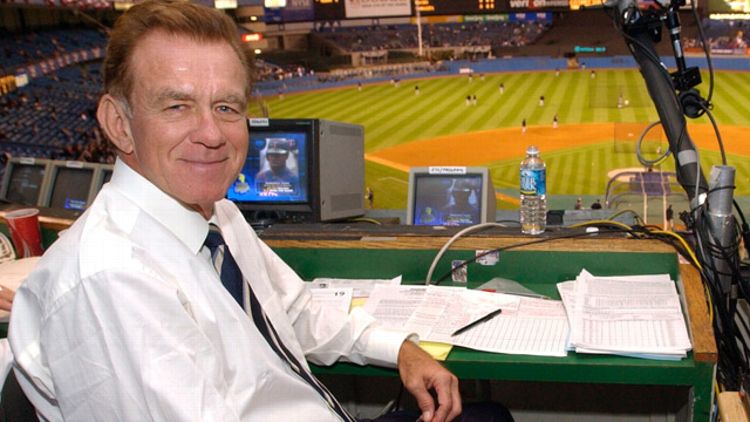 Let’s stipulate that nearly every color analyst who has ever slipped on a network blazer fits into one of two boxes. He — we’re mostly talking about men here — is a Regular Guy. Or he is a Professor. These labels aren’t destiny: Regular Guys can be whip-smart, and Professors can be morons. But the color man is one or the other. John Madden was the ultimate Regular Guy. And Tim McCarver is — was — the classic Professor.

McCarver said Wednesday he’ll leave the Fox booth at year’s end, after calling his 29th(!) consecutive major league postseason. McCarver’s career is a case study in how far you can hustle a mantle of erudition, decisive opinions, and emotional distance. It got McCarver into the Baseball Hall of Fame, but it leaves him, despite his ubiquity at the World Series, despite a career stretching from Jack Buck to Joe, nearly unloved.

McCarver was born in Memphis (bits of the accent remain) and played an astounding 21 seasons in the bigs. Then he began to rise from the pile of athletes shopping for second careers. If you were around in the 1980s, it was routine to hear writers praise McCarver’s big brain. In 1986, Sports Illustrated declared, “Every now and then a sports broadcaster comes along who by force of personality or keenness of insight subtly changes the state of his art. It happened with John Madden and it’s happening again with Tim McCarver.” A year later, a San Diego Union-Tribune profile quoted an academic saying, “He’s uncanny. His command of language is surprisingly sophisticated. One wouldn’t expect that sentence structure from someone who spent all those years behind the plate.”

George Will — of course — quoted him. “Tim McCarver, the first catcher ever to lead either league in triples, once said hitting a triple is better than sex.” McCarver was offered managing and general manager jobs. When he cohosted the ’92 Winter Olympics with Paula Zahn, there were whispers of a big position at CBS.

McCarver wasn’t just eviscerating the dumb jock stereotype. He was eviscerating the friendly jock stereotype. McCarver was determined not to join the “jockocracy” — Bob Lipsyte’s epithet for ex-athletes who prop up their pals. “A lot of players can’t make the break — I made it immediately,” McCarver told the New York Times Magazine. “My job ceased being one of the fraternity the moment I became an announcer.” The break was formally sealed at the 1992 NLCS, when Deion Sanders threw buckets of ice water on him.

McCarver had a method. “Viewers often ask me what I do prior to a telecast,” he wrote in a book. (He wrote four books.) “It surprises them to learn that the broadcast itself amounts to only half of the work I put in on the day of a game.” Who, I wonder, were these astounded viewers? Who didn’t think McCarver got to the ballpark hours before the first pitch, watched batting practice, presided over the calibration of the Catcher Cam, polished references that ranged from Shakespeare to Barry Manilow, and vacuumed up decimal points from the Elias Sports Bureau? There is nothing about a Tim McCarver broadcast that seemed spontaneous, un-workshopped, or flabbily emotional in the Gus Johnson manner. He told an interviewer, “If I go on the air and there’s one thing I didn’t know, it’s like, dammit, why didn’t I know that?”

Standing in the booth (he didn’t sit) and wreathed in cigar smoke, McCarver styled himself as the booming authority. What John Simon was to Broadway theater, McCarver would be to the hit-and-run. “It’s what movie critics and book critics do, pointing out good things and bad,” he told the Times. That was McCarver: our national baseball critic. “If [Barry] Bonds doesn’t run to first base, I’m going to say it,” he declared. “You got to run. That goes for everybody.'”

Let’s bring in John Madden again, who was, in many ways, McCarver’s nemesis. (“I bet you didn’t talk to John about his detractors,” McCarver huffed to the Times.) Madden could be critical of a play call or bad pass. But Madden was forging an emotional and commercial connection with the audience. This was part of Madden’s Regular Guydom. He was cozying up to us.

McCarver’s Professordom — the sense that his only mission was to teach — dissuaded him from doing that. All he offered us was his mind. In fairness, McCarver made some uncanny calls. McCarver more or less predicted Luis Gonzalez’s broken-bat single into shallow center that won the 2001 World Series. Keith Olbermann said it was “the sports-announcing equivalent of Bill Mazeroski’s home run in the seventh inning to defeat the Yankees in 1960.” During the 2011 World Series, Joe Posnanski heard McCarver say Edwin Jackson’s full-count pitch to Nelson Cruz was going to be a slider out of the zone. Jackson threw a slider out of the zone.

But whenever McCarver held forth, Posnanski continued, the writer found himself “wondering if what I just heard was: (1) true; (2) true but misleading; (3) significant in any way.”

If McCarver reigned as a great brain of the ’80s and ’90s, by the dawn of the Internet Age he was enough of a joke to be prey for Family Guy. You could argue McCarver was slipping as he got older. Or you could argue that McCarver was the same guy he’d always been, and that we (a) were wiser, and (b) had a digital mechanism that could reply, “Uh, Tim?”

Among the Professor’s stranger declarations:

• Angels-Twins, 2002: McCarver called the Angels’ Adam Kennedy, who hit three home runs in one game, a “power hitter.” Kennedy hit seven home runs in the regular season. He made the usual fuss over David Eckstein.

• Tigers-Rangers, 2011: “The odds are that [Brandon] Inge is not going to pull the ball down the third-base line … It would be very unusual for him to pull [Alexi] Ogando.” First pitch: Inge pulls the ball over the left-field fence.

It wasn’t just the mistakes. As with many in his age group, McCarver’s erudition ended where advanced stats began. From 2005: “If you can’t run, I could care less about on-base percentage.” (Nobody tell Kevin Youkilis.) McCarver once said he didn’t bother with Bill James’s Abstracts but James, the old devil, won the war. Noting McCarver had written that mere mortals couldn’t appreciate how hard it is to play baseball, James quipped, “It never seems to occur to these people that the same might conceivably be true about writing a good book … Reading McCarver’s book is like watching you or me try to hit against Roger Clemens.” And thus the real baseball brain of the ’80s claimed the throne.

For a guy who was going to wise up broadcasting, McCarver started to compile quite a blooper reel. There he was goofing on a cancer charity; saying strike was a “five-letter word”; blaming climate change for the uptick in home runs; calling social networks “disturbing”; and, notoriously, comparing the Yankees’ cashiering of Joe Torre to the Red Army and the Nazis disposing of their old generals. About the cruelest thing you can say about McCarver is that, in the end, he was like every other jock on TV. He proved the maxim that if you talk long enough, you’ll eventually say something completely crackers.

Madden — to bring him in one last time — had a long sunset in the booth, too, when Web critics began to get fidgety. But Madden had a reservoir of goodwill, and his overweening Regular Guydom won out. McCarver had no goofy commercials, no monogrammed bus, no catchphrase. “I’m not here to please people,” McCarver once said. “I’m here to report and have a good time doing it.” The Professor didn’t want our love and, at season’s end, he won’t have it.

About Last Night: Your Bracket Just Got Orange'd