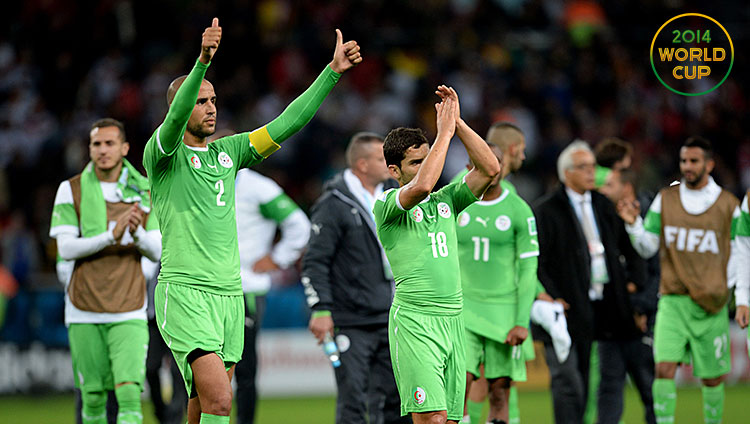 There’s always the temptation to romanticize Cinderella when her story eventually ends. Lots of kind words get written and said about effort, and heart, and determination. The unlikeliness of her accomplishment outweighs the accomplishment itself. It can all be a little patronizing, really. Algeria, which pushed Germany to extra time on Monday, deserves better than that. It’s not just that the team reached the round of 16, it’s how it did so that made it special in this tournament.

It can be hard, amid the constant soccer exposure of the World Cup, to transport yourself back a whole two weeks, before Algeria played its first match, back to when it was not particularly favored to emerge from Group H. The Algerian team took only 25 minutes to disabuse the world of that notion, when it took the lead against Belgium. The Algerians spent the rest of the game defending and frustrating the Red Devils until the favored team resorted to plan B, stuck Marouane Fellaini up top, and clawed two goals back to win.

Algeria put in a defensive performance — the tried-and-true method of the underdog — that wasn’t particularly surprising. You’d expect it from a long shot that found itself ahead. And that’s exactly what made Algeria’s next match so astonishing. Gone was the bunker defense. The Algerians cut South Korea to pieces from the drop. Algeria controlled the ball, and the game, and scored two goals in the first 30 minutes, adding another before halftime before coasting home to a 4-2 win.

It’s exceedingly rare, at any level of football, to see a team play in a number of different ways. It’d be natural to expect Algeria, even as a better team than South Korea, to play a close, boring game and maybe win 1-0. Instead, it was joyous to watch.

The Algerian team revealed a third gear in its final group-stage match against Russia. The Algerians needed just a draw to advance, but after conceding first, they were forced to chase the game. They applied pressure for a long period of time, eventually leading to a second-half goal from a set piece (with perhaps a little help from a laser pointer). Algeria didn’t seem like an underdog, but rather comfortably like the second-best team in its group, taking care of business.

Without the backdrop of those three games, Algeria’s approach against Germany would’ve seemed suicidal, and even with the previous evidence it still raised eyebrows. Manager Vahid Halilhodzic made five changes, dropping the team’s central midfield pair of Nabil Bentaleb and Carl Medjani as well as the influential Yacine Brahimi to the bench, and sending out a team with less experience but perhaps more gas in the tank.

And damned if it didn’t work again. Algeria relentlessly attacked Germany’s weaknesses at full-back. At no point did the team play like an underdog. The Algerians played like equals looking to exploit an opponent.

And they almost did, working 11 shots, five of which came from inside the box. They made German goalkeeper Manuel Neuer have an amazing, proactive game, forcing him to come off his line and snuff out danger all over his own half. (Sometimes you’ll hear people talk about a keeper controlling his own box; Neuer controls his own third of the field.)

Algerian keeper Raïs M’Bolhi was no slouch; he stood on his head to keep Germany at bay into extra time. Eventually, André Schürrle sneaked one by him, and then Mesut Özil smashed in a second to wrap up Germany’s eventual 2-1 win.

It’d be tempting to say that Algeria will be back. The team has some young talent in Sofiane Feghouli, 24; Bentaleb, 19; and Brahimi, 24. Four years is a long time, and qualifying for a World Cup is difficult, especially so in Africa, where the qualification process can be quirky and abrupt. There’s no guarantee the Algerian team will make the trip to Russia. Even if they do, there’s no guarantee they will play like they did this year. In South Africa, for example, they were boring and defensive to a fault. What we do know is that this year the Algerian team wasn’t just an underdog, or a feel-good story, or a Cinderella — it was just a damn good team. The Algerians wouldn’t have been out of place in a quarterfinal against France had the ball bounced differently. That’s a way better story, anyway.