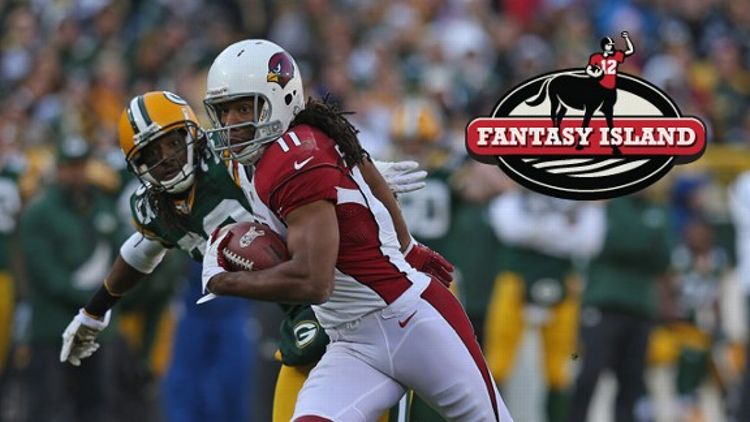 If you have other options, you’ve probably thought about benching Larry Fitzgerald lately. Facing the Atlanta Falcons in Week 11, there’s a good chance you’ll have Fitzgerald on your bench until 12:55 EST, when you come to your senses and take T.Y. Hilton out of your lineup. Look, the Falcons have allowed the eighth-highest YPA of any team in the NFL, and the Cardinals are quietly one of the most pass-heavy teams in the league. Only the Raiders, Saints, and Jaguars have rushed less frequently than Arizona. Fitzgerald isn’t automatic like he once was, but that last-minute Fitzgerald-Hilton swap needs to be made. Just make sure you hit “Submit.”

Please don’t get cute here. Felix Jones is terrible. I know what you’re thinking: “Josh, the Browns are awful against the run! He had 93 and a score last week! You’re very handsome!” Well, reader, I agree on the last two points, but are you sure about the first one? Sure, they gave up 98 and a score to Ray Rice last week, but I’ve seen Ray Rice on TV (true), I’ve met Ray Rice (false), Ray Rice is a friend of mine (totally false), and Felix Jones is most definitely no Ray Rice (absolutely true). So please don’t start Felix Jones. Here’s some analysis that is absolutely terrible and arbitrary on Dez Bryant: Since Week 6, he’s had a great game (13 for 95 and 2 TDs, 5 for 110, 3 for 87 and a score) followed by a terrible game (2 for 14, 1 for 15). Last week he had 14 fantasy points. This week he gets Joe Haden. Just sayin’.

Remember James Starks? No, not the guy on the Knicks. James Starks. The Green Bay RB might just be the best sleeper play of the week. His role in the run game increased last week, and he’s proved better since his return than Alex Green. The Packers face a Detroit D that just gave up 189 rushing yards to the Vikings, and behind a big lead, Starks will be called upon to help run clock in the second half. Don’t be conned by Suh and the Lions D into thinking they are still a dominating front seven.
— Ben Liebman

With the trade deadline looming in most leagues, your top priority shouldn’t be landing a headliner like A.J. Green, but rather getting the best possible man for the FLEX — Dwayne Bowe. Your rival saw him rendered ineffective against the no. 1 passing defense in the NFL on Monday night, but the reality is that his 91 targets are good for eighth in the league. That upper-echelon production reserved for a roster slot largely populated by desperation reaches like T.Y. Hilton or Felix Jones will be everything.

Steven Jackson finally had a 100-yard game and Danny Amendola is back to being Danny Amendola, vacuuming up all the targets in the world. I would bet that these two guys out-fantasy-score the entirety of the Jets offense.

There’s more drama in the Jets locker room than there is at the Petraeus house. Seriously, the Jets have degenerated into The Real Housewives of MetLife Stadium. This week featured a bunch of Jets anonymously ripping Tebow in the New York Daily News, saying that they have more confidence in Sanchez than they have in Tebow. WOW. That is a STINGING slap in the face. Sanchez’s tenure as the Jets QB is a lame duck mess. They’re only playing him because they’re overpaying him. As I’m sitting here thinking about them, I cannot think of another offensive player on the team aside from the two quarterbacks and Stephen Hill. Don’t play a Jet this week unless you’ve been cast in West Side Story.

There are two types of die-hard fans: college football nerds and NFL purists who only follow the college ranks for one week in April. As a proud member of the former constituency, I can admit it’s insufferable when we make the conversation about what small Southern school gave us Steve McNair or attack circumstantial Eagles starter Nick Foles because he was a spread-offense pony at Arizona and also went to Westlake High School in Central Texas — a spread factory that produced Drew Brees but that also produces iconic rich-kid villains that recall J.D. McCoy. The win column won’t budge and Philly’s receipt-paper offensive line will make the unremarkable Redskins’ front four into movie monsters — but Andy Reid handpicked the rookie for plug-and-play schematic continuity. Expect statistical competence from the Eagles’ headliners, and 300 meaningless, fantasy-gold passing yards from Foles.

Somewhere in Marietta, Georgia, Jake Delhomme and Brad Johnson are settling the sins of this circumstantial rivalry over Coors Banquets and corn hole. Cam Newton and Josh Freeman should coax strong performances from the familiarity; start bench fixture Brandon LaFell because of the comfortably numb, 32nd-ranked Tampa Bay secondary. If you caught Doug Martin at Boise State, you saw it all coming: the bloodhound nose for the pylon, an ability to scatter north on draw plays like when he juked TCU’s front seven in the Fiesta Bowl for a red zone score in 2010, the way he extends off-tackle dives by carrying three dudes across your televised yellow line. I own him in four leagues and it’s been the greatest.

I’m not telling you to start Cecil Shorts over Andre Johnson, but you should be thinking about in whose place you can start Shorts, because he deserves it.

The Saints have come back to life quicker than Karl in Die Hard. Just when you think they’re hung by a chain and done, they’re back trying to kill Mr. Winslow. Drew Brees finished the game against Atlanta with three TDs, and Jimmy Graham finally exploded for 146 yards and two scores. Now the Saints go on the road against a Raiders D not known for their stingy play. Brees and the Saints should keep the good times rolling this week. Lance Moore led the team in targets last week, and will lead the team in receiving yards this week. Don’t sleep on Chris Ivory as a viable starting running back. Ivory provided a much-needed spark against the Falcons, and he is now the best running option in New Orleans.

Predictions for this game: Philip Rivers will be intercepted four times, Ryan Mathews will get into a fumble contest with Willis McGahee (and win), Malcolm Floyd will hold up a sign on the sidelines saying “SWEET GOD PLEASE GET ME OUT OF HERE,” and immediately following the game Norv Turner will be given a six-year extension.

Norv Turner is edging toward the red area on my Carson Palmer Fury Meter.

Peyton Manning completed 80 percent of his passes for 300 yards and three TDs versus against the Chargers when they met in Week 6, and that was before Demaryius Thomas blossomed into a top receiving threat. No matter how well the Chargers do on defense (I predict average), the Charger offense won’t have enough juice to win this game.

The Patriots’ turnaround on defense has been impressive, but they’re still vulnerable in the back end. New England has surrendered the sixth-most passing yards and third-most passing touchdowns in the league. You’ll obviously start Reggie Wayne if you have him, but Avery is a great flex option this week. The Patriots always take away the opponent’s top option on offense (see Larry Fitzgerald’s four yards in Week 2), so Avery could very well see as many targets as Wayne. Averaging 85.6 yards over his last two games, look for Avery to top the 100-yard mark and score a touchdown on Sunday.

Ravens-Steelers, where fantasy football goes to die. I legitimately expect the defenses to score more fantasy points than any player in this game, save for Ray Rice. Don’t even think about starting Joe Flacco. Same goes for Dennis Pitta, Jonathan Dwyer, and the injured Antonio Brown. Frankly, if I owned Mike Wallace or Torrey Smith, I’d be worried as hell about each getting helped off the field. Ryan Clark and Terrell Suggs have no regard for your fantasy team, and that’s a scary thought.
— Matt Borcas

Let’s get controversial; the Bears’ run defense isn’t that good. No, for real. Yeah, they’re ranked fourth in the NFL in rushing yards allowed, but that’s because teams haven’t been in games long enough to run the ball late. Only one NFL team — the Houston Texans — has faced fewer rushes than the Bears. In terms of efficiency, Chicago is in the middle of the pack. At home and with an offensive philosophy that just screams “all we want to do is be in the game late,” the 49ers are going to be in the game late. And the San Francisco coaches have just the right amount of stubbornness that fantasy owners of high-volume running backs love.