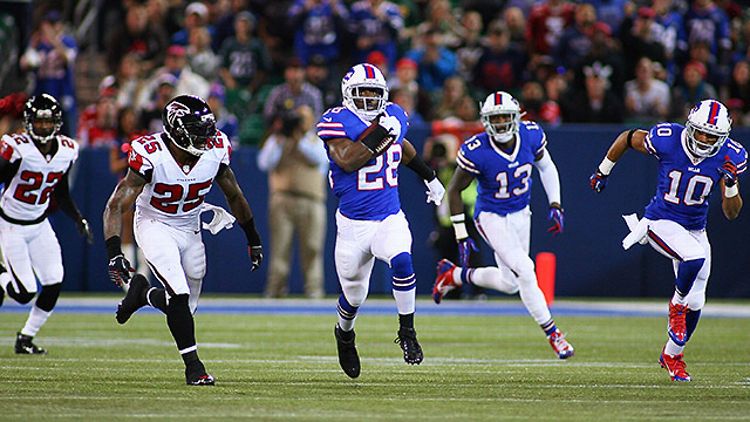 It’s playoff time! Apparently, C.J. Spiller does not want you to enjoy it. It wouldn’t be the fantasy postseason without major roster dilemmas, and Spiller provided a doozy on Sunday.

After five single-digit fantasy outings in his last six games, Spiller sprang to life against Atlanta, rushing for 149 yards and a touchdown on 15 carries. Of course, it wasn’t all positive: He also re-aggravated his perpetually injured left ankle, hence Fred Jackson’s 11 carries. What’s more, two runs (a 77-yarder and a 36-yarder) made up the bulk of Spiller’s production. He was held to three yards or fewer on nine of his carries by one of the worst run defenses in the league, and next week’s opponent, the Bucs, boast a solid run-stopping unit. I bet some Spiller owners wish he’d posted one of usual 8/20/0 lines, which would have allowed them to confidently walk away at last.

Is Spiller back, or was his fruitful outing in Toronto a one-time thing, buoyed by a night on the town with Rob Ford? Will Spiller be able to handle Tampa’s stout run defense? And how does Jackson factor into all of this? These are the questions owners must answer this week, whether they like it or not, because the postseason doesn’t reward indecision. I’ll get back to you on Thursday with a final ruling on Spiller. In the meantime, let’s recap the final week of the fantasy regular season.

• Just Your Typical 30-Point Day: When three wide receivers not named “Megatron” clear 35 fantasy points in a given week, it’s essential to power-rank their performances so that future generations can fully appreciate their awesomeness. What follows is the definitive (and only) guide to the elite receiver play we saw on Sunday, December 1, 2013. Print this out and put it in a time capsule or something.

… but also because Jeffery managed 12 receptions, 249 yards, and two touchdowns. Jeffery has caught more balls than Brandon Marshall in three of the Bears’ past four games, which is either a sign of Josh McCown’s personal affinity for Jeffery or a changing of the guards within Chicago’s receiving corps. It’s probably just the former, but it’s fun to think about the latter.

2. Josh Gordon (38 points): Last week we talked about how Brandon Weeden’s unparalleled shittiness actually boosts Gordon’s fantasy value, because Weeden never looks off his primary read, and his primary read is usually Gordon. In Week 13, Gordon missed a significant chunk of the second half after taking a vicious helmet-to-helmet hit, yet proceeded to return and catch a 95-yard touchdown pass, with roughly 70 of those yards coming after the catch.

3. Eric Decker (41 points): Four touchdowns per game is more or less what we expected from Decker coming into the season, but he deserves kudos for moving Knowshon Moreno to tears.

• Kick-starting Your Fantasy Dreams: Indianapolis and Baltimore are quarterbacked by a no. 1 overall draft pick and a Super Bowl MVP, so it’s no surprise the Colts and Ravens leaned on their world-beating kickers to carry them to victory in Week 13. Adam Vinatieri tallied 20 fantasy points on the day, outscoring Gronk and Megatron, and the Ravens-Steelers box score reads like steamy fanfic from a placekicking aficionado.

Relatedly, I have a theory about Mike Tomlin’s infamous stanky leg, which potentially prevented Jacoby Jones from returning a third-quarter kickoff for a touchdown. Contrary to popular belief, Tomlin didn’t do it to give his team a significant competitive advantage, because that wouldn’t be worth a six-figure fine and possible lost draft pick. No, Tomlin did it because Tucker is on his fantasy team, which must’ve needed a win to clinch a playoff berth. Frankly, this makes Tomlin’s move perfectly understandable and perhaps even sensible. Every point matters, and PATs are a pittance compared with field goals. As is $100k.

• You’ve Been Warned: Psychologists and Drew Brees often talk about the fear of missing out, a form of social anxiety for which the poster children are all those who kept Roddy White and/or Steven Jackson in their starting lineup through, like, Week 11 despite reams of evidence suggesting both players deserved to be benched. It’s really hard to give up on a high draft pick, but it’s really easy to convince yourself that a high draft pick is about to turn things around, and that’s where the FOMO sets in. So of course White (14 fantasy points) and Jackson (20) had their best games of the season once their percent-started figures dipped to 59.7 and 60.4, respectively, among ESPN.com owners, justifying the initial FOMO and starting the whole process over again.

Now some playoff-bound owners might be tempted to reinsert White and/or Jackson into their lineups. While I can understand the rationale for using Jackson at flex, treating White’s 10-catch, 143-yard day as anything but a massive outlier is a mistake. Harry Douglas and Tony Gonzalez are seeing targets on a much more consistent basis than White, who’s also still hobbled by ankle and hamstring injuries. White followed up his last (and only other) semi-decent fantasy performance with an absolute clunker, and the not-insignificant possibility of another worthless stat line makes him too risky for postseason use.

• The Tate Modern: Here are the running backs who scored two points in Week 13: Bruce Miller, Stanley Havili, Jacquizz Rodgers, Mike Gillislee, and Dennis Johnson. Pick them all up now, because one of them will surely top next week’s scoring leaderboard. That’s what Ben Tate taught us on Sunday by posting a 22/102/3 stat line immediately following a game in which he could only muster two fantasy points against the Jags’ horrendous run defense. Tate faces that same horrendous run defense this week, and I have no idea what to expect. On the one hand, he’s only found the end zone once outside of Week 13; on the other hand, he resembled Arian Foster against the Patriots.

Tate will probably fall somewhere between those extremes, placing him in the low-end RB2 range this week.

Poor Glennon was no match for Riverboat Ron on Sunday, but we’ll always remember the QB for (1) notching 15 fantasy points in Seattle (take that, Brees), (2) handing off to the great Bobby Rainey, and (3) outshining Matt Ryan and Matthew Stafford in head-to-head matchups. Whatever else there is to say about the 2013 fantasy season, Glennon was once considered a savvy waiver wire pickup, and that’s something to cherish for the rest of our lives. The Bucs were in complete disarray back in September, and it was Glennon who steadied the ship, conveniently hurting his team’s chances in the Bridgewater/Mariota sweepstakes, thereby potentially giving us another year of Glennonsanity. See how selfless he is? His fantasy value may be kaput, but the memories will last a lifetime.

1. RB LeGarrette Blount, New England Patriots (available in 95.2 percent of ESPN.com leagues): In the wake of Stevan Ridley’s benching, Blount saw more carries than Shane Vereen and Brandon Bolden in Week 13, especially near the goal line. With Vereen maxing out at about 10 carries per game, Blount’s workload will stay steady if Ridley continues to ride the pine. (Which of course remains a mystery, because Bill Belichick hates you.)

2. RB Jonathan Dwyer, Pittsburg Steelers (99.7 percent): Le’Veon Bell suffered a violent concussion against Baltimore and may not recover in time to play against the Dolphins. That he gets nine days of rest instead of the standard six obviously improves Bell’s chances of suiting up, but if he doesn’t suit up, Dwyer should assume a sizable portion of the workload. Felix Jones’s presence complicates matters a bit, but Jones has burned wayyyyy too many fantasy owners in his career to be a legitimate consideration.

3. WR Ace Sanders, Jacksonville Jaguars (99.8 percent): NOTE: This recommendation is for PPR leagues only, where Sanders has scored 38 fantasy points in his past three games. Save for a date against the Titans, his remaining schedule isn’t very difficult, and Chad Henne is targeting Sanders more frequently than Cecil Shorts lately. Additionally, as someone who attended Sunday’s Browns-Jaguars game and sat behind Jacksonville’s sideline, I can personally attest to the strength of the Henne-Sanders relationship. They chitchatted throughout the afternoon, sipping Gatorade and sharing tales of their Black Friday experiences (presumably), and that’s gotta mean something for Sanders’s fantasy value.

4. QB Jay Cutler, Chicago Bears (51 percent): Cutler says his goal is to play in Week 14, so rejoice if you’ve been relying heavily on Alex Smith or Carson Palmer or Glennon to replace your hurt/underperforming quarterback’s production. Even if Cutler sits out another week, he’s worth adding in case you end up needing a quarterback later in the playoffs. Owning a surplus of running backs and receivers is sensible in the regular season, but less useful during the playoffs, so adjust your roster accordingly.

The LaDainian Tomlinson Challenge was the most challenging Challenge of the Week thus far by virtue of Tomlinson being retired, so it was heartening to see so many of our valiant challengers emerge victorious.

@mattborcas you can't see it cause it didn't fit on the screen, but I also left Bell, Spiller, AND Tate on the bench pic.twitter.com/vVhyteoz8j

@mattborcas this is wk12 but… was down by 7 with 9ers D against Gore&RG3. we tied, then i got the stat correction W pic.twitter.com/cdJAmG7k8f

@mattborcas Only one attempt this week but Decker/Jeffery pulled it off! 4 for 4 now on the year. pic.twitter.com/lhw8r6fSFL

You can say @truenorthman’s win stemmed from Decker’s and Jeffery’s earth-shattering performances, but I like to think it wouldn’t have happened without LT watching over his team like a guardian angel. If anyone has any suggestions for the Week 14 challenge, please leave them in the comments. Congrats to all our winners!