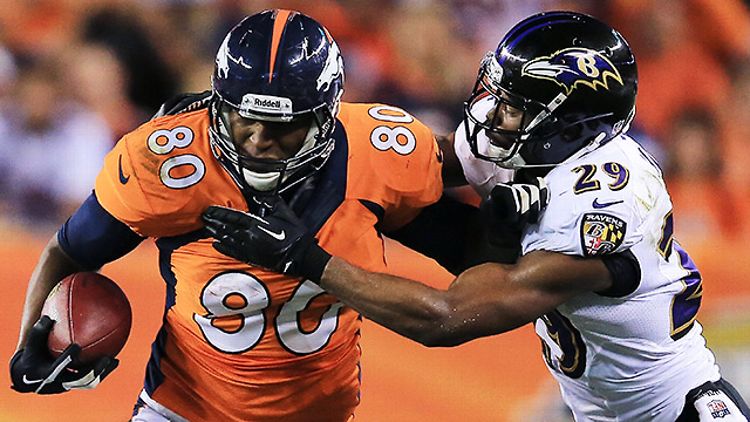 If it’s possible for someone who shares a bed with one of the world’s leading supermodels to have a bad night, Tom Brady’s Thursday must’ve sucked. I assume Brady howled like a werewolf at the sight of erstwhile blood brother Wes Welker snagging two touchdowns from Peyton Manning. I hope Brady went to bed before Demaryius Thomas’s pair of fourth-quarter scores, because he probably had a hard time talking himself into Kenbrell Thompkins as a pro-caliber deep threat after Thomas’s display. I feel for Tom Brady.

I can also relate, since Thursday wasn’t my best night, either. Back in August, I vehemently argued that Eric Decker was a better fantasy option than Welker, and scoffed at the idea of drafting Julius Thomas. Naturally, Welker and Thomas scored two touchdowns apiece, combined for 177 yards, and generally dominated the defending Super Bowl champs in the opener. Perhaps I should visit a soothsayer before making any more Denver prognostications, lest I start sounding like the Columbus Dispatch.

And yet … it doesn’t take a seer to predict that Peyton Manning won’t throw seven touchdowns in a game again this season. That means it’d be unwise to let Manning’s awesome-but-aberrational performance skew our understanding of the Broncos’ offense. For example, despite making multiple trips to the end zone on Thursday night, Welker remains a poor red-zone threat compared to other top-flight fantasy receivers. Decker’s 13 touchdowns in 2012 dwarfed Welker’s six, and the two will probably finish with relatively similar totals this season.

To illustrate how random touchdowns can be over the course of a game, consider that Decker dropped a would-be score against the Ravens on a drive that ultimately ended with one of Welker’s touchdowns. If Decker — who admittedly had a really bad game, but whose track record is strong enough to survive one poor outing — simply makes that catch, he finishes the game with roughly 10-11 fantasy points, and far fewer people exit Thursday trumpeting Welker’s emergence as Manning’s clear-cut second option. Moreover, John Fox still has “extreme, great confidence in Eric,” and Decker has vowed to “Watch, learn, [and] flush,” his performance down the toilet, which is the most beautiful response to adversity I’ve ever heard. If you don’t own Decker, make an offer for him STAT — his value is at its nadir, and impatient owners are habitually receptive to lowball trade proposals.

As for Julius Thomas, I’ll concede that Manning targeted him more than I expected. If you can accept that the tight end might (a) never top his Week 1 performance, and (b) is coming off two injury-plagued seasons, feel free to add him, especially if the Zach Sudfeld bandwagon — another reason to feel bad for Brady! — left you bruised and battered and desperate for a tight end (more on that later).

Julius Thomas isn’t the only player worth adding, however. Here’s a position-by-position look at this week’s top waiver-wire targets, ranked in descending order of desirability, plus some other nuggets to help you win.

• EJ Manuel, Bills (available in 86.7 percent of ESPN.com leagues): I put a claim in for Manuel this week, and I don’t even need a quarterback. You should, too. First of all, he’ll suffice as a nice backup. Of the three quarterbacks listed here, all of whom are first-time starters who played surprisingly well in Week 1, Manuel enjoyed the kind of success that’s by far the most sustainable. Manuel is surrounded by an elite running back, an assortment of dependable passing options, and a seemingly competent head coach. He looks like a better passer than his fellow rookies right now, and he figures to be a consistent rushing threat once he fully heals from a minor knee procedure. There’s a chance that Manuel explodes like RG3, Colin Kaepernick, and Russell Wilson did last year, and that mere possibility makes him a must-add player, whether or not you really need him.

• Terrelle Pryor, Raiders (91.6 percent): Unless Pryor is going to channel Michael Vick circa 2002, you can’t expect 100-plus rushing yards out of him every week. Pryor also has far less talent around him than Manuel. Darren McFadden averaged 2.8 yards per carry on Sunday and will probably be in a cast by Week 6; Rod Streater and Denarius Moore form the NFL’s least-imposing receiving corps; and 95 percent of the football-watching populace has never heard of tight ends David Ausberry and Jeron Mastrud. But like Manuel, Pryor brings the dual-threat ability that’s hard to ignore. He’s not a starting option yet, but he’s worth a flier if you really need a quarterback.

• Don’t do it: Geno Smith, Jets (95.9 percent): He looked good in the opener. Much better than he looked this preseason, at least. But with all due respect to Smith, the flames of the smoldering dumpster fire that is this Jets team will likely engulf him sooner or later and turn every shred of his fantasy value into molten ash. This is a move only truly desperate owners should consider.

• Joique Bell, Lions (18.7 percent): Bell is not going to average two touchdowns per game this season. Goal-line scores are notoriously unpredictable on a week-to-week basis, so you shouldn’t add Bell to your roster thinking he’s a LenDale White–esque complement to Reggie Bush. However, you should add Bell to your roster because of his presence in the Lions’ passing game. He caught five balls for 67 yards against the Vikings, making him flex-worthy in PPR leagues, and he can serve as a temporary replacement for Shane Vereen (who’s going to be out for a month or so with a broken wrist) or Giovani Bernard (who’s still mired behind BenJarvus Green-Ellis in the Bengals’ backfield).

• Da’Rel Scott, Giants (99.3 percent): Honestly, I don’t know much about Scott. Supposedly he was the Humanitarian Bowl MVP in 2008, but I’ve largely avoided watching Maryland football since the Vernon Davis–Shawne Merriman era. Nevertheless, Scott made the most of his opportunity on Sunday night, rushing for 23 yards on five carries in the aftermath of David Wilson’s two fumbles, and might start in this Sunday’s Manning Bowl. Of course, nothing’s ever easy with Tom Coughlin, who has invited veterans Willis McGahee and Brandon Jacobs to audition and could add another back to the mix. Keep an eye on this situation, because if anyone other than Wilson seizes the job, Scott, McGahee, or Jacobs will be widely available.

• Trade tip: Bryce Brown, Eagles (2.1 percent): Brown is owned in the vast majority of leagues, so you can’t add him. But you should trade for him. Philly’s offense looked incredible Monday night, and more than capable of sustaining two fantasy-relevant backs. And yet, few owners would hesitate to swap the backup for a middling receiver. Brown will see some carries regardless, but he’d become enormously valuable if LeSean McCoy got hurt, which is a distinct possibility considering McCoy’s heavy workload. Brown’s upside makes him well worth a roster spot.

• Julian Edelman, Patriots (84.1 percent): Basically, Edelman received all of the targets folks expected to go Sudfeld’s way, and appeared to be a potent weapon in the red zone and in the middle of the field. Edelman also returns punts, which could make him even more valuable depending on your league’s scoring. Rob Gronkowski will eventually diminish Edelman’s value, but Gronk isn’t back yet. What’s more: It sounds like Danny Amendola could miss Thursday’s game with a groin injury, making Edelman an essential addition this week. Gronk is out, Vereen is out, and Amendola might be out, too. Who else is Brady going to target, Thompkins? Please.

• Brian Hartline, Dolphins (65.4 percent): Ryan Tannehill and Hartline had a striking rapport on Sunday, connecting nine times for 114 yards and a touchdown. Meanwhile, Mike Wallace spent the day on Haden Island and finished with a single reception, which made him very, VERY unhappy despite his team’s 23-10 win. “I don’t feel like talking,” Wallace bellyached to reporters after the game, which, to reiterate, was a season-opening victory on the road. As long as Wallace keeps bitching (and drawing coverage from the opposition’s top corner), Tannehill should keep looking to Hartline, who has the skills to succeed on more than just fly patterns.

No I can't give out an injury report before the game. I play real football and it would be stupid to tip the other team off and say I'm hurt

C’mon, people! You really expect White to give you injury updates hours before kickoff? As he notes, you should recognize that a player being limited in practice all week is a major red flag that warrants a demotion to your bench. At any rate, White figures to have a few more limited practice weeks as he nurses a high ankle sprain, making Douglas a low-end WR2/high-end WR3 in most formats. Unfortunately, Douglas’s value is contingent upon White not playing, so go for Edelman or Hartline instead if you have the choice.

• Jordan Cameron, Browns (67.5 percent): One of the most impressive surprise fantasy performances of Week 1 came from Cameron, who didn’t let Brandon Weeden’s inherent horrendousness keep him from a 109-yard day. We can’t trust much from Cleveland’s offense, but we know that Cameron is going to be a focal point, especially this week against the Ravens while Josh Gordon is out.

• Julius Thomas, Broncos (27.4 percent): Continuing the Thomas and Sudfeld talk I began in the intro: Both Thomas and Cameron are suitable replacements for Sudfeld, who should be cut if he no-shows on Thursday night against the Jets.

• Uh, no: Kellen Winslow, Jets (97.3 percent): Unless you’re in a league with me, don’t add Kellen Winslow. You’re better than that.

Then again, maybe we shouldn’t even play out the rest of the season. Based on last night, whoever drafted LeSean McCoy seems destined to win.