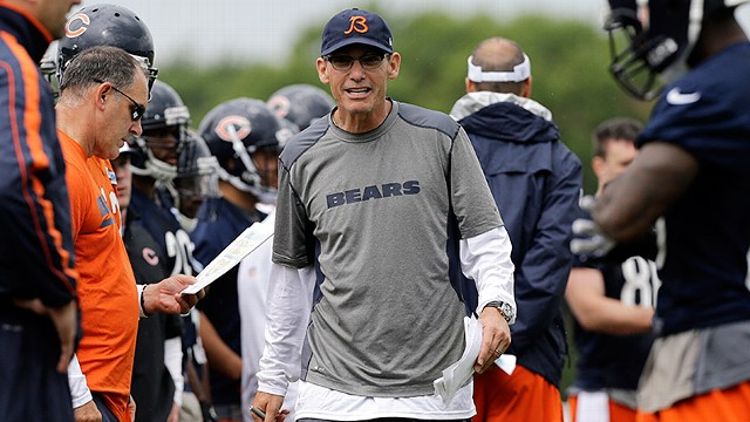 Before we rank the new NFL head coaching hires on the basis of fantasy-friendliness, it’s important to note that each coach’s ranking largely depends on the situation that preceded him. For example, if the Chiefs had hired, say, Charlie Weis to replace Romeo Crennel, Weis would’ve earned high marks here solely because Romeo was so breathtakingly terrible. (Seriously, with the ungodly QB platoon of Matt Cassel and Brady Quinn, why didn’t Jamaal Charles crack 300 rushing attempts last year?) But if the Patriots randomly decided to can Bill Belichick and name Weis his successor, Weis would almost definitely finish dead last in these rankings, barring Lane Kiffin being hired by the Cowboys, which would cause the universe to collapse on itself. With that in mind, here’s 2013’s freshman class of NFL head coaches (plus Andy Reid), ranked from least to most fantasy-friendly.

“I think our quarterback room is as strong as any in the National Football League.”
— Bruce Arians, 4/2/2013

Is Bruce Arians crazy? For PR purposes, I understand the need for a new coach to pump up a historically downtrodden fan base, but he might as well have promised to give away pet unicorns and pixie dust to the first 100 fans at Cardinals training camp. Between these remarks and the Kangol hats he was caught sporting at the combine, something must be up.

Moreover, it’s hard to feel good about Arians’s prospects as a head coach when the circumstances surrounding his hire were so problematic. The notion that Ken Whisenhunt — who only turned around the Cardinals overnight, led them to their first Super Bowl, and came within inches of winning it — deserved a pink slip was laughable; if anything, he should’ve been lauded for winning a whole five games with the four-headed Dumpster fire of John Skelton, Kevin Kolb, Ryan Lindley, and Brian Hoyer at QB. And while Whisenhunt’s firing was unwarranted, to follow it up with the hiring of Arians made it an epic injustice. If you don’t remember Arians’s three-year stint in Cleveland as offensive coordinator from 2001 to 2003 (the Browns finished 25th, 19th, and 29th in points per game during this period), surely you recall his shaky tenure in Pittsburgh. Despite the success the Steelers enjoyed while Arians was there, he was best known for angering Steelers fans with his dubious and often reckless playcalling, which manifested itself in key interceptions, low points-per-game totals, and a host of injuries to Ben Roethlisberger. (Of course, much of the blame for those injuries lies on Roethlisberger himself, as his improvisational style of play rendered him more susceptible to bodily harm than the average QB, but Arians refused to make any logical adjustments — like a more balanced run-pass ratio, for example — that would’ve curtailed the many weeks Ben spent languishing on the injury report.)

Ultimately, the Steelers had to fire Arians. He wound up in Indy with first-year head coach Chuck Pagano, was handed the NFL’s most highly touted QB prospect since John Elway, and crazy shit happened (e.g., the Colts went 9-1 in one-score games, a totally unsustainable figure). It would be unfair to not give Arians any credit for Indy’s performance last year, but he certainly doesn’t deserve enough to negate his previous wrongdoings and suddenly be deemed a legitimate head coaching candidate. (Not to mention anything of the fact that he’s 60 years old and just now getting his first head coaching opportunity, which raises a number of questions about why NFL teams with vacancies have consistently avoided him for nearly two decades.) I think Carson Palmer has some comeback-season potential with Larry Fitzgerald and Michael Floyd at his side, but Arians’s presence ensures that any success achieved by Palmer will be short-lived.

Confession: I wanted to throw the Jags fans a bone by suggesting that folks should take a flyer on Jacksonville’s D/ST, considering the 172 fantasy points that Bradley’s Seahawks tallied last year. However, once I stepped away from my morning bath salts, I remembered that we are AT LEAST two years away from this being a smart pick.

Chan Gailey may not have been a good head coach, or even an average one, but he was surprisingly decent to fantasy owners. Who among us didn’t claim Ryan Fitzpatrick or Scott Chandler off the waiver wire in 2011? Hell, there was a time when I was genuinely excited to have DAVID NELSON on my roster, and I know I wasn’t the only one.

Doug Marrone is undeniably a step up from Gailey, though — dude was Sean Payton’s offensive coordinator in New Orleans from 2006 to 2008 and won two bowl games at Syracuse, which is like winning two national championships at most schools. Fantasy owners will appreciate him for two main reasons. First, EJ Manuel has the potential to set the world on fire, at least for a few weeks; this can’t be said for any other rookie QB (well, except for Tyler Bray, but in that case we’d literally be referring to arson). Second, C.J. Spiller is now Buffalo’s clear-cut starting RB, a decision Gailey stupidly never made despite investing a high first-round pick in him. Spiller’s productivity has steadily increased since his rookie season, and he is now primed to enter the elite tier of fantasy RBs.

First things first: Will Andy Reid bring Taco Tuesdays with him to Kansas City? Here’s a semicomprehensive breakdown of the situation:

Pros: Kansas City–area Chipotles see a massive increase in revenue. (Granted, this will be slightly offset by the departure of Romeo Crennel.)
Cons: Jamaal Charles gets super fat and never scores another touchdown.

As you can see, the risks associated with Taco Tuesdays greatly outweigh the potential rewards. Still, Reid will have a net positive effect on the Chiefs, but he won’t dramatically alter anyone’s fantasy value, although Charles should be used in a better way than he was before.

Michael Vick will probably definitely be hurt by Week 6, so it’s difficult to argue that Kelly will increase his fantasy value. When Vick is healthy, though, I anticipate an appreciable uptick in his rushing stats. As I noted in last Thursday’s QB power rankings, the best possible scenario with regard to Vick is flipping him for a valuable RB/WR/TE if he gets off to a hot start.

Kelly’s real impact will be felt on LeSean McCoy and Bryce Brown. McCoy will obviously get the lion’s share of carries and be his usual productive self, but Brown (who showed flashes of fantasy value last season) could even prove to be worthy of a FLEX play by midseason. Kelly often used two running backs at Oregon, and considering the Eagles’ relatively poor situation at QB, there will be plenty of touches to go around for both McCoy and Brown. Finally, Kelly has three starting-caliber tight ends in Brent Celek, Zach Ertz, and the underrated James Casey, and he’s indicated that he plans to use all three at the same damn time. As it stands now, I wouldn’t actually draft any of these guys, but Ertz has the most potential and could eventually merit an early-season pickup.

Philip Rivers isn’t the same player he was from 2008 to 2010, when he led all QBs in yards per attempt. Norv Turner’s inexplicable inability to grasp this is why he’s now an offensive coordinator. According to the Chargers blog Bolts From the Blue, “Rivers was downright horrible on passes thrown 20 yards or more last season. He completed just 36 percent and posted a dismal 65.4 quarterback rating compared to his 39 percent and 92.8 marks since 2008 on such passes.” By contrast, his completion percentage and rating for passes thrown 19 yards or less were consistent with his career averages.

Two reasons Rivers will improve in 2013:

1. Pro Football Focus ranked San Diego’s offensive line no. 28 in football last season. Michael Harris, an undrafted free agent, started at left tackle and was rated worst in the NFL by PFF. Of course, the Chargers’ poor line play shoulders much of the blame for Rivers’s deep-passing woes. First-round pick D.J. Fluker and free-agent signees King Dunlap and Max Starks (who are only OK, but still upgrades over Harris) should bolster the O-line, thereby providing Rivers with more time in the pocket to consider his options.

2. McCoy, who has won the AFC West with QBs as varied as Tim Tebow and Peyton Manning, has added “shorter, more conservative throws” to the Chargers’ playbook in an effort to make Rivers a 70 percent passer. It’s the dreamers of the day who are the most dangerous men!

The 2007 Browns were responsible for roughly 70 percent of the best moments of my NFL-watching life, so I’m incapable of objectivity with regard to Chud, who was the team’s offensive coordinator. But if he could help make something as ridiculous as this happen, then, Kevin Garnett was probably right. Let the record show, though, that Chud is no one-hit wonder. In his two seasons as Carolina’s offensive coordinator, 2011 and 2012, the Panthers ranked 10th and fourth in offensive efficiency.

While Brandon Weeden might already be a lost cause, I think Chud will work his fantasy magic on the Browns’ receivers, particularly Josh Gordon. Despite his two-game suspension, Gordon is worth a late-round flyer because the flashes he exhibited in Pat Shurmur’s antiquated offense should translate tenfold to Chud’s downfield attack, where guys like Braylon Edwards, Vincent Jackson, and Steve Smith thrived. It’s scientifically impossible for Chud to be a worse head coach than Shurmur, so I’m buying.

Real facts of the metric system: 2 CFL championships (Grey Cups) = ½ of a Vince Lombardi Trophy. This is simple math, as the CFL has eight teams compared to the NFL’s 32. Therefore, Marc Trestman is already 50 percent of a legendary NFL head coach.

Over at the indispensable RotoViz, Charles Kleinheksel attempted to translate Trestman/Aaron Kromer–led offenses to the 2013 Bears, and came up with some tantalizing results. (Kromer, who was the Saints’ interim-interim head coach last season, is now Chicago’s offensive coordinator.) In a nutshell, Jay Cutler should be pushing 600 pass attempts, potentially elevating him to near–top 10 status among QBs. Furthermore, Trestman’s running backs have traditionally ranked high in team receptions, which bodes extremely well for Matt Forte. Kleinheksel determines that Forte, who was already a stud in PPR leagues, “will see a significant increase in catches,” and could very well be a top-five back in standard leagues. After Paulina Gretzky’s Instagram account, Trestman may be Canada’s greatest contribution to American society.

10 Sensible Rules for Golfing With Others